First the staff. Then the inmates.

Thursday afternoon’s report from the Florida Department of Corrections reveals evidence of community spread at one prison.

The Blackwater River facility in Milton has 30 COVID-19 cases among inmates, up from four the day before, representing by far the biggest movement in prison-related cases.

Blackwater is privately run by the GEO Group. Built in 2009, it houses 2,000 male inmates.

The Sumter Correctional Institution facility in Bushnell has the other confirmed case of the novel coronavirus, a disease that criminal justice reformers and Democrats warned would get into the prison system.

One of them was at Blackwater, pushing the number at that facility up to six.

Hamilton Correctional Institution in Jasper has the other new case.

Gov. Ron DeSantis’ administration, which resisted the release of immunocompromised inmates, won’t reveal the number of inmates or workers who have been tested for COVID-19, or how many prisoners are in medical isolation due to the virus.

In late March, the Department of Corrections expressed confidence that it would be able to contain the virus, “closely monitoring developments” and “fully prepared to handle any potential cases of COVID-19 within the state-operated correctional institutions in Florida.”

To that end, the department restricted inmate contact with the outside world.

Visitation was also blocked to “minimize the potential risk to the inmate population and staff … This decision has been made in close consultation with our partners at the Florida Department of Health and with correctional best practices being reviewed nationwide.”

The reporting schedule was slightly modified on the data released Thursday.

It was timestamped at 1:00 P.M., rather than the 10 A.M. release in recent days. But it surfaced on the website closer to last call. 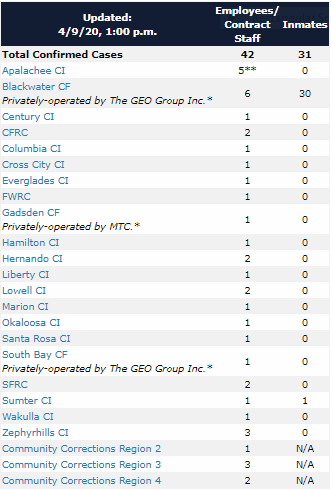 previousHow gig economy workers are coping with the coronavirus pandemic