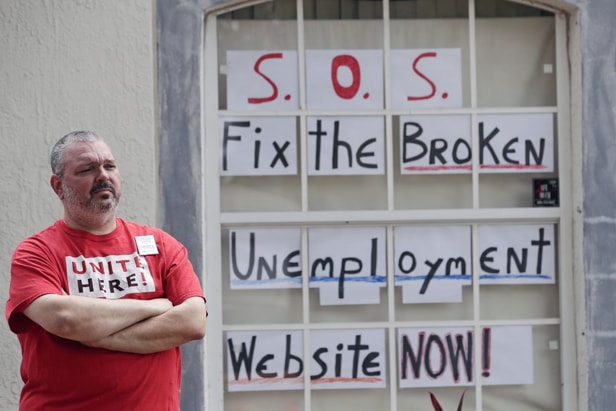 'This system has been failing for years. Somebody needs to speak up.'

Some of the 43,000 workers whose unions reached a deal with Walt Disney World over the weekend on temporary furloughs that allow them to keep their benefits aren’t going quietly. They staged stay-at-home protests Monday aimed not at their employer but Florida’s beleaguered unemployment system.

On a sidewalk outside her apartment building in suburban Orlando, Lacey Gamble, a server at Epcot, and her 5-year-old daughter, used colored chalk to draw pictures of Lumiere from the Disney movie “Beauty and the Beast” and Sulley from “”Monsters Inc.” They also scrawled in green and yellow chalk “SOS. #WorkersCan’tWait.”

Other Disney workers across metro Orlando were doing the same, hanging signs in windows at home and scrawling messages on mailboxes aimed at sending a message to state officials: the unemployment system needs to be fixed.

“This system has been failing for years. Somebody needs to speak up,” Gamble said. “We need to feed our children. We need to pay our bills.”

Disney World has been paying its workforce — which numbers 77,000 employees — since it closed its doors in mid-March because of the spreading new coronavirus, but it plans to start indefinite furloughs next week. That’s when tens of thousands of Disney workers will try signing up for Florida unemployment benefits.

Many of the state’s hundreds of thousands of newly jobless have reported problems with filing applications or getting help from hotlines. They’ve had their online applications disappear in front of their eyes when the computer refreshes or they’ve gotten bumped out of the system while filling out the forms, forcing them to start over.

Florida Gov. Ron DeSantis said last week that he’s added 2,000 state workers to try to sort through the growing numbers of unemployment claims. The Department of Economic Opportunity also has increased its computer system’s capacity so that it can handle the approximately 120,000 simultaneous website users it has been seeing recently — about double the peak usage in recent weeks. Officials said the agency received 3.8 million calls last week, 50% more than all of last year.

The maximum compensation unemployed applicants can receive is $275 a week, among the lowest in the nation.

“The system is broken,” said Jeremy Haicken, president of Unite Here Local 737, one of the six unions for Disney World workers that make up the Service Trades Council. “We’re not going to stop until Gov. DeSantis fixes this unemployment system.”

Under the deal Disney World reached with the Service Trades Council last weekend, workers will be able to keep their medical, dental and life insurance benefits for the length of the furlough period, or up to a year. Seniority and wage rates will remain unchanged.

Hew Kowalewski, who works as a food and beverage trainer at Disney World’s Polynesian Village Resort, appreciates that Disney will be paying for his health insurance, which covers the $1,000-a-month cost of his diabetes medicine. But he worries what will happen when he gets his last paycheck for a while in two weeks.

Kowalewski hung a sign in a front window of his home that said, “S.O.S. Fix the Broken Unemployment Website NOW!”

“It’s the uncertainty that’s the worst,” Kowalewski said. “How long can I use my savings to pay my rent and food when I don’t know when I’m going back to work?”