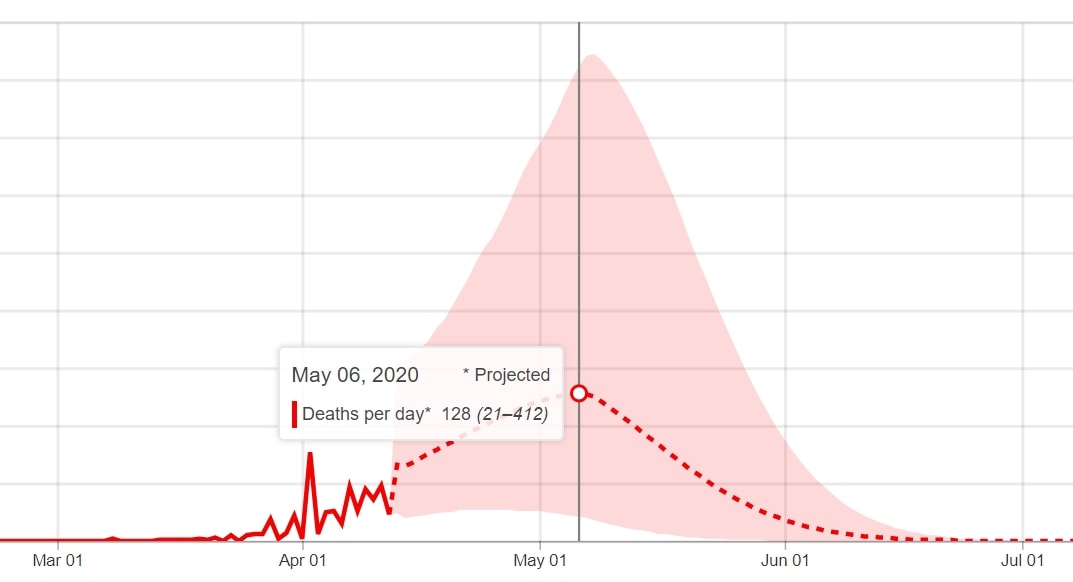 The previous estimated peak was 112 deaths projected for April 26.

The latest projections of an influential University of Washington model suggest slightly more Floridians could die per day at the peak of the coronavirus pandemic, but the date for that peak was pushed back again.

That model, by UW Medicine’s associated Institute for Health Metrics and Evaluation, predicts the state will see 128 deaths per day on May 6 — 16 more daily deaths than the peak foreseen on Saturday. But the 128 fatalities is still roughly half of the 242 daily deadly cases predicted earlier in the week.

However, together with a slight increase in deaths is a more significant projection for fatalities by August 4. The model now guesses the state will see 4,748 Floridians die, up from 4,000 Saturday but down from 6,766 projected earlier that week. By late June, the state would see no more fatal cases by the latest estimate.

The projection is just the most likely scenario as the model currently sees it. Its uncertainty interval, the range in which it expects the peak to span 95% of the time, is 27 daily deaths to 422.

Under the most favorable of those scenarios, 1,250 Floridians would die while under the worst-case scenario, 13,759 would. As of Monday evening, 499 Floridians have passed away.

The model also suggests the state has enough beds and ICU beds, though the margin on ICU beds is slimmer and insufficient under the worst-case scenario. However, hospital beds can be converted into ICU beds to meet a greater need, Division of Emergency Management Director Jared Moskowitz has said.

As for New York, the state with the worst outbreak, the daily death toll has likely already peaked at 800 on Friday. In the grimmest scenario, that peak could still be on the horizon with 2,163 daily fatalities.

And in California, the peak, slated for Sunday, is most likely 52 deaths per day, though 192 is possible.

The recent optimistic projections followed a week of little change in the number of daily confirmed coronavirus cases. For the most part, DOH has recently added between 1,000 to 1,200 to the state’s COVID-19 caseload.

On Monday, Surgeon General Scott Rivkees described that as essentially a plateau. But he said Floridians should consider the daily health precautions the new normal until scientists develop a vaccine, likely six months to a year away.

As of the evening, 21,019 people have tested positive for COVID-19 in Florida.