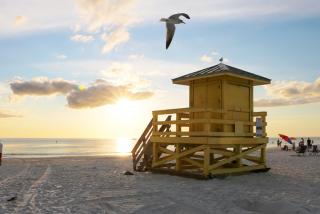 Beach will open for exercise and limited use on April 27.

Siesta Key Beach, one of the top-rated beaches in the country, will be open again on Monday. But don’t expect a drum circle any time soon.

Sarasota County Commissioners voted on Tuesday to open beaches in the county, but only for essential physical activity. That means walks walking, surfing and even fishing will be allowed, but no lounging and sunbathing.

“There are no blankets, coolers and umbrellas for people just laying on the beach,” said Sarasota County Commissioner Al Maio.

The beaches will reopen on Monday, the same day neighboring Charlotte County will allow similar activity on its shores. Charlotte County Commissioner Bill Truex said his board voted Tuesday to reopen, but made the move conditional on Sarasota County taking similar action.

“We want to make certain not to overtax a particular beach in any county,” Truex said.

Leaders have looked to coordinate the reopening of beaches in a regional manner. But Sarasota County Administrator Jonathan Martin said that Manatee County does not appear to be acting immediately on its beaches. The same goes for Lee County to the south of Charlotte.

Notably, Martin also said county officials will not stop local municipalities that want to restrict access further on beaches within those jurisdictions. Venice Mayor Ron Feinsod communicated to the county that he wants beaches within that city to remain closed.

While he supported closing down beaches during spring break, he expects the beaches now to be used largely by residents.

Sheriff’s deputies will monitor activity on the beaches to make sure there aren’t crowds gathering and that social distancing guidelines are still followed.

But Maio said the county must be cautious and phase in activity. He noted County Commissioners will be able to revisit decisions on parking nine days from now, and a week later will meet again.

Sarasota County to date has had 322 individuals test positive for COVID-19, and 31 residents have died.

nextCoronavirus model predicts more deaths, but Florida is still past the peak