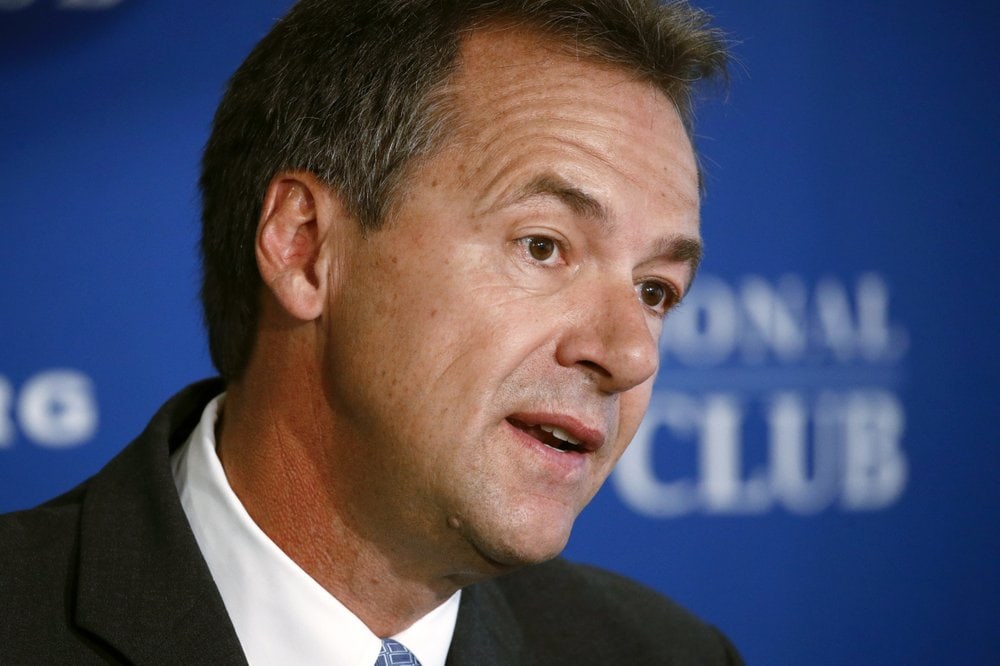 Amid the president's stumbles, Democrats have rising hope they can win the Senate with three pickups.

Steve Bullock was the lame-duck governor of solidly red Montana, fresh off a failed Democratic presidential bid, when he announced he’d challenge Republican Sen. Steve Daines for his seat.

Days after declaring his candidacy last month, Montana’s first coronavirus cases appeared. That shifted the spotlight onto Bullock as he leads the state’s pandemic response, leaving Daines in the unusual position of a sitting senator competing for attention.

“I look forward to when I can spend more time thinking about the campaign and doing that work,” Bullock said last week. Right now, he said, he’s making sure “lives are being saved.”

The coronavirus, the resulting economic shutdown and President Donald Trump’s stumbles addressing the crises have abruptly scrambled this fall’s battle for Senate control. Democrats have rising hopes of gaining the minimum three seats they’ll need to capture a majority, while Republicans who once banked on a robust economy and improving Trump approval ratings are showing signs of nervousness.

Old GOP assumptions about the political climate “are totally upside-down,” said GOP pollster Neil Newhouse. “Republicans have to be prepared for an all-out battle, and it’s going to be a challenge.”

Although much can change by Election Day, favorable signs for Democrats are evident.

Polls this month indicate the potential peril for GOP candidates. Fewer than 1 in 4 surveyed said they highly trust Trump’s characterizations of the outbreak, an Associated Press-NORC Center for Public Affairs Research survey showed. Trump’s favorable rating tumbled to 43% in a mid-April Gallup poll, down from 49% two weeks earlier.

“More and more are signs the voters are looking for change, they’re looking for greater stability,” said J.B. Poersch, who runs the Senate Majority PAC, an outside ally to Democratic leadership.

Illustrating one Republican’s approach to Trump, Collins said his speculation about the virus is “not helpful.” Trump mused the next day about injecting disinfectants as a treatment, which doctors warned could kill.

Asked about Trump, Collins noted she didn’t back him in 2016. “I’ll work with whomever is elected president,” she said during an Instagram live event hosted by Colby College.

Happily for Republicans, their candidates have accumulated more cash than their Democratic challengers in most of the Senate’s closest races. Indications the economy’s revival may drag mean fundraising could be tough all year, helping those already boasting formidable bank accounts.

“All you can do is hold a Zoom meeting your supporters show up at and a few bored reporters,” Steven Law, who runs Republicans’ Senate Leadership Fund, said of challengers.

Republicans control the Senate 53-47 but are defending 23 of the 35 contested seats.

Yet all but two GOP-held seats at stake, Colorado and Maine, are from states Trump won in 2016, mostly easily. Even so, Republican seats in Georgia and Kansas are plausible Democratic targets.

Sen. Doug Jones of solidly Republican Alabama is Democrats’ most endangered incumbent yet has banked a formidable $15 million. He narrowly won a 2017 special election against Republican Roy Moore, who faced accusations of sexually harassing teenagers decades ago when he was a prosecutor, which he denied.

In Arizona, McSally has blamed China for covering up and not containing the disease. Gun control advocate and former astronaut Mark Kelly, her Democratic challenger, has faulted Republicans for trying to repeal former President Barack Obama’s health care law, arguing the virus makes its protections crucial.

One spot by the Democratic-allied Majority Forward denounced Collins for saying Trump initially “did a lot that was right.” A Collins ad called Gideon allies “shameless” for politicizing “the worst health and economic crisis in a century.”

Daines is reaching Montana voters with telephone town halls and Facebook chats. “I’m focused on ensuring the voice of Montana is heard in federal policy,” he said.

While in the spotlight as governor, Bullock’s been pressured by the Trump administration and Daines to ease his statewide stay-at-home order. Bullock let some curbs lapse this week, citing health care and economic realities, not politics.

nextThousands of ventilators idle in Florida