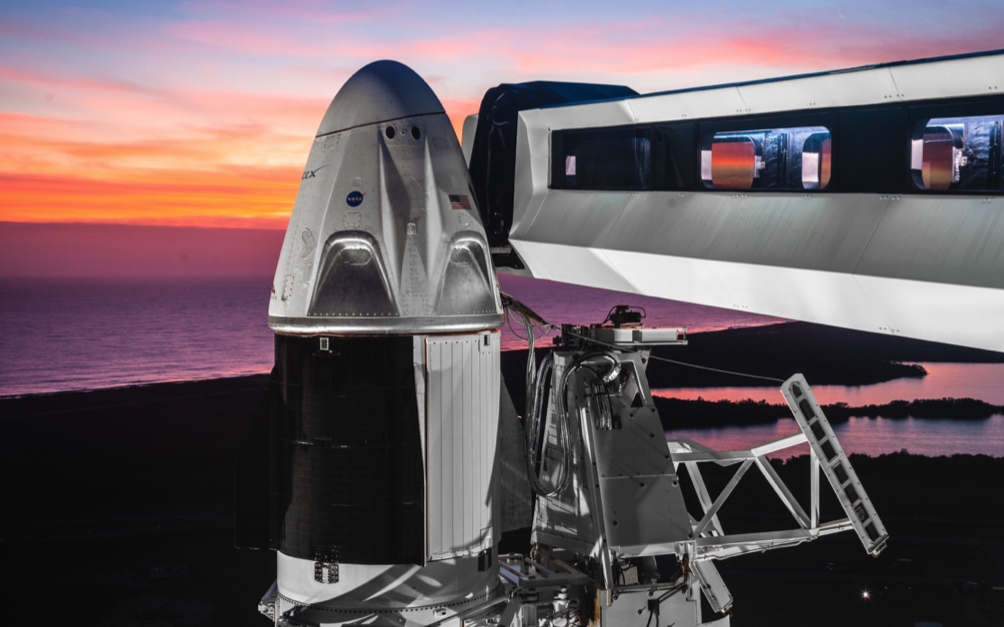 This is a high-priority mission for the United States of America.

The SpaceX rocket launch of American astronauts from Kennedy Space Center is a “go” for later this month — as it partners with NASA to return America and Florida to space.

On Friday SpaceX and NASA officials officials briefed the media on the launch, now pushed back slightly to May 27, from an earlier May 15 target date.  The Demo 2 mission of SpaceX’s Falcon 9 rocket and Crew Dragon capsule is sending two American astronauts, Doug Hurley and Bob Behnken, to the International Space Station.

“We are gonna launch American astronauts on America rockets, from American soil. We’re going to do it here in the midst of the coronavirus pandemic. I’m going to tell you this is a high-priority mission for the United States of America,” said NASA Administrator Jim Bridenstine.

The launch will take place at Kennedy Space Center’s Launch Complex 39A, the first time since July of 2011 that American astronauts have launched from American soil, or on an American rocket.

This time, Nasa will not own the rocket and capsule, but by a private company, marking the opening of a new era in which NASA books rides to space from private companies.

“My heart is sitting right here,” said Gwynne Shotwell, SpaceX president and chief operating officer. “And I think it is going to stay there until we get Bob and Doug safely back from the International Space Station.”

SpaceX and Boeing have been trucking equipment and supplies to the International Space Station for more than five years. This will be SpaceX’s 21st trip to the station, though the first one with people aboard.

The last time NASA sent Americans to space from American soil was on the final mission of the Space Shuttle Atlantis, which launched on July 8, 2011.  That also was launched from Kennedy Space Center’s Launch Complex 39A, and Hurley was the pilot.

Since then, NASA has had to book trips aboard Russia’s Soyuz spacecraft.

“Gwynne and I have been waiting for this for a while,” said Kathy Lueders, program manager, for NASA’s Commercial Crew Program at Kennedy Space Center. “I want to make it clear that this is one of many exciting and hard days we have ahead of us. Gwynne’s team and my team are working very hard getting the vehicles ready, making sure that all the Is are dotted and Ts are crossed in our analysis, test data, assessments, going through all the reviews, and making sure that we are ready for this important mission, to safely fly Bob and Doug up to the International Space Station, serve as a lifeboat, and return them to their families.”

Should the demonstration mission prove successful, SpaceX already is preparing for the next later this year, which would be an official NASA astronaut transportation mission, dubbed Crew 1.

And should SpaceX and Boeing continue success, their goals are to also sell their services to private companies wanting to get into space, eventually to carry private astronauts to privately-developed, owned and operated space stations.

“This really is the next major step in commercializing lower Earth orbit and having a really vital lower Earth orbit economy in which NASA is one of many customers, said Kirk Shireman, NASA’s program manager for the International Space Station Program.

SpaceX is one of two, along with Boeing, with contracts with NASA to take over transportation of NASA’s astronauts into space under NASA’s Commercial Crew Program.

They have been developing their ability to do so for about 10 years. However, there have been numerous setbacks and inconsistent funding, and multiple delays in NASA’s Commercial Crew program, which had initially envisioned putting astronauts into space as early as 2015.