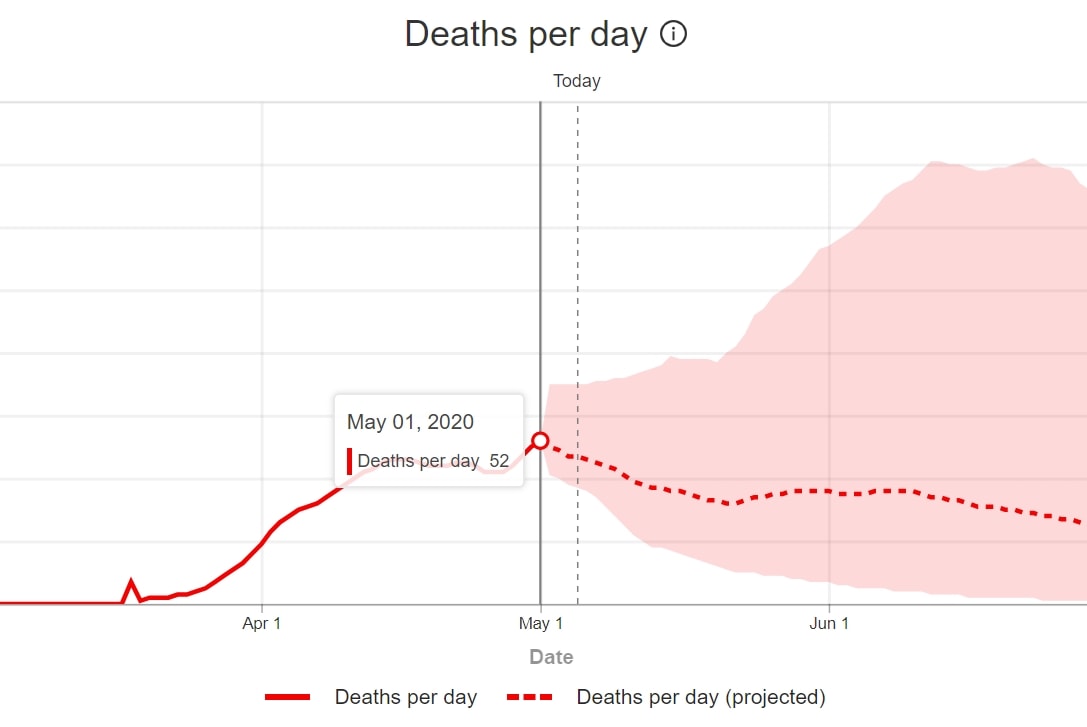 Nearly 4,000 Floridians could die by August in the latest prediction.

After updating the methodology for its COVID-19 pandemic model this week, a group affiliated with the University of Washington predicted nearly 4,000 Floridians could die by August in the average scenario, double its previous prediction.

Between the model‘s previous revision on Wednesday and the latest update on Monday, Florida began Phase One of its reopening, coincidentally announced Wednesday and implemented Monday. The model, produced by The Institute for Health Metrics and Evaluation (IHME), began accounting for reopenings and what services are reopening.

Even as the projected death toll doubled, it still remains below the 6,766 deaths predicted by the end of summer before the state’s stay-at-home order began.

When the state began restricting businesses, schools and other services in mid-March, mobility — as tracked by phone data — took a nose-dive. When the stay-at-home order began, mobility bottomed-out at 56% less than a typical April.

But with the stay-at-home order lifted in most of the state, people will likely be back in public, yet not as much as before. The model estimates mobility will increase from an estimated 44% deficit on the first day of Phase One to a 34% deficit.

The model does not factor in that Miami-Dade, Broward and Palm Beach counties, the state’s COVID-19 hot spot, did not reopen with the rest of the state Monday. Additionally, it assumes existing restrictions will remain in place into August, but that is almost certainly not the case.

Based on IHME’s model, Florida is likely already past the peak of daily deaths. But the state’s outbreak will now likely continue through July when the model previously predicted fatalities would stop by late June.

The peak of daily deaths could have landed on May 1, as test results over the past few days continue to trickle in. But Department of Health data shows that peak on April 17, when 53 Floridians died of COVID-19.

As of the Monday update, the model began plotting mobility, daily confirmed infections, daily estimated infections and daily testing, although some of that data was already tracked behind the scenes. Temperature, population density, testing per capita and changes in mobility are now influencing the model’s predictions.

Several states, including Florida, were tagged with an additional 2,000 average deaths during the revision. Indiana received one of the worst revisions, jumping from 1,041 anticipated deaths to 6,248.

Gov. Ron DeSantis has expressed frustration with reports citing the institute’s projections, particularly earlier projections that were far higher before Florida began seriously locking down and flattening its curve of infection growth.

A consensus of models used by the U.S. Centers for Disease Control and Prevention, which do not include the IHME model, projects Florida’s outbreak will result in 2,000 COVID-19 deaths by May 30. IHME predicts 2,432 deaths by the same date.