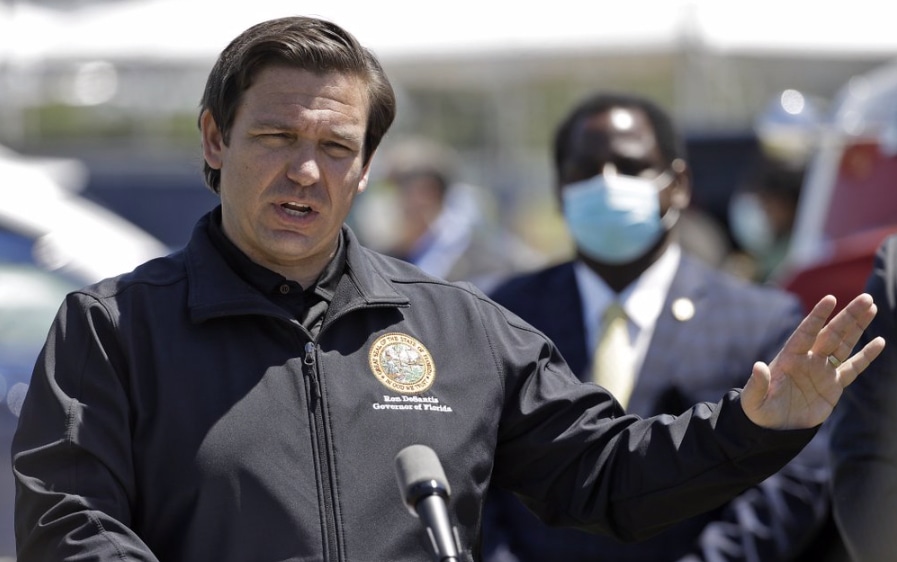 The models have been inaccurate and don't provide nuance, he says.

When asked about the state’s disaster response agency’s use of coronavirus modeling, Gov. Ron DeSantis again Monday launched into an attack on those models and media outlets that report on them.

The Governor, speaking at a Lee County hospital, was asked about one of several models used by the Division of Emergency Management (DEM) and Director Jared Moskowitz.

After three minutes of bashing the models, he circled back to the gist of the original question.

“The models have not been accurate, and the Division of Emergency Management may do it, but I can tell you, I’ve talked with Jared multiple times about we need to go based on facts and based off evidence and not go based off conjecture.”

DEM uses a series of models to anticipate how many supplies the state should have to preempt the pandemic’s impact, similar to how it uses an assortment of models to predict hurricane paths. The division’s spokesman, Jason Mahone, emphasized that the state uses multiple models to plan for its contingencies in a statement to Florida Politics.

“The state uses all available data to respond to COVID-19,” Mahone said. “This includes the number of cases in Florida, the Emergency Department chief complaint and admission data included in daily reports, as well as reports coming in from other states.”

When asked what models the state is looking at, the Governor said he looks at the facts and the data the state pulls in itself. The state must look at hospitalization rates and new infection positivity rates rather than models he has called false.

“I think what I’ve found on these models is that they have assumptions that are totally unreasonable, but then also they have no appreciation for how individual states are dealing with this,” he said.

The model named in the provocative question comes from the Institute for Health and Metrics Evaluation (IHME), made in association with the University of Washington and highlighted by members of the White House Coronavirus Task Force. As of Sunday, the model shows 5,440 people could die in Florida by early August and the estimated peak need for hospital beds at just under 2,000.

But the model doesn’t provide the policy nuances DeSantis said states should consider when planning, including input from hospitals and doctors. It includes that the stay-at-home order was lifted, but not that it remains in place for Miami-Dade and Broward counties, and Palm Beach County before Monday.

“How do you model Florida moving to Phase One with 64 counties and then not with, say, Miami-Dade,” he said. “I have not seen any appreciation for any of that.”

And the Governor railed against the outlets, not by name this time, that reported a prediction that 464,000 people would be hospitalized in Florida by April 24. With only 70,000 license hospital beds statewide, such an influx would require the state to build field hospitals but in an impossible quantity.

“You’re really projecting massive, massive fatalities — 100,000, 200,000 if you really look at that,” he said. “And that was something that was being printed in newspapers.”

In reality, 4,817 Floridians had been hospitalized by that date.

“There would be some models,” DeSantis said, “that would literally come out and they would say, ‘The next day, Florida’s going to have 4,500 people hospitalized.’ And then I would look and see how many people are hospitalized. Oh, well 1,600. I was like, alright, are we going to have 2,900 people all of a sudden?”

Hitting outlets for reporting projections made by health experts that never materialized has become a staple of the Governor’s near-daily press conferences. Defending Jacksonville from national attacks for opening its beaches last month has also been a favorite, not visited in his Lee County talk Monday.

The latest iteration of IHME’s model now predicts the peak of coronavirus deaths in the state is yet to come. In its average scenario, 60 Floridians could die per day by the second week of June, up from the low 50s this week.

The model also comes with a confidence interval. Necessary hospital bed use and deaths may already be on their way down or bed need could still jump to 4,800 and deaths to 152 per day by mid-June.

Previously, the model predicted COVID-19 cases would mostly peter out by that time. But a rework of the model’s methodology and the state entering Phase One last week contributed to a significant bump in the state’s expected death toll.

As of Monday, 40,982 people have tested positive for the disease in Florida. Including non-residents, 7,458 people have been hospitalized in the state and 1,805 have died.