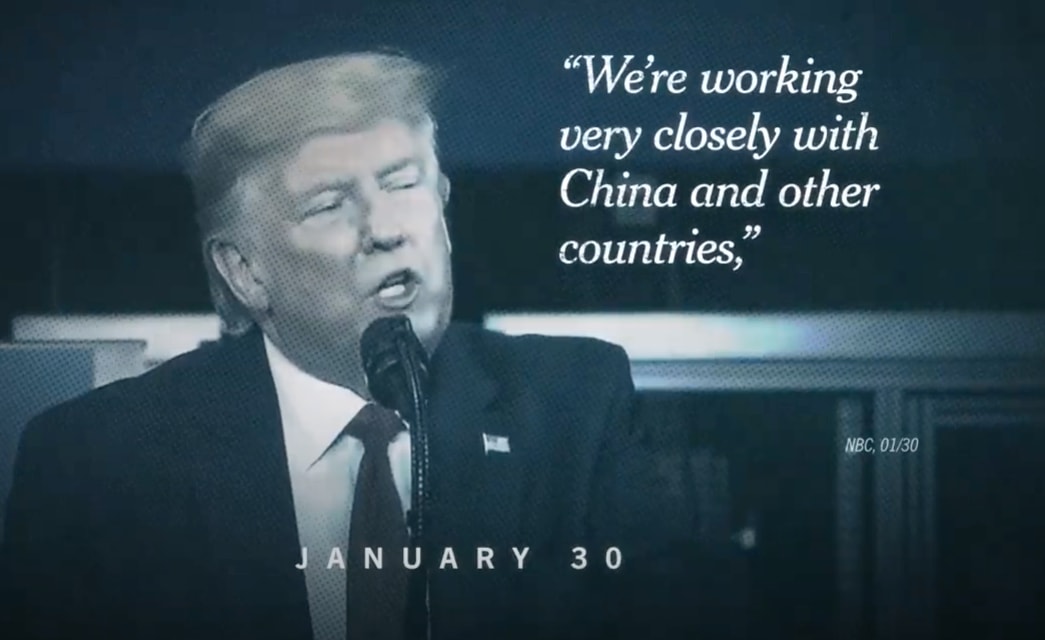 The ad focuses on Trump's early claims that the virus was not a threat.

The ad, “Timeline,” argues the severity of both the public health crisis and the economic crisis are Trump’s fault because of inaction in January and February as he tried to reassure the nation and the stock markets that nothing was wrong.

The ad also spins the current debate over China’s culpability, offering moments in which Trump praised China and supported its statements during the virus’ early days.

“Joe Biden publicly warned Donald Trump that he had to act early to protect us from this unprecedented outbreak, and that we couldn’t trust the Chinese government’s word about containment,” Biden campaign spokesman Andrew Bates said a written statement. “Trump’s own public health and intelligence advisers were telling him the very same things. But he failed us, echoing Chinese Communist Party propaganda and downplaying the threat to preserve short-term stock market gains — and now nearly 80,000 Americans have lost their lives and one in five Americans has filed for unemployment.”

Trump Victory spokesperson Emma Vaughn responded with a statement reading, “President Trump took bold, unprecedented action to stop the spread of coronavirus as soon as the threat was clear, including an ahead-of-the curve travel ban that Joe Biden called xenophobic. While President Trump leads in the White House, Joe Biden offers half-baked political attacks from the safety of his basement. Biden is trying to rewrite history when in reality, his consistent softness on the Chinese Communist Party is a hallmark of his career.”

That theme, of Trump initially supporting China’s statements while Biden urged otherwise, is played out in the first two minutes of the commercial.

The ad begins by citing Washington Post reports that Trump was first warned of the virus in early January. “He ignores it,” a narrator declares, as the commercial cuts to video footage of Trump saying, “we have it totally under control” in January.

The commercial then shows a series of Trump tweets and statements defending China’s statements in January and February.

Then, as the ad reminds, the stock markets begin their late January and early February fall. The ad moves to late February, as the markets continue to crash, showing various administration officials saying the coronavirus outbreak is contained, while the markets plunge again, and Trump continues to reassure in March.

“April turns into May,” the narrator says. “The virus doesn’t disappear, There is no miracle. The cases mount. The death toll grows. More than 33 million Americans lose their jobs due to the pandemic. Unemployment reaches Great Depression-era levels. Donald Trump doesn’t understand.”