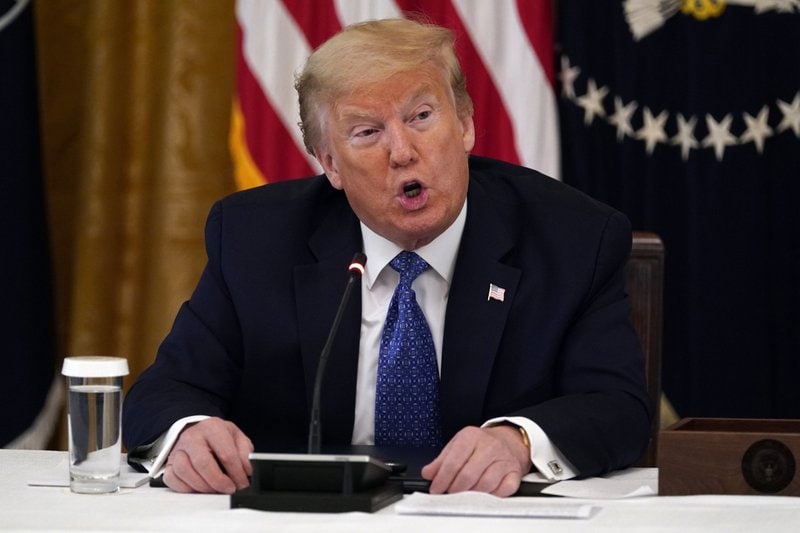 President Donald Trump on Friday called protesters in Minneapolis “thugs” and said that “when the looting starts, the shooting starts” — drawing another warning from Twitter for his rhetoric.

Trump tweeted after protesters outraged by the death of a black man in police custody torched a police station.

It was the kind of personal statement expected from a president in response to the disturbing video of a black man gasping for help as a white policeman pinned him to the street by the neck. But it was a very different tone for Trump, who has often been silent in the face of white-on-black violence and has a long history of defending police.

Trump’s language got more aggressive as violence boiled over in Minneapolis on Thursday night. “These THUGS are dishonoring the memory of George Floyd, and I won’t let that happen,” he tweeted. “Just spoke to Governor Tim Walz and told him that the Military is with him all the way. Any difficulty and we will assume control but, when the looting starts, the shooting starts. Thank you!”

Twitter added a warning to Trump’s tweet about the Minneapolis protests, saying it violated the platform’s rules about “glorifying violence.” It did not remove the tweet, saying it had determined it might be in the public interest to have it remain accessible, something it does only for tweets by elected and government officials. A user looking at Trump’s timeline would have to click to see the original tweet. Earlier this week, Twitter applied fact checks to two of Trump’s tweets about mail-in ballots.

Once more likely to hew to the “blue lives matter” mantra, Trump and his allies have been questioning an officer’s conduct and calling for justice for Floyd. But some activists doubt that Trump has suddenly evolved on the issue of police brutality and instead see election year political calculations.

“This is the first race-tinged case that I’ve ever heard him address” as president, said the Rev. Al Sharpton, a civil rights activist and Trump critic who has known the president for decades. “So therefore he cannot be upset when people feel that it’s empty words because it is so out of character.”

Trump has been silent on a number of high-profile police-involved killings, including that of Stephon Clark, a black man shot by Sacramento, California, police in 2018.

“This is something that is a local matter and that’s something that we feel should be left up to the local authorities,” then-White House press secretary Sarah Sanders said at the time.

Trump has never addressed the 2014 death of Eric Garner, who was placed in a chokehold by police trying to arrest him for selling loose cigarettes. Video of the encounter was viewed millions of times online, and Garner’s dying words, “I can’t breathe,” became a rallying cry for the Black Lives Matter movement. Trump has, however, invoked those words on several occasions to mock political rivals, even bringing his hands to his neck for dramatic effect.

Trump has a long history of injecting himself into racially sensitive cases. In 1989, he took out full-page newspaper ads calling for the death penalty for the Central Park Five, five young men of color who were wrongly convicted of a brutal assault on a jogger. Trump has never apologized, telling reporters last year: “You have people on both sides of that.”

Trump also spent years railing against NFL quarterback Colin Kaepernick for kneeling during the national anthem to protest racial injustice and police brutality. And he has even appeared to advocate for the rougher treatment of people in police custody, speaking dismissively of the police practice of shielding the heads of handcuffed suspects as they are being placed in patrol cars.

But Trump’s tone has changed in recent weeks as he has repeatedly expressed dismay at footage of the killing of Ahmaud Arbery, the 25-year-old black man fatally shot in February in Georgia while jogging.

“You know, my heart goes out to the parents and the family and the friends,” he told reporters this month. “It’s a heartbreaking thing.”

The president has notably left open the possibility of some other explanation, saying: “it could be something that we didn’t see on tape.”

Trump and his allies have been even clearer on the death of Floyd, who can be heard and seen on tape pleading that he couldn’t breathe before he slowly stops talking and moving.

Trump “was very upset when he saw that video,” White House press secretary Kayleigh McEnany said Thursday. “He wants justice to be served.”

Trump’s conservative allies also rallied to the cause.

Fox News Channel host Sean Hannity said he is “a big supporter of law enforcement” but expressed outrage Wednesday, telling his audience: “The lack of training here is breathtaking.”

“We got to get to the very bottom of how this poor individual was treated, and the death of him on the video itself is shocking from what I saw,” Republican House Minority Leader Kevin McCarthy said.

Even conservative radio host Rush Limbaugh, who once called Black Lives Matter a “terrorist group,” said Floyd’s death was totally “unjustified” and he was “so mad.”

The outpouring comes as the Trump campaign has sought to chip into the advantage Democrats have with black voters. The campaign hopes either to win enough black support to keep pivotal states such as Pennsylvania, Michigan and Wisconsin in play or minimize enthusiasm for Democratic rival Joe Biden. There could be a small window after Biden last week told a prominent black radio host that African Americans who back Trump “ain’t black,” a gaffe he later said he regretted.

Trump and his allies have seized on that and other Biden statements, even though Biden, who served as vice president under the nation’s first black president, remains deeply popular among black voters, who helped him secure the Democratic nomination.

Chris White, the longtime director of the Detroit Coalition Against Police Brutality, questioned the sincerity of Republicans’ response to the deaths of Arbery and Floyd. The White House and Department of Justice have long had the power to address these issues.

“Any time we hear politicians speaking about dealing with police brutality in the middle of election year, it’s just meaningless rhetoric that has a hollow promise,” he said.

Sharpton credited both the magnitude of outrage in response to Floyd’s death as well as the upcoming election for the changed approach. But he doubted many black voters will be swayed with an approach they may see as too little, too late.

“It’s like a father that misses a kid’s graduation of high school, graduation of college,” he said. “He can’t be upset when the kid looks at him suspiciously when he’s there when he graduates with his Ph.D.”