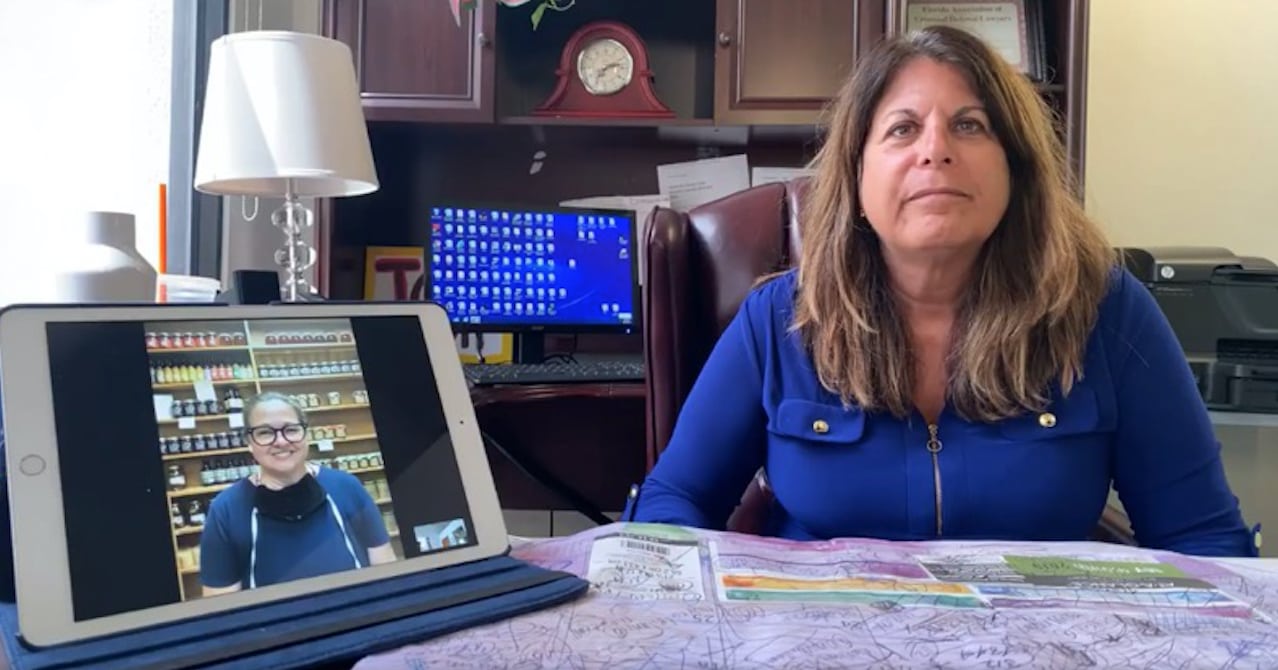 As candidates struggle with how and even whether they should campaign during the coronavirus crisis, more are turning to public service than election messaging, including two Florida House Democratic candidates promoting small businesses.

“As a small business owner myself, I felt there wasn’t enough attention during this pandemic to what it is dong to small business owners, like myself. I’m only as good as the next client who walks in the door. A lot of my district is small business,” said Tracey Kagan, a sole-practitioner attorney from Longwood, who’s making a second run to win the House District 29 seat.

“We decided to focus on a small business every week, online, just to let them voice their concerns and to relate what is happening to them so that other people can share.”

“We own a small business and knew people were hurting. So we go out. The community has jumped on board. They send us pictures. We do videos. We did a frame shop. A restaurant the week before. A cleaners… It’s really struck a nerve,” said Julie Jenkins of Tampa, who’s making a run in House District 60.

“So we came up with, we didn’t reinvent the wheel, we came up with Small Business Saturday, every Saturday. … to try to keep businesses afloat,” Jenkins added.

Everywhere, candidates are looking for new strategies outside the usual campaign playbook. They can’t really go door-to-door. They can’t go to events. They can’t hold rallies or fundraisers. But they need be active in the community.

“What am I campaigning for, but for public service, right? I’m not campaigning so Tracey Kagan becomes popular and wins beauty pageants. I’m campaigning so that I can be a public servant. The issue now is not just my issue, but everybody’s issue: how to feed your family? That’s what it comes down to,” Kagan said. “The campaign is working for me because it’s not focusing on me.”

“As you know, up is down and down is up, and nothing is the same,” Jenkins said. “I ran years ago and it sure as heck is different from what we did before. And with everybody being homebound with COVID, we’re just trying to do some things. I call it guerrilla marketing.”

Kagan’s and Jenkins’ opponents, HD 29 Republican Rep. Scott Plakon and HD 60 Republican Rep. Jackie Toledo, respectively, have their own efforts, turning their campaigns toward public service this spring as traditional campaigning has become if not impossible, then clearly changed.

Kagan and Jenkins both are saying that as they’ve sought to turn the attention of their campaigns away from themselves, to spotlight the small business communities they live and work in, they’re getting the attention anyway.

The point of her discussions, she said, has been to promote small businesses among each other, so that they can share concerns and ideas, and maybe provide a little publicity to individual firms like Wild Hare Kitchen and Garden Emporium and Look Local Magazine.

“I have a lot of small businesses that have reached out to me,” she said. “We’re getting a lot of views and a lot of shares. I’m assuming it’s local. We do get people’s comments, or people call in.”

Jenkins has pursued a broader approach, though she also includes Facebook forums. She focuses on small businesses on Saturdays, going to businesses, making short videos about them, posting about them online, tagging them in social media.

“We got some press out of that. We got some good coverage out of that. I was hearing even from the other side, from Republicans and Democrats saying, ‘Wow, that’s a really good idea,'” Jenkins said. “What’s happening is, the businesses are hashtagging us. JenkinsForFl. They say things online, ‘We appreciate what you are doing. Thank you. Thank you.’ It struck a nerve.”