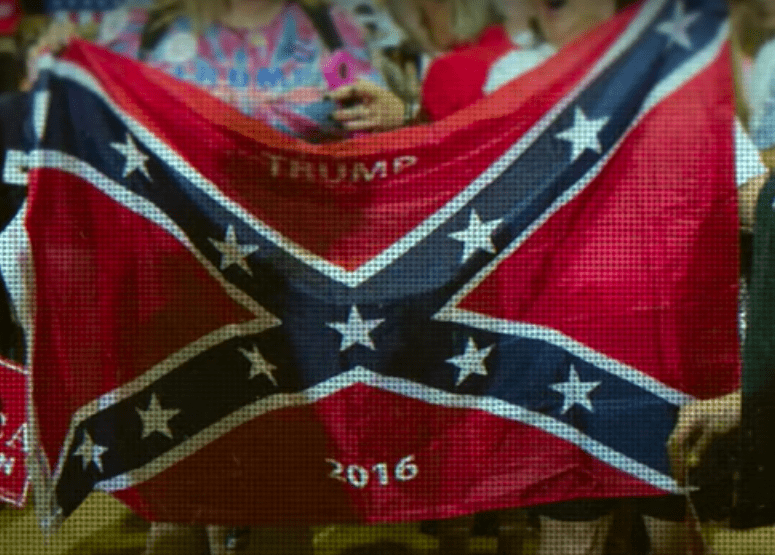 A new ad from The Lincoln Project ties President Donald Trump to the Confederate flag. And the group isn’t afraid to take the message on air in a couple Southern states.

Named for first Republican President Abraham Lincoln, the group makes no qualms decrying the flag as an anti-American symbol.

“The men who followed this flag 150 years ago knew what it meant,” the ad begins.

But Trump has refused to decry the flag. Worse, the ad notes, he’s rushed to the defense of neo-Confederates in the past.

Most famously, he refused to denounce white supremacists participating the demonstrations in Charlottesville protests in 2017, infamously saying there were “very fine people, on both sides.”

Footage of Trump’s gaffe features prominently in the new Lincoln Project ad. So do stills of individuals wearing or flying the flag at Trump rallies. One of those pictures shows an individual flying the stars and bars with Trump’s name printed on the flag itself.

“Why does it keep showing up today at events supporting Donald Trump?” the ad asks about the flag. “And why does he (Trump) call the folks who carry it very fine people?”

Of course, the flag itself has been a notable sight at many a rally in Florida. While there’s not as prominent a sense of nostalgia in the state for the Confederacy as can be found in neighboring Georgia or Alabama, many Florida politicians on both sides of the aisle have historically been reluctant to trash the flag.

The tide has turned to a degree on that. Lawmakers this year considered a resolution condemning white supremacists that passed unanimously in the Senate.

The Legislature in 2018 also voted to replace a statue of Confederate Gen. Edmund Kirby Smith in National Statuary Hall with one of black college founder Mary McLeod Bethune.

Still, museum curators in Lake County offered the statue a new home over the objection of black community leaders. And a fight over a Confederate monument on the state Capitol grounds remains a controversial matter.

The Lincoln Project, in running ads in Florida and North Carolina, is counting on the tide shifting at least somewhat. With past ads, which the group has aired in deep red parts of Florida, organizers have stressed only a portion of disgruntled Republicans in Florida need stay home or vote for Joe Biden to doom Trump’s chances at reelection.

And as it happens, the ad has dropped at a moment of fresh race-centered protests around the country. Black Lives Matter activists have protested in cities nationwide around the death of George Floyd. That has included in Florida.

And once again, parties like Antifa and white nationalists groups have played their own roles as protests turn violent.