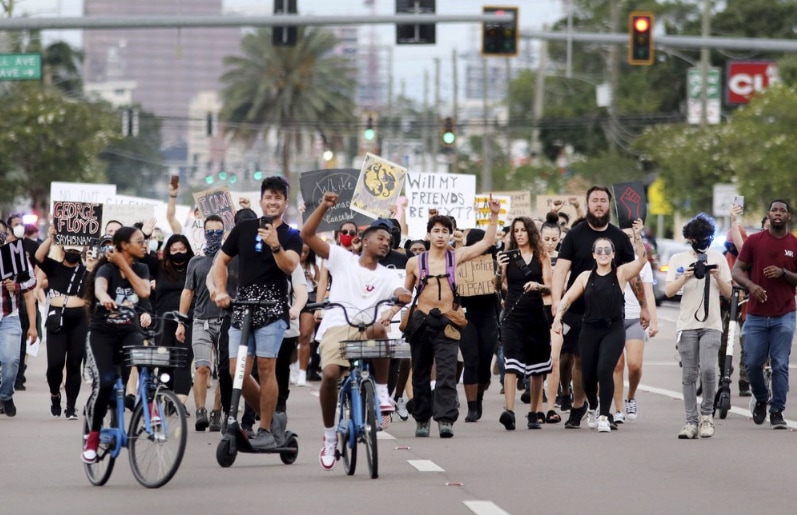 The civil rights organization took issue with use of tear gas and rubber bullets.

The ACLU of Greater Tampa is calling on local officials to formulate plans for peaceful protest response as George Floyd protests continue into the weekend.

“The right of citizens to protest, and the right of journalists to freely report, are fundamental rights under our Constitution, which police officers are sworn to protect,” the group wrote in a letter to the officials.

“We do understand that some individuals have capitalized upon the current national upheaval to engage in criminal acts that are unconnected to protests, but TPD must not allow for citizens’ and journalists’ fundamental rights to be eroded by conflating their Constitutionally protected activities with the actions of these unconnected individuals,” the group continued.

Saturday night saw a day of peaceful demonstrations in the University area and near Busch Gardens that later turned violent.

A Champs Sports and Mobil gas station, as well as a handful of other businesses, were set ablaze in the clashes between police and protesters.

But Sunday’s demonstrations, the ACLU claims, were different.

“Specifically, several hundred citizens attended a peaceful gathering last Sunday, May 31 at Cyrus Greene Park. Following that event, several individuals had gathered near the intersection of Martin Luther King Boulevard and 22nd Street. TPD showed up in full riot gear. By all accounts, TPD ordered those gathered to disperse within three minutes, and protesters were in fact leaving the area and heading toward their cars,” the ACLU wrote.

“After only one minute, police began firing rubber bullets and tear gas, unnecessarily creating a panicked and chaotic atmosphere that quickly infected the gathering, and some individuals present were injured.”

The group also took issue with reports of a Tampa Bay Times journalist being knocked to the ground, detained and zip-tied during a recent protest.

“Though she identified herself as a journalist and displayed her press credentials, an officer reportedly told her he did not care that she was a journalist. Upon removing the zip cuffs from her, an officer said something to the effect of: ‘I hope you’ve learned your lesson,’” the group wrote.

Tampa officials later apologized for the incident. St. Pete officials did the same after another Times reporter was also detained in protests there.

The ACLU is asking for a Professional Standards Bureau review over the Tampa Police Department’s use of tear gas and rubber bullets as well as assurances the agency won’t use those weapons on unarmed protesters going forward.

“Please note that tear gas is banned under the Geneva Convention, yet TPD used a weapon deemed too vicious for enemy soldiers, on peaceful citizens who were protesting the unnecessary use of force by overzealous law enforcement. The irony is not lost on us,” they wrote.

The ACLU described the incidents as an “entirely predictable result of a departmental culture that views its mission as dominating and subduing protesters instead of protecting them.”

“In these times of unrest, it does not ease the situation when police increase aggressiveness and violence instead of responding to protests in a peaceful manner. Such actions serve only to convince the community that protesters’ concerns about the unnecessary use of force by police are well justified, which we suspect was not the message that TPD intended to convey.”

Since weekend clashes, Tampa has seen few problems with peaceful protests turning to chaos. A Thursday evening demonstration on Ashley Blvd. in downtown Tampa saw some 1,000 or more protesters flood the streets.

The group all took a knee in silence, fists quietly in the air, as a sole protester read aloud George Floyd’s final words as he lay prone under the suffocating knee of a Minneapolis Police Officer.

Police in that demonstration did not interfere.