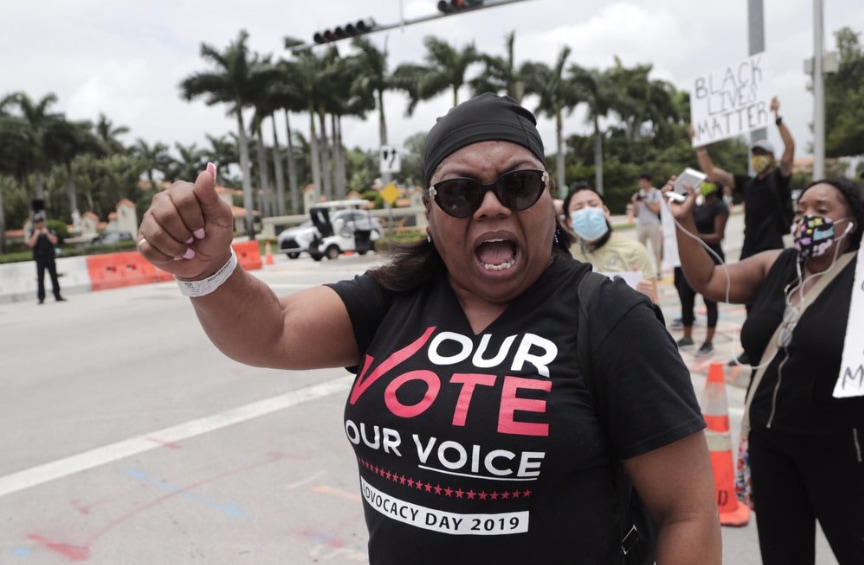 During a break in the rain Saturday, several hundred protesters sat in an intersection in downtown St. Petersburg, Florida and chanted against racism.

“No KKK no racist USA,” the crowd yelled.

It was one of dozens of mobilizations in Florida against police brutality, sparked by the death of George Floyd, who died May 25 at the hands of police in Minneapolis.

The protests took place as much of Florida was drenched by rain bands from Tropical Storm Cristobal in the Gulf of Mexico, and included Orlando protests underway even as a tornado reportedly passed over them in the downtown area and may have touched down in a neighborhood just east of downtown.

Massive protests against police brutality nationwide capped a week that began in chaos but ended with largely peaceful expressions that organizers hope will sustain their movement.

Nationally and in Florida, Saturday’s marches featured few reports of problems in scenes that were more often festive than tense. Authorities were not quick to release crowd size estimates, but it was clear tens of thousands of people — and perhaps hundreds of thousands — turned out nationally.

Collectively, it was perhaps the largest one-day mobilization since Floyd died May 25 and came as many cities lifted curfews imposed following initial spasms of arson, assaults and smash-and-grab raids on businesses. Authorities have softened restrictions as the number of arrests plummeted.

From Miami to Jacksonville to Tallahassee and many cities in between, thousands of people marched and chanted, stopping traffic and demanding change.

“It’s beautiful,” said 28-year-old Nick Williams in St. Petersburg. “It shows the city has come together over all the injustices.”

In Tampa, former Tampa Bay Buccaneers coach Tony Dungy was one of many who marched from a church to a mall that was hit with violence last weekend. In a Miami suburb, rapper Rick Ross attended a protest.

About 100 protesters gathered Saturday at President Donald Trump’s golf resort in Doral, Florida, just outside Miami. The protest was organized by Latinos for Black Lives Matter. Many carried signs saying such things as “Vote Him Out” and “Don’t Be A Bunker Boy,” the latter a reference to reports that Trump went into the White House bunker when protests in Washington got more violent. Trump insists he only went there briefly for an inspection. In Doral, about a dozen police officers were on hand for the protest but did not take any actions.

In Orlando, thousands of people marched around Lake Eola, the city’s downtown park. Around 7:30 p.m. in Orlando, a possible tornado was spotted close to downtown, where a group of protesters gathered. There was no word of injuries.

The Orlando Sentinel reported that Sheriff John Mina told demonstrators his agency added a policy this week that requires deputies to intervene when they see misconduct by their colleagues. Many who heard the message said it’s a start but not enough.

In Jacksonville, protesters began the demonstration by calling out the names of residents fatally shot by Sheriff’s Office personnel. So far, 10 suspects have been shot by Jacksonville police this year with six dead, according to the Times-Union.

About 1,000 gathered in Tallahassee. Like the protesters elsewhere, people demanded more citizen oversight of law enforcement, using local and state money for health care and social services instead of policing, and to enact some sort of citizen accountability board to help set police policy.

Terron Gland, the organizer of St. Pete Peace Protest, wore a black shirt with some of Floyd’s last words: “I can’t breathe.”

Police weren’t visible at the protest, but Gland said that earlier in the day, some top officers from the city’s department wanted to march “in solidarity.” At one point, the city’s police chief asked the news media to leave.

The Tampa Bay Times reported that Chief Anthony Holloway said the media was hampering efforts to relate with protesters, but that reporters could stay.

“(The protesters) felt we were using this as a media opportunity,” Holloway told a Times reporter. “What we’re trying to create is unity.”

That wasn’t possible with the media there, Holloway said.

When the reporters mentioned the media had a 1st Amendment right to be there, Holloway said “You have every right to be here.”

Eventually the police left and didn’t march with the group.

Demonstrations also reached four other continents, ending in clashes in London and Marseille, France. In the U.S., Seattle police used flash bang devices and pepper spray to disperse protesters hurling rocks, bottles and what authorities said were “improvised explosives” that had injured officers, just a day after city leaders temporarily banned one kind of tear gas.

Around midnight in Portland, a firework was thrown over the fence at the Justice Center, injuring a Multnomah County deputy, Portland police Lt. Tina Jones said.

The largest U.S. demonstration appeared to be in Washington, where protesters flooded streets closed to traffic. On a hot, humid day, they gathered at the Capitol, on the National Mall and in neighborhoods. Some turned intersections into dance floors. Tents offered snacks and water.

At the White House, which was fortified with new fencing and extra security measures, chants and cheers were heard in waves. Trump, who has urged authorities to crack down on unrest, downplayed the demonstration, tweeting: “Much smaller crowd in D.C. than anticipated.”