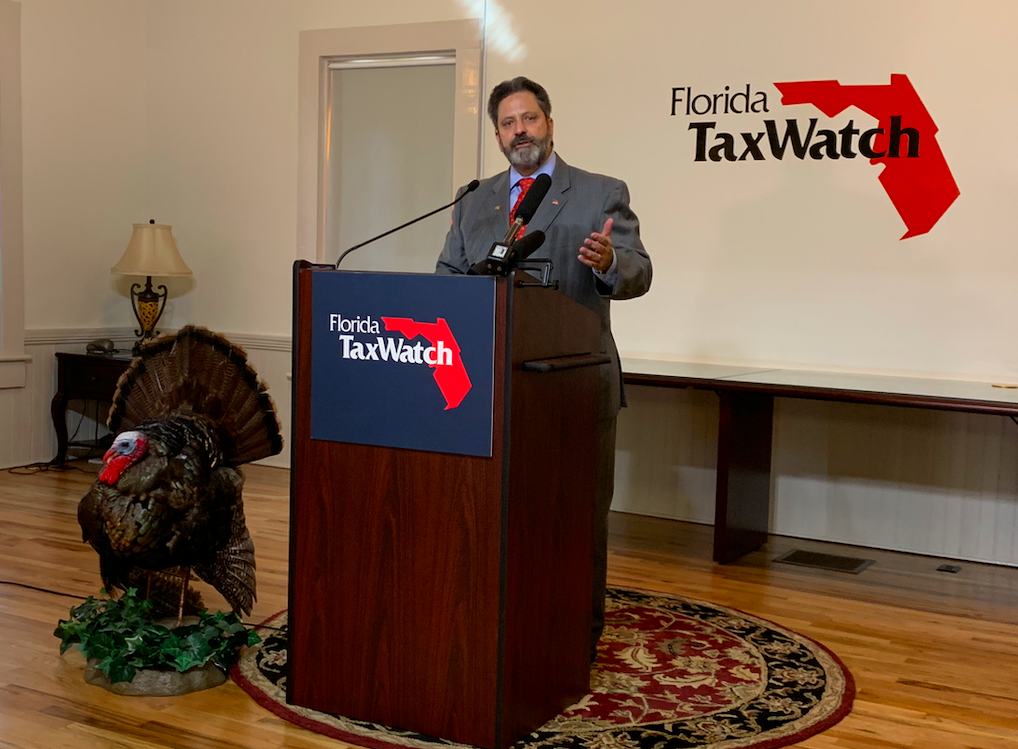 A Florida TaxWatch annual report released Thursday spotlights additions to the Legislature’s $93.2 billion budget they don’t think were fully scrutinized by lawmakers during this year’s Legislative Session. Those projects make up just a portion of the record 829 member projects comprising more than $500,000 of the budget.

The 2020 Budget Turkey Watch Report helps set the scene for Gov. Ron DeSantis when he takes his veto pen to the 2020-2021 spending plan this month. The coming fiscal year begins July 1, before the full picture of the COVID-19 pandemic’s economic effect comes into frame, but estimates show he may need to shave between $500 million and $1 billion from the budget.

In light the virus, which has so far brought increased costs and revenue shortfalls, the report also recommends the Governor veto each member project, even outside of the turkeys, unless it is vital to Floridians. It’s not the first time the watchdogs have made that suggestion, but the pandemic makes the argument more compelling for 2020.

“Reigning in this spending is a critical issue every year and now, as Florida faces an uncertain economic landscape due to the impacts of COVID-19, the need for strict scrutiny by Governor DeSantis is even more important,” said the organization’s vice president of research, Kurt Wenner.

This year, TaxWatch recommended giving leeway to health care appropriations and others that would help the state’s pandemic response. Only two health and human services appropriations, both added during budget conference, made the turkey list.

“The budget review identified appropriations that circumvent transparency and accountability standards in public budgeting,” according to the report.

Supplemental “sprinkle lists” are last-minute additions in the budget conference process that aren’t discussed in public ahead of time. The 2020 sprinkle lists contained 170 Senate items worth $129.5 million and 134 House items worth $137.4 million.

“This means $267 million in hard-earned taxpayer dollars were spent as almost an afterthought, after all the various budget areas had been ‘closed-out,'” said TaxWatch President and CEO Dominic Calabro.

Recent self-imposed rules have helped cut down on the amount of turkeys each year, but they haven’t stunted the growing number of member projects.

“It seems like a less than judicious and prudent sense of the taxpayer’s hard-earned money,” Calabro told reporters at a Thursday press conference. “Again, it’s not theirs to distribute. It’s there for core functions of the (state government).”

The biggest turkey, a repeat offender, is a $10 million project in Manatee County for the 44th Avenue East Extension. The second-largest ticket item is $5 million for the State College of Florida, Manatee-Sarasota’s Parrish Center Phase 1. Both projects fall within outgoing Senate President Bill Galvano‘s district.

Other highlights didn’t meet the criteria for the Budget Turkey label, but TaxWatch said they require extra scrutiny during the pandemic because those sections have a history of numerous member projects. In the case of water projects, the Governor recommended a $150 million matching grant for wastewater and stormwater improvements.

“The Legislature funded the program at $25 million and earmarked a staggering 169 local projects worth $76.6 million,” according to the report.

TaxWatch, founded in 1979, released its first Budget Turkey report in 1983.

“We will never stop fighting for the taxpayers of Florida and look forward to working with Governor DeSantis and our state leaders to implement these measures, increase accountability for every tax dollar spent, and ensure the greatest possible return on investment for Florida families,” Calabro said.