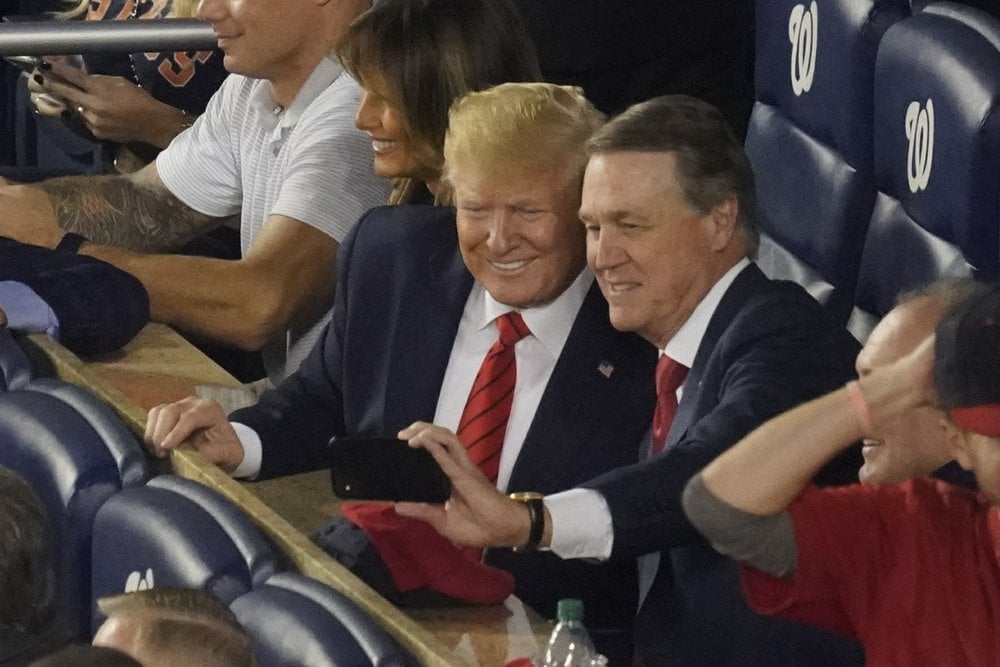 President Donald Trump is hitting the road again. And while a campaign event with a president who draws TV cameras and raucous crowds can be gold for down-ballot candidates, these days its value can be debatable.

Yet a spokesperson said Sen. Susan Collins, a Maine Republican, in the reelection fight of her life, “was at work in Washington” recently as Trump visited her state to open a marine conservation area to commercial fishing. The Senate wasn’t in session that day.

And while GOP Senate candidate John James appeared with Trump in May in Michigan, where polls have trended against the president, James demurred when asked about his 2017 comment that he backs Trump “2,000%.” James said he supports Trump, adding, “I’m looking forward to running my own race, being my own man.”

With Trump coming to Jacksonville to accept the Republican nomination, the question of how close to align with the President will be presented to ever Republican candidate facing a tough contest in Florida.

Trump is the GOP’s unrivaled beast, commanding the unswerving fealty of nearly all its voters. While some Republican candidates yanked their support late in his 2016 campaign after a decade-old video showed him boasting about groping women, he’s since proved that crossing him can be politically fatal.

Yet Trump’s divisive law-and-order response to protests against police killings of African Americans, the untamed coronavirus pandemic and the worst economy in decades have wounded him. His job approval rating dipped to a dangerously low 39% in the latest Gallup poll.

For most, there’s little question that homage to Trump is smartest. Republican Sens. John Cornyn, of Texas, and Joni Ernst, of Iowa, seeking reelection in states Trump will likely carry, have no incentive to rebel.

Sen. David Perdue, of Georgia, is also not straying. “Bring it on,” Perdue spokesperson Casey Black said of any efforts to attack his closeness with Trump.

Distancing from Trump would be “a stupid strategy,” said GOP pollster Neil Newhouse. “If the base sees you’re turning your back on the president, they will cut you off.”

Others Republicans face tougher choices. Tillis, Collins, and Sens. Cory Gardner in Colorado and Martha McSally in Arizona are from states Trump could well lose.

Republican candidates are “hostages,” said Trump critic Tim Miller, an aide to past GOP presidential contenders including former Florida Gov. Jeb Bush. But he said Trump’s recent problems, like retweeting a false conspiracy theory about an elderly Buffalo, New York, protester shoved to the ground by police, offer an opening.

“I’m not asking them to become Twitter trolls,” Miller said. “But I don’t see why they don’t take opportunities to put a little distance between themselves and the president.”

Trump has pushed his Capitol Hill allies to keep rank-and-file Republicans in line and vowed to retaliate against defectors, said three White House and campaign officials, who spoke on condition of anonymity because they weren’t authorized to publicly discuss private conversations.

White House aides bridled when Sen. Lindsey Graham, a South Carolina Republican and Trump ally, tweeted support for Gen. Mark Milley. The chairman of the Joint Chiefs of Staff had publicly defied Trump, saying it had been a “mistake” to participate as the president was photographed holding a Bible outside a church after peaceful demonstrators were forcibly cleared away.

After GOP Sens. Mitt Romney of Utah and Lisa Murkowski of Alaska criticized Trump’s tweet about the manhandled Buffalo demonstrator, he unleashed his wrath at them on Twitter. Neither is running for reelection this year.

Colorado’s Gardner and Sen. Kelly Loeffler of Georgia, both in tough races, were among Republicans who didn’t answer reporters’ questions about Trump’s tweet.

“Anyone who wants to win in November should be running with the president,” said Trump campaign spokesperson Erin Perrine.

The White House will watch whether candidates attend and look for other signs of discontent, such as coded distancing in ads saying they’ll stand up to both parties.

No one expects Republicans to break drastically with Trump because of the price they’d pay with the party faithful. But some may feel freer to strike contrasts with him once they clear primaries, which Trump voters dominate. More candidates could stray if polling shows his prospects are bleak as Election Day nears.

With swelling public sympathy for the Black Lives Matter movement, some Republicans have opposed Trump’s refusal to remove Confederate leaders’ names from military bases. And some are preparing legislation changing policing practices, despite uncertainty over his support, .

In the House, Democrats hope to use allegiance to Trump that GOP candidates touted in primaries against them in general elections. That’s likely in suburban districts in states like California, Pennsylvania and Texas, in which voters tend to be more moderate.

Underscoring how candidates tailor their messaging, Tillis ran ads before his North Carolina primary emphasized his endorsement by Trump. Now, his most recent spot emphasizes the battered economy as he tells the camera, “My job is fighting for your job.”

Arizona’s McSally has appeared with Trump often and shown no signs of distancing from him. Instead, she’s focused on accusing her Democratic challenger Mark Kelly, the former astronaut, of being soft on China, whom she blames for the pandemic.

He’s caused “heartburn” for Republicans, “but that doesn’t change his political control over the party,” said Scott Jennings, a GOP consultant.

Countered former Virginia Rep. Tom Davis, another Republican tactician, “Some of these senators have to be more than Trump’s twin brothers to win.”