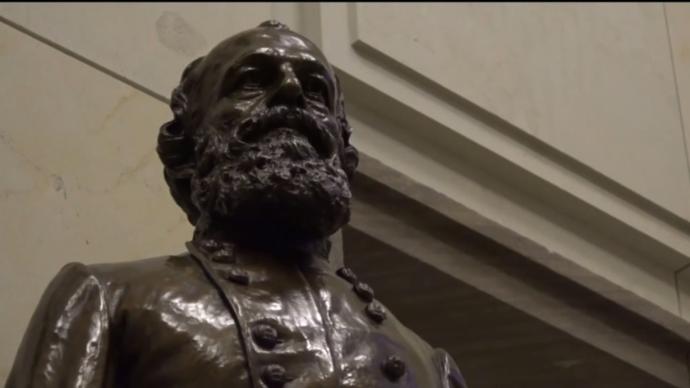 The Commission on Tuesday said they no longer wanted a statue of Confederate Gen. Edmund Kirby Smith located at the Lake County Historical Museum.

“The General Smith statue is not currently located in the Lake County, nor has it ever been located in Lake County,” Campione told Florida Politics. “The statue is owned by the State of Florida. A state committee selected our historical society’s small museum in the Lake County Historic Courthouse in Tavares to display this statue in its war gallery upon its removal from the U.S. Capitol Building. Unfortunately, the process did not include consideration of other museums that would have had a more direct connection to Edmund Kirby Smith, nor did it take into account the tragic history of the Lake County Historic Courthouse.”

Campione said placing the statue in the same courthouse where the Groveland Four were held and mistreated sent a terrible message. Those were four black men accused of raping a white woman in 1949. Two of them were killed, and the other two were convicted and imprisoned on what researchers now widely consider false evidence.

“The Lake County Historic Courthouse has a difficult history of its own and the use of our historic building as the permanent home for the Smith statue has created division in our community for the last few years,” Campione said.

Lake County’s rejection the statue reverses a stance taken last year when the Commission voted 3-2 to endorse the display of the statue, with the request the museum provide context about the views of the Confederacy. At that point, Campione sided with displaying the statue.

She has since changed her mind, notably as sentiment shifts about the Black Lives Matter movement in the wake of the death of Minnesota man George Floyd at the hands of a white police officer.

But Campione acknowledged recent events aren’t what spurred the first criticisms of the statue.

“There is a consensus in our community that a state-owned museum in Tallahassee or a place such as General Smith’s historic home in St. Augustine would be a more fitting permanent home for this statue,” she said.

“This issue had been creating strife in our community and was a distraction to the many positive things happening here in Lake County and Tavares. I want to be clear that this is a matter we have been working on in our county for a couple years, and we were not making progress on bringing everyone together and thus it was a continuing source of contention, which is why I wanted to bring this back for consideration right now.”

The decision drew criticism, including from Rep. Anthony Sabatini, a Howey-in-the-Hills Republican who once called for making a Lake County city a home for discarded Confederate monuments.

“The county commission dictating to an independent history museum what they can and can not display is government censorship plain and simple,” Sabatini said. “I’m opposed to that.”

But Sabatini expressed hope the Smith statue would find a more popular venue.

“The opportunity for it to be displayed at a larger museum is good,” he said.

The Smith statue stood in the National Statuary Hall representing Florida since 1922. But the Florida Legislature in 2018 requested the statue be removed and replaced with a statue of civil-rights leader and educator Mary McLeod Bethune.

The ultimate decision on what to do with the statue now falls with Gov. Ron DeSantis, who notably sent the formal request to replace the statue in Washington, D.C. and voted to pardon the Groveland Four as one of his first acts as Governor.