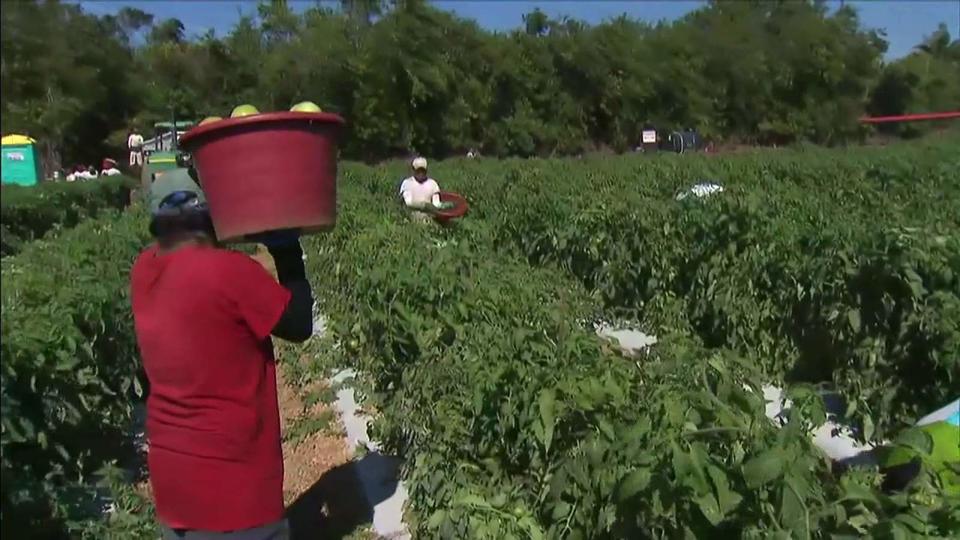 “It is too little too late."

Farmworkers are pushing back after Gov. Ron DeSantis said clusters of “overwhelmingly Hispanic” day laborers and agriculture workers are the source for Florida’s recent surge in coronavirus cases.

The Republican Governor told reporters on Tuesday that migrant workers and Hispanic construction workers have been testing positive for COVID-19, in part, because of cramped living and working conditions.

“Some of these guys go to work in a school bus, and they are all just packed there like sardines, going across Palm Beach County or some of these other places, and there’s all these opportunities to have transmission,” DeSantis said during a press conference in Tallahassee.

DeSantis pointed to cases in migrant camps, a watermelon farm and Immokalee, a major hub for tomato production, to explain the uptick.

The Collier County community, with roughly 24,000 residents, has logged nearly 1,200 cases as of Wednesday, according to the Florida Department of Health.

But members of the tightly knit agricultural enclave say it isn’t the farmworkers’ fault that they are getting sick.

They maintain the federal government has deemed them “essential workers” and the state has been slow to provide the community with the resources farmworker advocates have requested to slow the spread of the highly contagious virus.

Antonio Tovar, executive director of the Farmworker Association of Florida, accused DeSantis of ignoring pleas from a coalition of 50 groups that asked the governor for help in late April.

“We sent this letter to the governor more than two months ago and now he is realizing that foreign workers are more suitable to get infected. That is very shameful because he was advised, he was told when we sent the letter,” Tovar told The News Service of Florida on Wednesday.

Agriculture Commissioner Nikki Fried also highlighted the farmworkers’ plight in a 10-page report submitted to a task force set up by the governor to make recommendations about reopening the state following widespread shutdowns in response to the novel coronavirus.

Fried asked the task force to provide better health care services to farmworkers to prevent the spread of COVID-19, noting that less than half of farmworkers have health insurance. She also called on the state to provide more face coverings for workers and less crowded housing options.

DeSantis’ spokeswoman Helen Aguirre Ferre said the governor long ago targeted the agriculture industry as potentially high risk for the spread of COVID-19.

“For months, Governor DeSantis has been speaking about the importance of proactively testing in areas of high risk, such as agriculture areas where migrant/farm workers tend to live and travel in confined spaces that are conducive to the spread of this disease,” she said in an email on Wednesday.

The Department of Health has worked to “strengthen and foster relationships” with farming communities and migrant camps by distributing face masks and COVID-19 “testing opportunities,” agency spokesman Alberto Moscoso told the News Service on Wednesday.

But Tovar said some of the resources came in May, after the virus had already infiltrated the Southwest Florida farming community.

“It is too little too late,” he said. “It was about two weeks ago when the department (DOH) sent an email to a lot of organizations saying, ‘Hey! We received 2 million face masks. If you want we can give you face masks.’ ”

Further complicating the situation, many farmworkers who work in Florida have struggled to learn about COVID-19 because of a language barrier.

“There’s a lot of information in English, but what about Spanish? There is not. So, that is why we decided to do it ourselves,” Tovar said in a telephone interview.

Many farmworkers rely on YouTube and Spanish-language radio for news updates, he said. To reach the community, Tovar recorded dozens of educational videos in Spanish and posted them on Youtube. He spoke about the benefits of using face masks, what to do if people show symptoms of a respiratory illness, and measures to take to slow the spread of the virus.

The DeSantis administration also has tried to reach out to Spanish-speaking Floridians about the pandemic.

For example, Lt. Gov. Jeanette Núñez has made regular appearances on Spanish-language radio shows, according to her public schedules.

And Moscoso said the health department has used radio advertisements, social media, flyers and billboards to spread the message about COVID-19 in multiple languages.

Silvia Perez, who works for the Coalition of Immokalee Workers, said she has spent months knocking on doors to distribute pamphlets and educate people about the virus.

Perez said she visits neighborhoods where farmworkers live and uses a loudspeaker to announce when coronavirus testing is available in the area.

Perez said DeSantis’ comments on Tuesday were hurtful to Immokalee workers, who are reeling from the deaths of some of their colleagues and the spread of the virus throughout the farming community.

“Our community is very small so when a worker loses their life, the community notices and comes together to raise money to help send the worker back to their home country,” she said. “When you hear those comments, it’s like … Wow, why does he not value us?”

Republished with the permission of the News Service of Florida.

previousSunburn — The morning read of what’s hot in Florida politics — 6.18.20