The Levine Cava team is pointing the finger at two of her opponents.

The Daniella Levine Cava campaign is pushing back after a negative mailer attacked Levine Cava as “not progressive.”

Levine Cava is one of seven candidates competing in the Miami-Dade County mayoral contest. A group called “True Progressives LLC” was behind the attack piece.

“Housing is more than just having a roof over our heads,” the mailer reads. “Yet, Commissioner Daniella Levine Cava cut critical funding to help with affordable housing [and] rental assistance.”

The flip side of the mailer continues its jabs at Daniella Levine Cava, who currently represents District 8 on the Miami-Dade County Commission.

“Daniella Levine Cava has turned her back on us!” the mailer exclaims.

“She is an out of touch elitist who has gotten rich while serving on the County Commission. Levine Cava’s net worth has skyrocketed, nearly doubling to $8.5 million. She even supported raising her own pay to $100,000. While we lose vital services and get taxed, Levine Cava gets rich!”

Levine Cava entered her Miami-Dade Commission race with substantial wealth while running the nonprofit organization Catalyst Miami. The proposed pay raise for commissioners would bring their salaries in line with commissioners from Broward and Palm Beach counties.

The Levine Cava team pointed fingers at two of her opponents in the mayoral contest over the mailer’s release.

“This past weekend a special-interest dark money PAC launched a series of false mailers against Daniella Levine Cava,” said Scott Arceneaux, a senior advisor to the Levine Cava campaign.

“The PAC is being fueled by the same special interests behind Steve Bovo and Alex Penelas‘ campaigns. It’s clear their work is to undermine Democratic voters with the so-called True Progressives LLC and spread lies and misinformation about Daniella’s proven record of leadership in the community.”

Twenty-Two Metrics has also received $45,000 from an organization called Floridians for Economic Advancement. That group has also funneled $1,000 to the Bovo campaign.

Levine Cava’s team is using that money chain to assert her opponents bear some responsibility for the mailers.

“Daniella’s experience and record is widely regarded and lauded; the same cannot be said of Mr. Penelas’ turbulent record as Mayor and Mr. Bovo’s record against residents,” Arceneaux added.

The Penelas campaign, however, denied any connection to the mailer’s release.

“Commissioner Levine Cava knows that the Penelas campaign and Bold Vision Committee have nothing to do with the mailers that were distributed,” a campaign spokesperson said.

“This is an effort to shamelessly portray herself as a victim and raise money for her campaign. The ultimate hypocrisy is that she attempts to defend herself against claims she says are false by trying to discredit Alex Penelas and his record of accomplishment, which will always stand head and shoulders above hers. As someone who wants to be Mayor, Commissioner Levine Cava should hold herself to higher standard.”

Florida Politics has also reached out to the Bovo campaign but has not received a reply. 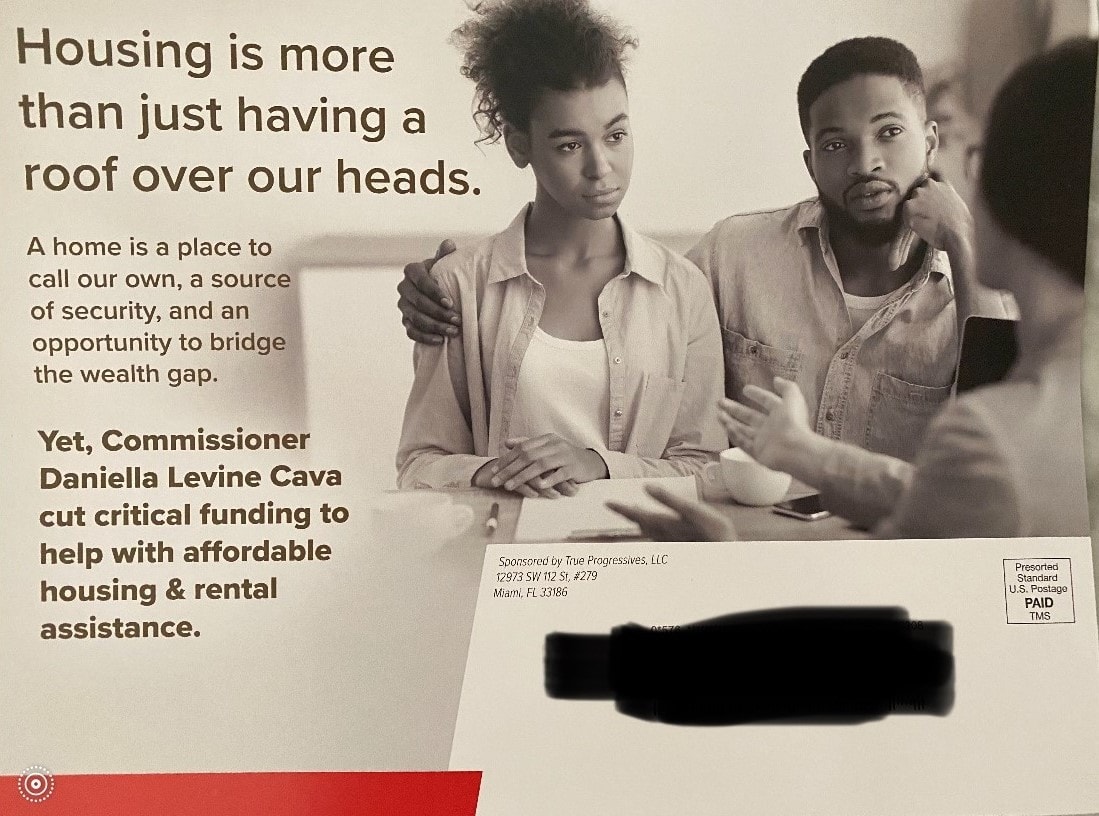 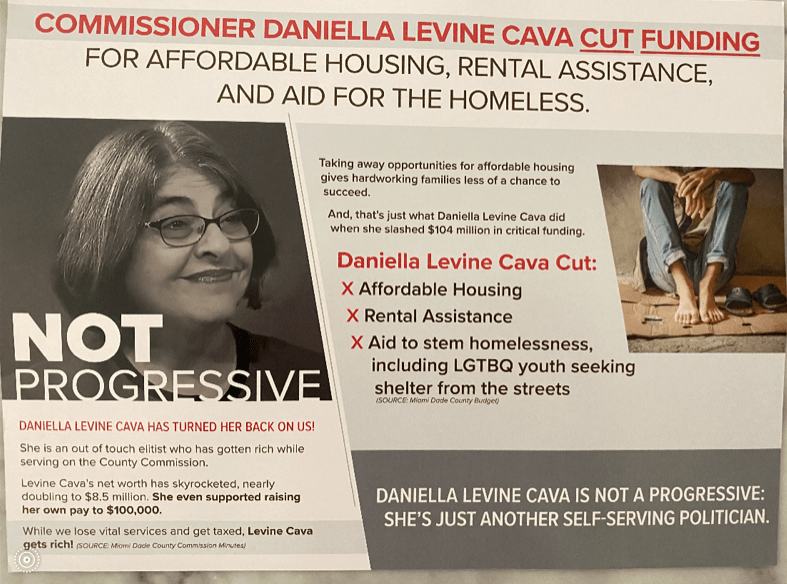