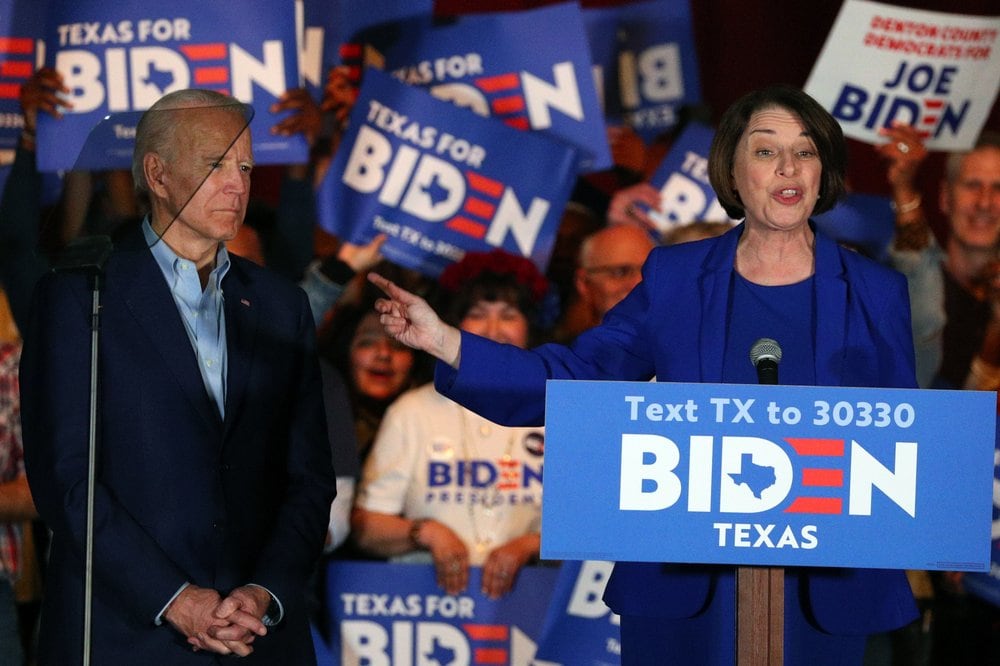 Minnesota Senator's prospects had declined after death of George Floyd.

Amy Klobuchar says she is dropping out of the running to be vice president and urging Democrat Joe Biden to select a woman of color instead.

The white Minnesota senator, who had seen her prospects fall as racial tensions swept the nation, said Thursday that she called the presumptive presidential nominee Wednesday night and made the suggestion. Biden had already committed to choosing a woman as his running mate.

“I think this is a moment to put a woman of color on that ticket,” Klobuchar said on MSNBC. “If you want to heal this nation right now — my party, yes, but our nation — this is sure a hell of a way to do it.”

Biden praised Klobuchar in a tweet Thursday, citing her “grit and determination” and saying, “With your help, we’re going to beat Donald Trump.”

Klobuchar’s chances at getting the VP nod diminished after the killing of George Floyd by a white police officer in Minneapolis. Klobuchar was a prosecutor years ago in the county that includes Minneapolis, and during that period, more than two dozen people — mostly minorities — died during encounters with police.

Floyd’s death last month set off days of protests across the country and criticism that as the county’s top prosecutor, Klobuchar didn’t charge any of the officers involved in citizen deaths. Officer Derek Chauvin, who was charged with Floyd’s murder, had been involved in one of those cases, the fatal 2006 shooting of a man accused of stabbing people and aiming a shotgun at police.

Klobuchar, 60, was among a large field of Democrats who had sought the 2020 presidential nomination, running as a pragmatic Midwesterner who has passed over 100 bills. She dropped out and threw her support behind Biden before the crucial March 3 “Super Tuesday” contests after struggling to win support from black voters, who are crucial to Democratic victories. Her best finish of the primary was in overwhelmingly white New Hampshire, where she came in third.

The third-term senator had to cancel one of the final rallies of her campaign after Black Lives Matter and other activists took the stage in Minnesota to protest her handling of a murder case when she was prosecutor that sent a black teen to prison for life.

Rep. James Clyburn of South Carolina, a close Biden ally and Congress’ highest-ranking black lawmaker, said in the days after Floyd’s death that he believed it made Klobuchar a less likely pick for vice president, though he said she is “absolutely” qualified for the job.

“This is very tough timing for her,” Clyburn said.

Even before Floyd’s death, activists were pushing Biden to consider a woman of color, saying it would help build a multiracial coalition behind the Democratic ticket and motivate people — particularly younger voters — who may be underwhelmed by the 77-year-old former vice president’s bid. The founder of She the People, a network of women of color, called news that Biden had asked Klobuchar to undergo formal vetting “a dangerous and reckless choice.”

“To choose Klobuchar as vice president risks losing the very base the Democrats need to win, most centrally women of color, and could be a fatal blow to the Democrats’ chance to win the White House,” Aimee Allison said in May.

Others wanted Biden to choose a more progressive candidate, who could bring in support from voters who backed Bernie Sanders and Elizabeth Warren in the primary. Like Biden, Klobuchar disagreed with Sanders and Warren during the campaign on major issues such as health care, calling “Medicare for All” unachievable and pushing instead for changes to the Affordable Care Act.

Democrats with knowledge of the process told The Associated Press last week that Biden’s search committee had narrowed the choices to as few as six serious contenders after initial interviews. Among the group still in contention: Warren, California Sen. Kamala Harris and Susan Rice, who served as President Barack Obama’s national security adviser. Warren is white; both Harris and Rice are black.

Rep. Val Demings, an Orlando Democrat and former chief of police there, has also been mentioned repeatedly as a top prospect.

Biden has said he will announce his VP decision by Aug. 1.