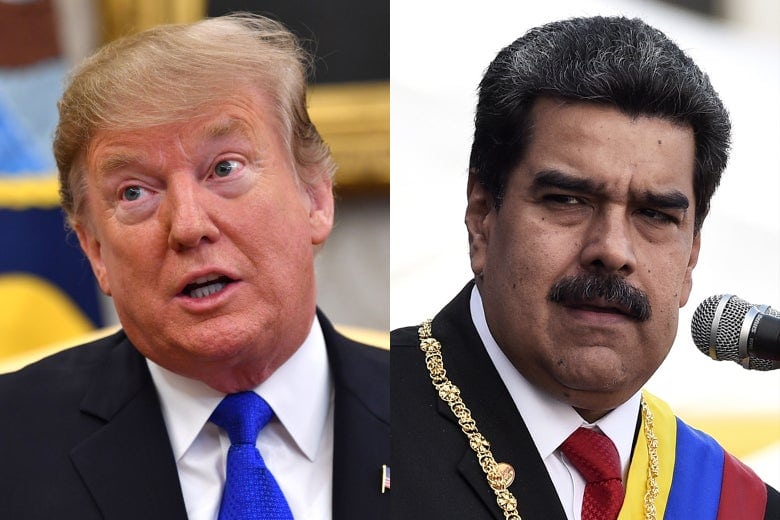 Florida Democrats are going after President Donald Trump after Trump said he would meet with Venezuela’s Nicolás Maduro.

In an interview with Axios, Trump left open that possibility while expressing some ambivalence over his decision to recognize Venezuelan opposition leader Juan Guaidó as the nation’s rightful president.

“I think that I wasn’t necessarily in favor, but I said — some people that liked it, some people didn’t,” Trump explained of the push to recognize Guaidó.

When asked whether he would meet with Maduro, Venezuela’s socialist leader, Trump said he is “rarely opposed to meeting” and that Maduro had expressed interest.

“I always say, you lose very little with meetings. But at this moment, I’ve turned them down,” he said.

Trump sought to clarify his comments with a Monday morning tweet.

“Unlike the radical left, I will ALWAYS stand against socialism and with the people of Venezuela,” Trump wrote.

“My Admin has always stood on the side of FREEDOM and LIBERTY and against the oppressive Maduro regime! I would only meet with Maduro to discuss one thing: a peaceful exit from power!”

“As Venezuelans like myself watch Maduro increasingly cling to power because of Donald Trump’s erratic and failed strategy, we are concerned that Trump’s actions are weakening Juan Guaidó and pushing away our allies in the region who are working to restore democracy in Venezuela,” said Luisana Pérez Fernández, an FDP spokeswoman.

“Donald Trump continues to toy with the hopes of the Venezuelan people and exploit their suffering. This November, he will pay the price for lying to our community, and we will help elect Joe Biden, a true champion for democracy and human rights for the Venezuelan people.”

Trump was urged to back Guaidó amid concerns Maduro’s 2018 reelection was tainted by corruption. The U.S. government made that move in early 2019.

The President echoed that support during a Feb. 2019 speech at Florida International University (FIU).

“We seek a peaceful transition of power, but all options are open,” Trump said, hinting that military options were available to remove Maduro.

“The people of Venezuela are standing for freedom and democracy. And the United States of America is standing right by their side.”

Guaidó has not been able to fully wrest control from Maduro, however. Axios reports that Guaidó’s struggle to do so has left Trump second-guessing his decision to back Guaidó.

“Taking a meeting with Nicolás Maduro, who was just indicted by the U.S. Department of Justice for narco-terrorism, clearly shows his complete disregard for freedom and democracy and undermines the gains made by the legitimate President of Venezuela, Juan Guaidó, to restore democracy. The President’s words and actions are putting in danger the future of Venezuela, and the pattern is clear: Trump stands with dictators and authoritarians and desires to be one.”

Florida’s legislators — of both parties — at the state and national level have spoken out in support of Guaidó. Under Maduro’s leadership, Venezuela has faced economic hardship with hyperinflation and shortages of vital goods and services, including food.

During that Feb. 2019 speech at FIU, Trump bashed the Maduro regime and socialist governments elsewhere.

“The days of socialism and communism are numbered not only in Venezuela, but in Nicaragua and in Cuba as well,” Trump said.

“As the United States stands up for democracy in Venezuela, we reaffirm the solidarity with the long-suffering people of Cuba and Nicaragua and people everywhere living under socialist and communist regimes.”

That tone appears to have changed, and U.S. Rep. Donna Shalala joined the new chorus denouncing the shift.

“The recent reports confirm what many have suspected for some time — President Trump has been charmed by the authoritarianism of Nicolás Maduro,” Shalala said.

“This is a sad day for the Venezuelan people, democracy, and America’s leadership in the world. I continue to stand with President Juan Guaidó and will continue to work alongside the people of Venezuela as they seek to peacefully restore democracy.”

Trump and other Republicans have long tried to frame Democrats’ policies as “socialist” in order to deflate their approval among the Latino community.

“To those who would try to impose socialism on the United States, we again deliver a very simple message: America will never be a socialist country,” Trump said in 2019.

That tactic is especially used in South Florida, given its demographics. Maduro in particular has been toxic and the source of some infighting among Republicans in recent weeks. That raises the question of how Trump’s new position will affect his standing in the region.

While Republicans have tried to tar South Florida Democrats as “socialists,” the condemnation of Maduro has consistently been bipartisan.

It’s offensive and simply disgusting that the president of the United States would call a brutal dictator like Venezuela’s Nicolás Maduro a ‘strong leader’ and be willing to meet with him,” said Miami-Dade Commissioner Daniella Levine Cava, who is also running to be the county’s next Mayor.

“This is a slap in the face to our vibrant Venezuelan community.”

“Joe Biden’s basement brand foreign policy begins and ends with high praise for Nicolás Maduro’s hairstyle, as the [Barack] Obama-Biden administration did nothing to curb the tyrannical hold the [Hugo] Chavez-Maduro regime has kept on Venezuela,” said Andres Malave, a Trump Victory spokesperson.

“President Trump invited Juan Guaidó to the State of the Union, rallied hundreds of nations to support Guaidó as the legitimate leader of Venezuela, and is standing up to socialism and promoting democracy across the world.”