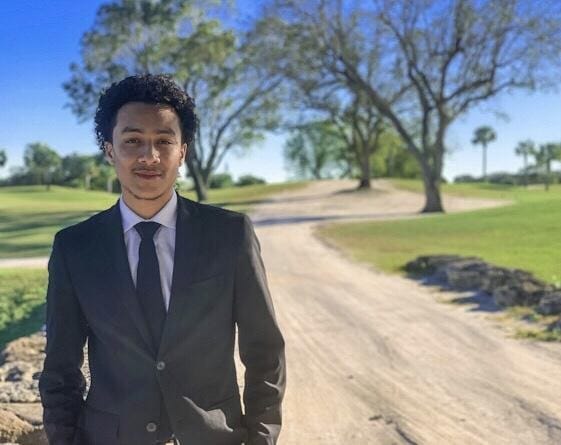 No, I knew I would be challenging not only an incumbent, but a party leader. I’ve spoken to constituents in the community and they have all said they want new leadership.

I don’t have an inner or outer circle like most people in politics, but I have good contacts and people I’ve met on this journey that have given me plenty of wisdom. I really on what I believe is the right thing to do, what feels genuine, and the people in the community.

Me, myself, and I. My campaign is the definition of a grassroots operation, especially with everything now, but I have people who work in a lot of the industries that make up the political world who help me along the way.

Leslie Parchment, she’s a good friend of my moms. My mom reached out to her contacts to help me get started fundraising and when she told me she donated she said it was because she remembered taking care of me as a child and wanted to invest in my future.

In Florida, I would easily pick Rep. Anna Eskamani; I love her passion and how active and engaged she is with her community. Not only that, but she is apart of the few democrats in the legislature who speak out on issues that many would be afraid to do.

Many are not genuine, many are worried about the next race, the next seat, and how to establish their name over the people’s interest, as well as the fact that many are stuck in their ideological views. My goal is to bring the justice the seat deserves.

Raising the per pupil spending and our rank as a state in how we invest in students; common sense laws to penalize, protect, and enforce environmental protections for our state ecosystem; implementing a global payment system in our public health care institutions to reign in monetization of the healthcare industry so we can have a patient focused healthcare system that doesn’t place people in debt.

Public school funding being diluted by the charter school system; I believe we should have a choice in a children’s education, but not at the cost of others. Charters schools have a 70% fail/close rate in Florida and that takes away money from our public institutions to fill the pockets of for-profit schools with little oversight. We cant let profit undermine our education system in Florida.

Not only do we need a new progressive and effective voice in Tallahassee for our district; we need to be compensated as one of the biggest parts of the states economic engine. We need updated infrastructure to acclimate to climate change and its effects, we need better housing to adapt to climate change and that provides a quality lifestyle for all. District 33 needs a legislator who is active and engaged so people can trust and know there is someone fighting for them.  My district needs and wants their concerns to be addressed so they can get the change they’ve been hoping for.

Not the easiest to answer. I believe all the governors had a few good instances. Gov. Ron DeSantis seems to care about the environment, which is new considering former Gov. Rick Scott didn’t care to address it. But his response to the covid crisis is terrible in terms of leadership. Scott did a fairly good job when it came to addressing hurricane season such as Wilma but was too business focused and not for the peoples interest. Former Gov. Charlie Crist prioritized education, which improved a lot, and former Gov. Jeb Bush focused on conservation. They all had their goods and fault but I don’t see how any of them could receive such a title as “Best”.

– Section 7: Natural resources and scenic beauty, subsection C addressing oil exploration and drilling. As we transition to renewable energy, it in the interest of the state and the environment to do away with oil exploration as it only does more harm than good for tax payers, ecologically, and long term gains of achieving an equitable future for all Floridians.

Yes and no; a lot of candidates focus on name recognition and not what they are fighting for, they help in showing support from constituents a like but it is not effective unless they place them everywhere in the county.

Believe it or not, everyday and periodically in the day, I read Florida politics; it’s the fastest way to consume political news and events in the state, it gives me more clarity as to what the Sunrise podcast is speaking about too.

I read all the major and minor news outlets through the Apple News app. I don’t rely on the public broadcasts of the news so much to help eliminate biases in the presentation of the argument. I believe you have to read both sides to get an understanding, that’s the only way to think of a bipartisan approach.

We need a bold new voice in FL Politics, a progressive one at that. The people want change now and we must give it to them. I will work for that change, rally the people, and give them the hope they’re looking for. Let’s keep #MovingFloridaForward, vote Steven Meza.

I’m definitely not the sportiest, but I would have to say basketball. A team? I’m not sure since some are all star teams, but the Heat all the way when LeBron James and Dwayne Wade was still here.