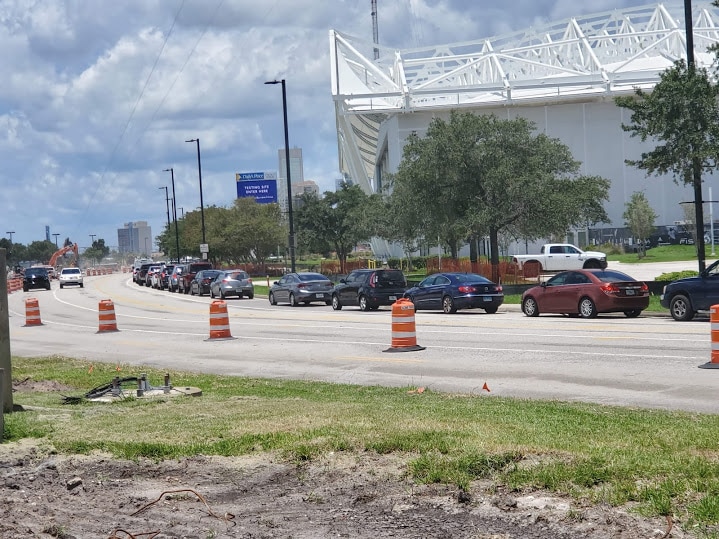 Demand is so high for coronavirus tests at Lot J outside TIAA Bank Field in Jacksonville, cars are backed up on Bay Street wrapping around the stadium. Photo via Drew Dixon.

Monday’s total number of cases in Northeast Florida came it at 12,798, up from 12,318 Sunday. There were also three additional deaths attributed to COVID-19 Monday on the First Coast bringing that total to 118. The number of hospitalizations in the area now stands at 618.

Jacksonville accounted for most of the cases, increasing by 348 to 9,835. While a jump of more than 300 new infections in one day is notable, it’s nowhere near the record numbers of more than 700 new daily cases that Jacksonville was recording in the past two weeks.

Jacksonville also added two deaths for a total of 70.

The increasing numbers in Duval County come as Jacksonville announced the city will open three new federal testing facilities. Each of the sites on the city’s Westside, Northside and Arlington neighborhoods will be drive-through optional.

The new sites come as the city’s most popular testing site outside TIAA Bank Field in Lot J has been overwhelmed with hundreds of area residents lining up on a daily basis. Lines have been so long that cars have been backed up for blocks and some people have had to wait for hours before tests were administered.

St. Johns County is showing the same trend with 10.6% of its coronavirus tests showing positive results as of Monday.  St. Johns averaged an 11.7% positive test rate for the past week.

Nassau County increased from 325 cases Sunday to 346 Monday and recorded only its second death since the outbreak began in March.