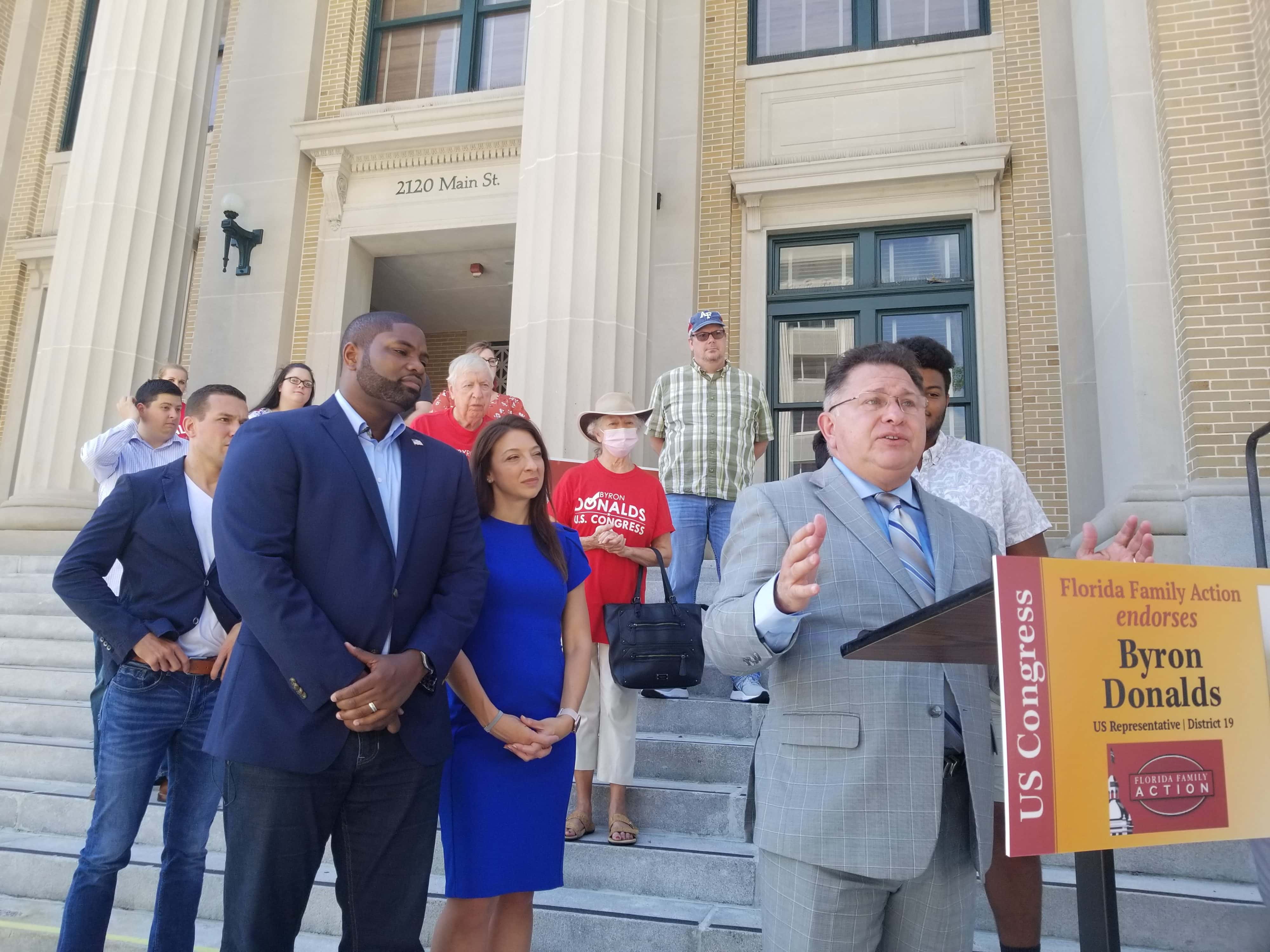 John Stemberger called it the biggest and most strategic endorsement this cycle.

“I would tell the people watching that it’s time that we send true conservative leadership to Washington,” Donalds said. “I am that candidate.”

Founder John Stemberger traveled to Fort Myers to deliver the group’s support in front of the Old Lee County Courthouse.

“Byron Donalds is a husband, is a father, and is a model citizen,” Stemberger said. “He’s a man of integrity. He’s a man of honesty and a man of principle.

“And in my opinion Byron Donald’s is the future of the Republican Party in America.”

Donalds, now a second-term state Representative announced in January he would forgo seeking a third term to run for an open congressional seat. He’s one of nine Republicans running in the August primary.

Stemberger, an influential figure among evangelical voters, told Florida Politics picking Donalds in Florida’s 19th Congressional District was among the most important decisions in 2020.

“It’s probably the biggest, most strategic endorsements in the state,” he said.

While careful not to disparage other candidates, Stemberger saw Donalds as a lawmaker with a reliably conservative voting record. Moreover, he has a presence, Stemberger said, that shows a boundless future in politics.

Church leaders who have worked with Donalds from his time as a youth pastor surrounded the candidate and sang his praises. Supporters also pushed back at recent mailers and television ads from Honesty America painting their candidate as a “Never Trumper” and a former criminal.

Allusions were made to a speeches Donalds gave at Donald Trump rallies in 2016.

Donalds himself addressed his personal record, including a 1997 marijuana arrest and a 2000 bribery arrest.

He said a religious redemption helped him enter a new phase.

“Those years being a youth leader, it wasn’t just teaching teenagers how to make wise decisions for themselves. It was also helping me really rebuild my life and really live a life pleasing to the Lord. I tell voters all the time, I messed up but I spent the last 20 years making up, and I’ve never given up.”

His wife, Erika Donalds, recounted how she and Donalds dated in college before either found their faith and got back together later in life to raise a Christian family together. She also described her husband as a man who turned to God to make major decisions, even ones that didn’t seem logical within the “natural world,” but which led the family to success. That includes his decision to run for Congress.

“He had a safe seat in the House of Representatives for Florida with four more years in his term, and a path to the Senate,” Erika Donalds said.

“In the natural — and by many political advisers — there’s no reason for him to jump ship and take a chance on a congressional race that’s going to get ugly, that’s going to be expensive. But as Byron always does, he took the time to pray.”

As a Black man running on the Republican ticket, he also addressed a question from Florida Politics on the role evangelicals should play in the significant race relations friction taking place in the country.

“It’s important that not just evangelicals but all Americans carry the love of God toward their fellow man,” he said. ”If you take a step back from CNN and MSNBC and probably the viral videos of rioting and looting and even peaceful protesting — or even what happened to George Floyd and Breonna Taylor in Louisville, Kentucky. If we can take a step back from that and you examine your neighbors, people largely in America live in harmony and peace. That’s what the news doesn’t cover.”

“We all just want to be peaceful citizens with one another.”