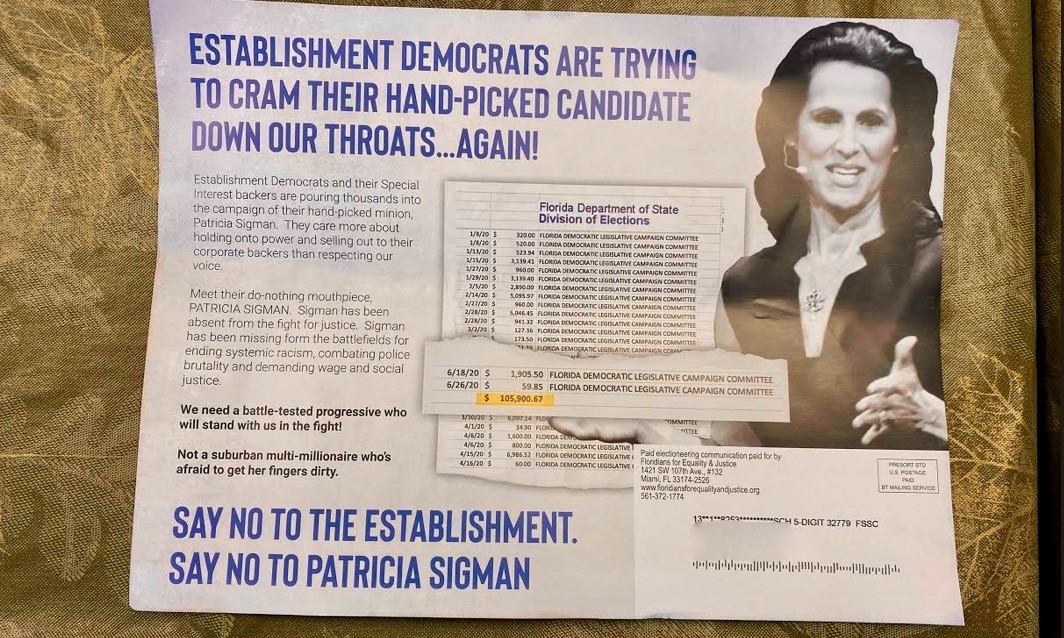 Is a 'dark money' group behind them? Are Republicans?

All well and good for Ashby, if the mailers are legitimate. However, Floridians for Equality & Justice is not registered as a political committee with the state. Democrats supporting Sigman have not been able to trace it to anyone or any other group. Nor has Florida Politics.

Sigman’s allies believe it’s a fraud, that it’s using illegal “dark money” to try to influence an election. And they’re raising suspicions that it might be perpetrated by Republicans trying to stop Sigman from winning the Aug. 18 Democratic primary.

“Floridians for Equality and Justice are using Republican dark money tactics in an attempt to influence a Democratic primary,” Senate Victory, the Democratic senators’ committee set up to help elect Democrats to the Senate, charged in a news release.

Sigman, an employment lawyer, and Ashby, a communications engineer, are in a five-way Democratic primary fight seeking a chance to take on Republican former Rep. Jason Brodeur for the open SD 9 seat, representing Seminole County and parts of southern Volusia County. The other Democrats are lawyer Alexis Carter and activists H. Alexander Duncan and Guerdy Remy.

As one mailer charges, Sigman indeed is the preference for the Democratic establishment in Tallahassee. They recruited her and have provided at least $119,905 in in-kind support to her campaign, much of it through Senate Victory, and most of the highest-profile Democratic endorsements. That has been an issue for at least one of her Democratic primary opponents, Remy.

Yet, realistically, Sigman also might be the only Democrat with the resources to take on Brodeur. He’s the president of the Seminole County Regional Chamber of Commerce and a former state Representative with strong ties to the Republican establishment. And he’s raised more than a million dollars to support his Senate bid. Sigman has raised hundreds of thousands of dollars in campaign money, while the other Democrats have raised only a few thousand dollars each, if that.

That’s got Sigman’s allies in Tallahassee charging that someone — they suspect the GOP — is trying to persuade Democratic voters in SD 9 to reject Sigman and nominate someone far easier for Brodeur to defeat. They said they’ve seen the tactic before.

In a text, Brodeur said he’s never heard of them, calling it “total mystery.”

On Facebook, Ashby indicated he has no knowledge of the group and he denounced any illegal campaign activities.

One mailer shows a picture of Ashby with Democratic Sen. Annette Taddeo of Miami. She endorsed Sigman. Regardless of who might be behind the mailers, Taddeo expressed anger that the mailer implies she supports Ashby.

“I am outraged this organization would use my likeness to promote a candidate I do not support,” Taddeo stated in a Senate Victory news release. “Patricia Sigman has my endorsement because she is the only candidate in this race who has a proven track record of fighting on behalf of Central Floridians. Dark money attacks have no place in a Democratic primary, and a real progressive would never resort to using dark money to win an election.”

The mailers contain only a post office box address in Miami and a phone number that immediately rings to voice mail. Florida Politics left a message but got no response. The group is not listed with the Florida Secretary of State as required for electioneering communications, nor as an incorporated entity in Florida.

One mailer, which declares its endorsement for Ashby as “the True Progressive,” bemoans, “For too long establishment Democrats have been forcing their will on our progressive movement. Choosing our nominees and ignoring our voice. They did it with Bernie and they’re trying to do it again.”

The organization has a website. But the only information on it is generic material about progressive politics that could have been aggregated from anywhere. There is nothing specific about the organization, or its mission, values, causes, leadership, funding, or candidates.

The website does include a few links to legitimate progressive political organizations in Florida. And some of them are not happy about that.

“We condemn any group that seeks to use our reputation to further their dark money politics,” Equality Florida’s Senior Political Director Joe Saunders said in the Senate Victory release.