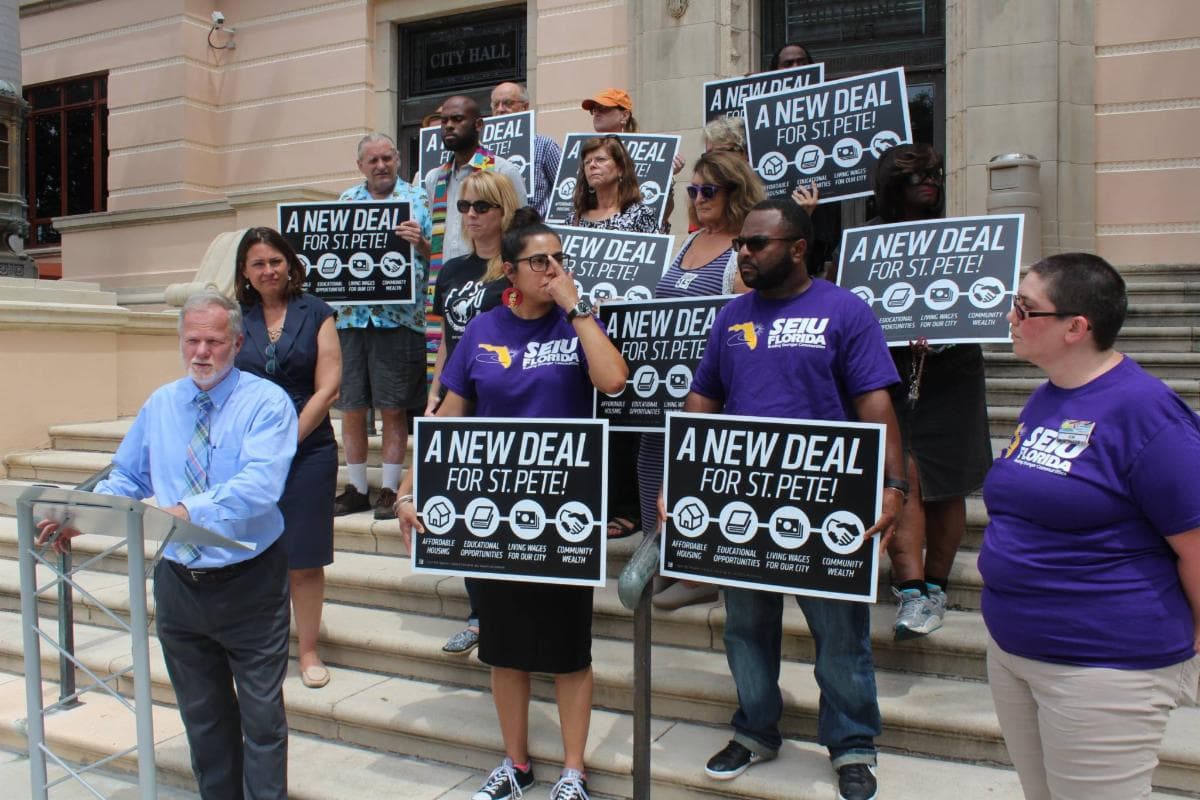 Nurse faces backlash from community leaders for running in the county's only reliable Black district.

Pinellas County School Board candidate Karl Nurse is in the hot seat after using a photo featuring members of the Service Employees International Union Florida (SEIU) without consent in his recent campaign mailers.

Nurse, a former St. Petersburg City Council member, is one of four candidates running for the District 7 seat on the School Board .

Nurse is the only white candidate in a district that has been the board’s only minority seat for years. If he wins, the Pinellas County School Board will not have a single person of color. A Black school board member has held the seat for well over a decade, with Rene Flowers occupying the seat since 2012, Lew Williams before her and Mary Brown before him. Brown was the first African American elected to the School Board, a milestone the Black community didn’t achieve until 2002.

District 7 is the only single-member district with more than 10% Black voters. District 4 has just 3% Black voters, District 6 just 4% and District 5 10%. District 7’s voter registration is 30% Black.

Several community leaders, both within the Black community and among its allies, have criticized Nurse for running in the county’s only reliable minority district. Now he’s under fire for using photos of himself and members of the (SEIU) on a campaign flyer.

The image is from a press conference touting the New Deal for St. Pete when Nurse was on City Council. While the photo is authentic, some members of SEIU argue it falsely implies they support his candidacy for School Board. The organization hasn’t endorsed a candidate in the race and some of its members support other candidates.

Brother John Muhammad, president of the Childs Park Neighborhood Association and community member of the SEIU, was featured in the picture used in Nurse’s campaign mailer. Muhammad called for Nurse to publicly apologize after using the photo with him and members of the SEIU without their permission, explaining it gave a false image of support for his campaign. Muhammad has publicly endorsed Nurse’s opponent, Caprice Edmond.

“I am asking Mr. Nurse to publicly acknowledge and apologize for using my, and others’ image without our permission and be clear that he has not been endorsed by me, the New Deal for St. Pete or SEIU in his school board candidacy,” Muhammad wrote in an email campaign. “The way the image is featured on the mailer gives the viewer the impression that I and those with me are in support of his campaign and candidacy, but WE ARE NOT.”

Florida Politics reached out to Nurse, who said he was surprised at the reaction from community members because the photo had previously been shared on Facebook.

“We did not realize the sensitivities of the people who were in the background in shots that were tiny,” Nurse said. “Frankly, this stuff is all organized by one of my opponents’ campaigns.”

“I picked and love the photo with my bride, Jody and grandchildren. I did not ask their permission. I should have and apologize for not asking. The designers picked photos that others had posted on Facebook. The intent was to illustrate the work I did on the City Council. In hindsight, we should have stopped and asked permission from the others in the photos to reuse widely distributed Facebook posts. I apologize.”

Even his apology received backlash, with some arguing it was dismissive and back-handed.

“The joke makes the apology feel backhanded. I’m confused about the messaging here. Is it your intention to tell the angry people to go dig a hole?” wrote resident Jim House, referencing Nurse’s quip about asking his wife and grandchildren if they were OK with the photo.

Others wrote that the apology wasn’t really an apology, with one person calling it “a slap in the face.”

“Disappointed to see the paper’s recommendation of Karl Nurse for school board. No matter your opinion of Karl, it would be a tragedy to have an all-white school board in a county and city as diverse as ours. Representation matters more than ever. Our students deserve better,” St. Pete Mayor Rick Kriseman wrote on Facebook.

At the end of Kriseman’s post, he left a link to a list of all the Pinellas County School Board District 7 seat, encouraging voters to check out other candidates.

Despite the backlash, Nurse still hopes people can see him for his character and his work as a former St. Petersburg City Council member.

“I don’t think there’s any local politician who could give you more that they had done to try and turn around the inner city than me,” Nurse said. “And that’s why I, historically, have always done well and that’s why people judge me by the content of my character and not the color my skin.”