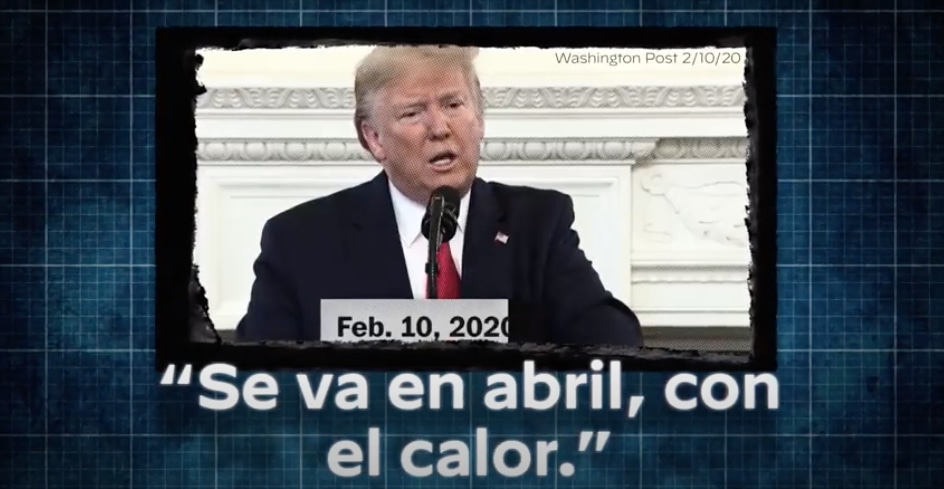 'This is not a test'

“This is not a test” the 60-second commercial, “Esto no es una prueba,” warns.

The commercial then runs through a series of Trump statements and news reports about the coronavirus crisis resurgent and out of control, accusing Trump of being “unprepared, and making it up.” It then moves on to Trump’s various demands that schools reopen this fall, “because he thinks it will save his reelection … threatening their funding, ignoring the science, risking teachers’ and parents’ lives.”

“Do you trust him to do what’s best for our children? Because this is not a test. Trump is failing,” the narrator concludes in Spanish.

The ad ends with audio of Trump’s proud statements two weeks ago after he took a cognitive-disorder test and declared, “I aced the test.”

Trump’s campaign responded by accusing Biden of wanting “to hold America hostage by keeping our schools and economy closed to appease his radical base. Even the American Academy of Pediatrics, CDC and Dr. Fauci have urged for schools to reopen. Meanwhile, President Trump continues to exhibit bold leadership as his administration works aggressively to develop a coronavirus vaccine, reopen our economy and safely return Florida’s students to the classroom,” said Trump Victory spokesperson Danielle Alvarez.

The commercial makes no reference to state or local school decisions, as Trump allies Gov. Ron DeSantis and Education Commissioner Richard Corcoran have put out somewhat conflicting statements on what’s expected, or of Miami-Dade schools’ new decision, in the ad’s market, to open online education only August 31 and not resume in-person instruction before Oct. 5.

The ad starts running Thursday as part of a six-figure buy on Miami-area TV, radio, and social media, targeted to reach Latino parents with school age children and teachers.

“Donald Trump has put Florida families in an impossible position. Parents shouldn’t have to stay up at night worried that the President of the United States is compromising their kids’ safety. Children shouldn’t be exposed to a deadly virus, or risk passing the virus to their parents, grandparents, and loved ones. Trump will do anything to help his reelection chances. He can’t be trusted to make this life-or-death decision for our children. It’s time for a leader who will protect Florida kids, and give families and teachers the support they deserve. It’s time for Joe Biden,” DNC Chair Tom Perez stated in a news release about the commercial.