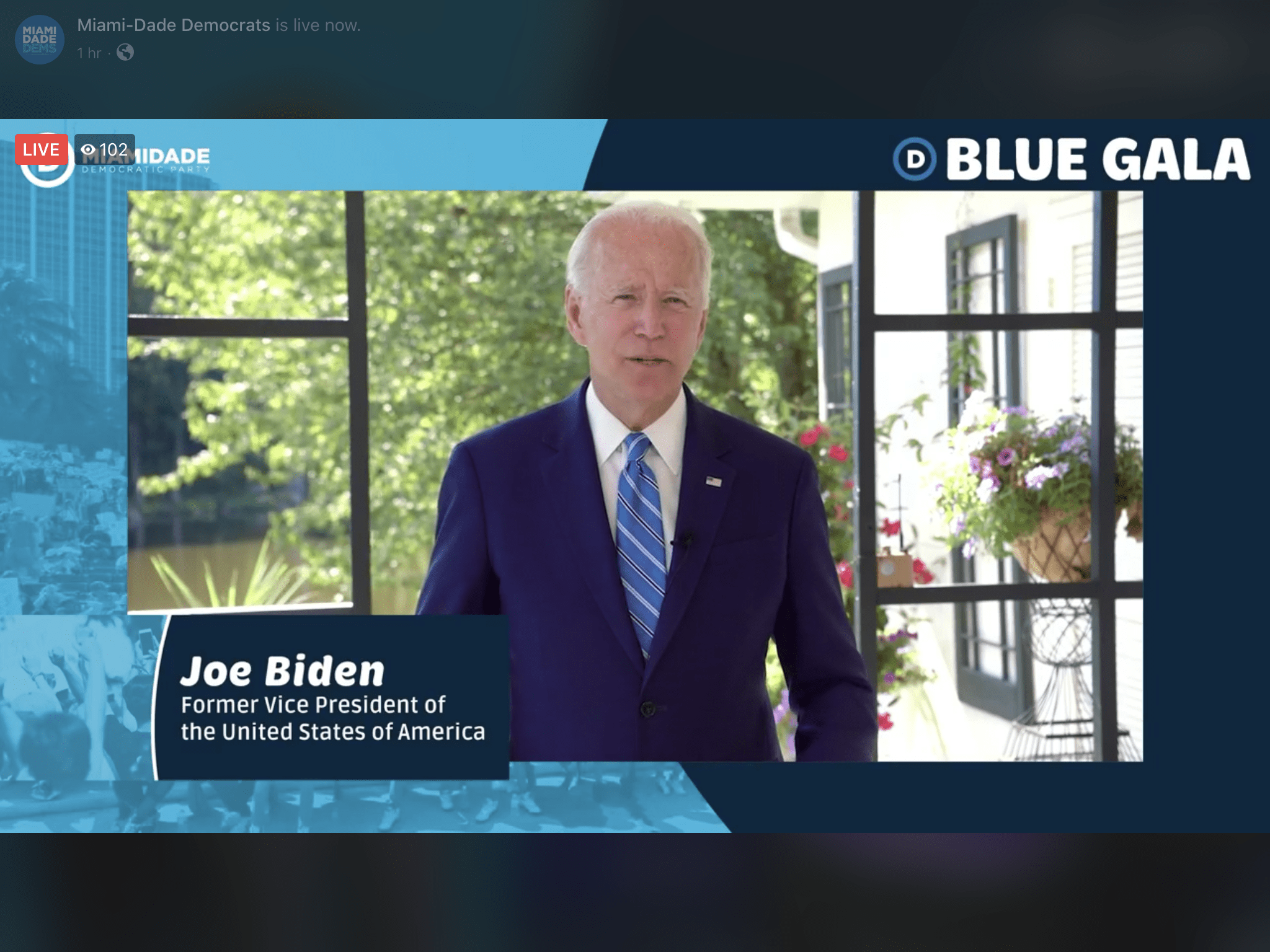 Joe Biden had the attention of Florida Democratic voters on Thursday night.

Biden, the keynote speaker of the Miami-Dade Democratic Party’s Blue Gala, sounded an optimistic tone about the upcoming election and said victory would mean working together with intensity and alacrity.

The former Vice President began by saying that he wished he could be there in person; he was speaking on a remote video feed patched in to the virtual event, and he spoke about the current lay of the land in America.

“We have more COVID infections than any other country in the world. And millions are still out of work,” Biden said. “We’re grappling with the legacy of systemic racism which has kept us for too many years from realizing our full share of the American Dream for so many Americans. Today we’re dealing with multiple national crises all at once. We need real leadership that recognizes the real threat of this pandemic, that doesn’t just wave the white flag of surrender like the President has.

“We need leadership that brings everybody to the table to rebuild an economy that works for working families and creates millions of good paying jobs for the future.”

U.S. Reps. Donna Shalala, Debbie Wasserman Schultz and Debbie Mucarsel-Powell also spoke Thursday night, and Biden said the Democratic party will need to win at every level in order to steer the country toward a better path.

“We have to do more than just beat Donald Trump,” he said in one of two direct references to his electoral opponent. “We have to keep the House of Representatives and we have to win the Senate. We have to lead and deliver meaningful change for the millions of people who are hurting all across this nation. That means we need strong state parties, strong county parties, strong Democratic organizations at all levels across every single state. “

President Trump said Thursday that the election may have to be postponed, but Biden wouldn’t take the bait.

“This is a challenge we’re unwilling to postpone. Folks, I refuse to postpone,” he said. “The soul of America is at stake in this election. That’s the reason I decided to run. That’s why I stand united with every single Democrat in our shared mission to beat Donald Trump and restore decency, dignity and leadership to the White House.”

A recent Mason Dixon poll put the challenger ahead of the President in Florida. Biden said that the stakes have never been higher in an election season, and he said it was vitally important to stand united and support people in the Black, Latino and Asian and Pacific Islander communities.

“If we stand together, as one America, we’ll win the battle for the soul of this country,” he said. “Our children are counting on us. This is the United States of America. There’s not a single thing we’re unable to do when we do it together.”

“Joe Biden is running an anemic campaign, embracing socialism and failing to engage with the Latino community in Florida,” said Trump Victory spokesperson Emma Vaughn. “Nearly 100 members of his own Florida staff have accused the Biden campaign of suppressing Hispanics and creating a toxic environment. Floridians will vote to re-elect President Trump and Republicans up-and-down the ballot come November.”