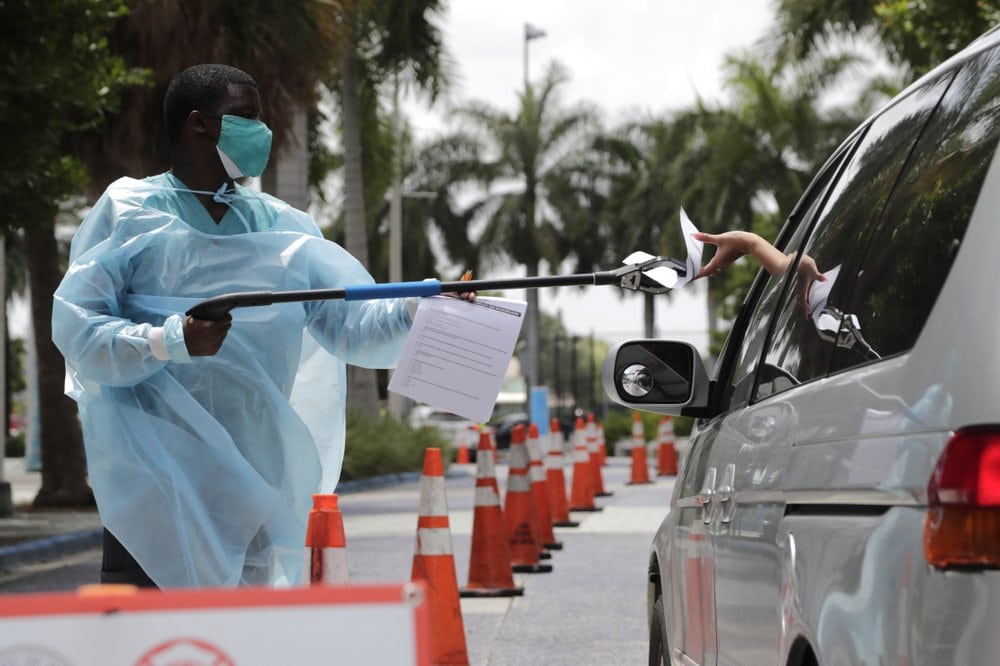 Healthcare worker Dante Hills passes paperwork to a woman in a vehicle at a COVID-19 testing site outside of Marlins Park in Miami. Image via AP.

The first-term Republican was on Fox Business Friday morning with host Stuart Varney when he took issue with the state’s decision to close down testing sites ahead of Hurricane Isaias.

“You shut down a testing center, you just slow down information,” Scott added.

Gov. Ron DeSantis, addressing media in Tallahassee at the Emergency Operations Center, noted that shutting down state testing sites along the east coast would not bring the effort grinding to a halt.

“The sites are part of what is done on a daily basis but they aren’t even close to the total number [of tests] done,” DeSantis said.

The Governor went on to note that testing isn’t a panacea, saying Friday that “we’ll get data dumps for positives that were three weeks ago.”

“People can test positive for weeks on end,” DeSantis added, but there’s a “relatively short period of time when you can transmit this thing.”

Whether those words will change Scott’s narrative is an open question, but he has continued to contend that a failure of messaging good information has led to a lingering crisis in Florida and other hotspots.

“It comes down to this: Florida and every state has got to give people the information and let them know how they can protect themselves and talk about it constantly,” said Sen. Rick Scott Thursday on the Fox News Rundown.

The Senator therein suggested the first-term Republican’s messaging had considerable room for improvement, offering his own performance as Governor as a potential corrective.

“When a hurricane was bearing down on my state,” Scott noted, “I was giving a press conference every few hours.”

As testing is curtailed, deaths in Florida continue to mount, the storm’s approach notwithstanding.

Results reported by the Florida Department of Health on Friday show yet another record day of deaths, with 257 of them tallied between Thursday and Friday’s reports.

Cases were down from record levels in recent days, with 9,007 new diagnoses in Friday morning’s report.

All told in the state, 6,843 deaths have been attributed to COVID-19 thus far, a number destined to tick upwards as deaths from previous days and weeks are added to the total.

Florida continues to wrestle with positive testing rates over 10% daily, which illustrates the risk in pausing that process given rampant community spread in numerous parts of the state.