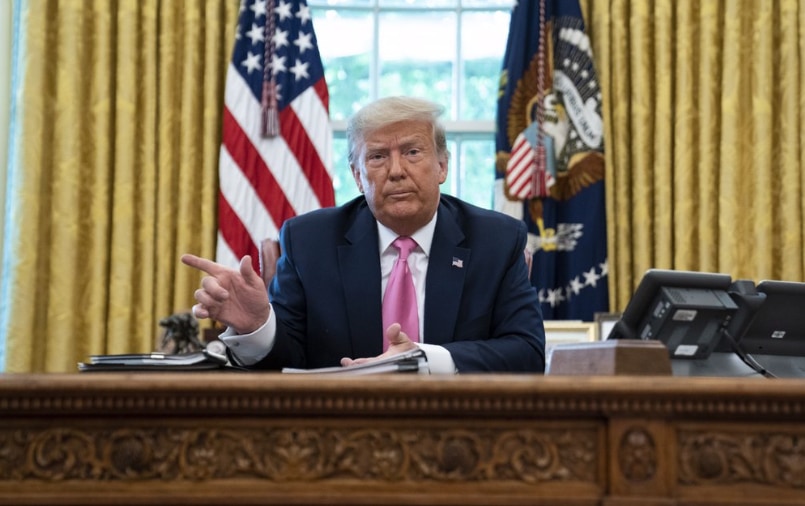 President Donald Trump has raised doubt about the integrity of vote-by-mail systems around the country. But in a Tuesday tweet, he gave Florida’s system his seal of approval.

“Whether you call it Vote by Mail or Absentee Voting, in Florida the election system is Safe and Secure, Tried and True,” the President tweeted. “Florida’s Voting system has been cleaned up (we defeated Democrats attempts at change), so in Florida I encourage all to request a Ballot & Vote by Mail!”

“They have a very good system of mail-in, and that would be absentee or even beyond absentee,” he said. “In the case of Florida, there aren’t too many people who would qualify. They are so well run. Florida’s a very well-run state. Low taxes, low everything.”

“In Nevada, where you have a Governor, he said, ‘Let’s just send out millions of ballots,” adding that post offices cannot handle such an influx. But noted he had not spoken to the Postal Service.

“You can’t do that,” he said. “I can’t imagine the post office could do it. All of a sudden they’re going to be dealing in millions of ballots.”

Florida’s post offices, he insisted, “are built up there.”

On Thursday, Trump floated the possibility that the nation delay the Nov. 3 presidential election over fears about voter fraud with mail-in ballots. That suggestion drew criticism from Republicans and Democrats.

Trump tweeted Thursday: “With Universal Mail-In Voting (not Absentee Voting, which is good), 2020 will be the most INACCURATE & FRAUDULENT Election in history. It will be a great embarrassment to the USA. Delay the Election until people can properly, securely and safely vote???”

Gov. Ron DeSantis at a press conference later that day said he had not see the President’s tweet, and appeared taken aback by the suggestion.

The Governor, who has been criticized by Democrats for being in lock-step with Trump, noted the President’s concerns. Yet he defended Florida’s vote-by-mail system, which he said has necessary safeguards to avoid “ballots flying out there, willy nilly.”

“There’s some people that say you should just mass mail ballots to every address, regardless of whether they request it or anything. And I do think that creates some problems in terms of potential for fraud.”

“That’s not what we do in Florida,” DeSantis added, saying “you can request a vote-by-mail ballot.”

Trump’s tweet last week came on a day of bad economic news. The government reported the U.S. economy shrank at a dizzying 32.9% annual rate in the April-June quarter, by far the worst quarterly plunge ever, as the coronavirus outbreak shut down businesses, threw tens of millions out of work and sent unemployment surging to 14.7%.

There is no evidence of widespread voter fraud through mail-in voting, even in states with all-mail votes. Five states already rely exclusively on mail-in ballots, and they say they have necessary safeguards in place to ensure a hostile foreign actor doesn’t disrupt the vote. Election security experts say that all forms of voter fraud are rare, including in absentee balloting.

Last month, Florida reached a settlement in a legal battle over a request to expend the vote-by-mail deadline because of the COVID-19 pandemic. The agreement requires Secretary of State Laurel Lee to “educate” and “encourage” county supervisors of elections about a variety of vote-by-mail procedures that were at the heart of the lawsuit.

Whether you call it Vote by Mail or Absentee Voting, in Florida the election system is Safe and Secure, Tried and True. Florida’s Voting system has been cleaned up (we defeated Democrats attempts at change), so in Florida I encourage all to request a Ballot & Vote by Mail! #MAGA