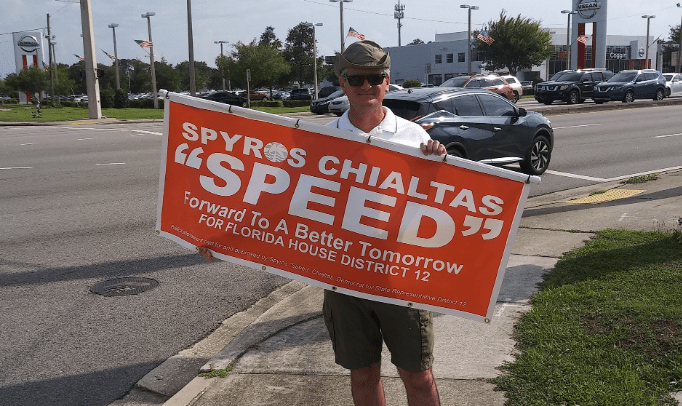 So you're saying there's a chance? Dems buck long odds in Duval.

In HD 12 and 15, incumbent Republicans Clay Yarborough and Wyman Duggan are safe bets to get two more years, but not without opponents in November.

In both districts, underfunded Democrats look to score the upset, but to get the right to be on the November ballot, they have to survive Aug. 18, and a forum Thursday night via host group Collective Voice Partners allowed them to make their cases.

The HD 12 Democrats squaring off are Realtor Spyros Chialtas and Emmanuel Blimie.

Neither is well-capitalized, with Chialtas having $2,000 on hand as of this writing and Blimie, who has $3,500, is entirely self-financed.

Quotes from one of the candidates in the Southside Jacksonville district were lively.

“One of my favorite things to do as a kid was play Army and here I sit as a 13 year Army veteran,” Chialtas declaimed in a rat-a-tat-tat staccato cadence.

Blimie no-showed the event, alas, depriving voters of contrast between himself and Chialtas.

In Westside HD 15, it’s a choice between Jay McGovern and Tammyette Thomas.

McGovern has run for office before, including an out of region bid in Florida’s 6th Congressional District in recent years. Thomas is new to politics.

McGovern said he could win over Republicans, a proposition that he admitted has proved difficult for Democrats in recent years.

“We know there are a lot of veterans in this district and the successful Democratic candidate to win the seat will be a veteran,” the candidate hypothesized.

Thomas described herself as “the change agent that’s needed in District 15.”

“I am a mother, a wife, a small-business owner … an adjunct professor … a certified life coach and a pastor,” the candidate said.

When asked what separates her from Duggan, Thomas said it’s her “visibility in the community,” a statement which might surprise Duggan, a fixture in Ortega and in City Hall both.