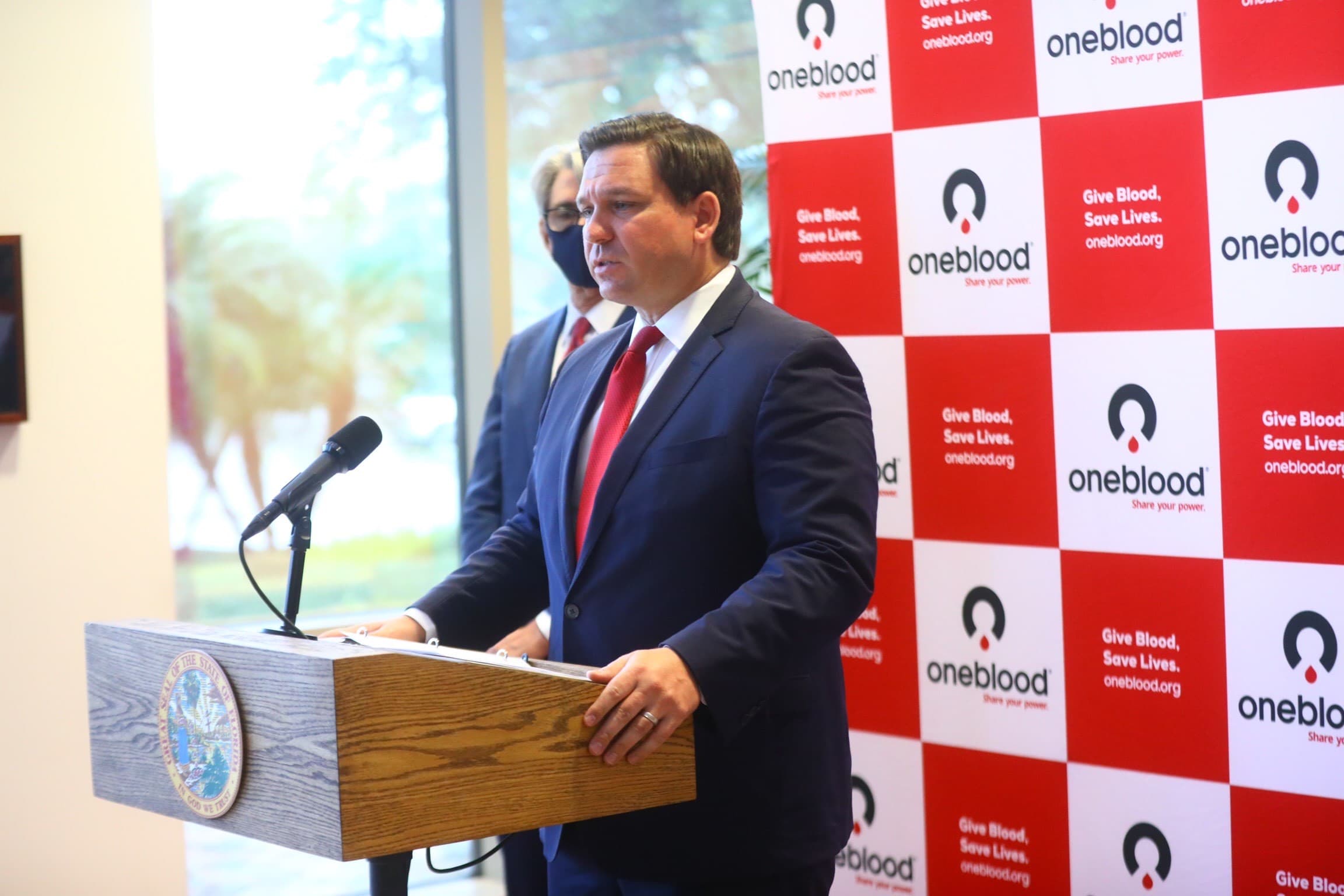 Ron DeSantis is stressing the benefit convalescent plasma can have for patients battling COVID-19.

As Florida sees another week of favorable trends in the COVID-19 pandemic, Gov. Ron DeSantis continues to push for plasma donations from people who have already overcome the disease.

About 6,300 people are currently hospitalized with the disease in Florida, and convalescent plasma infusions appear to be a successful treatment to ward off the virus.

At least 20% of people who have taken serological tests, which show whether someone has defeated the virus recently, have tested positive for antibodies. While the Governor cautioned that it’s not from a representative sample, he highlighted it as a good sign for the state.

“Clearly there’s been an increase in the seroprevalence in the state of Florida, and I think that has been probably the major factor in seeing some of the diagnostic testing going down, the percent positivity going down,” he said.

DeSantis last month traveled to OneBlood’s Orlando headquarters to tout the treatment option and to encourage plasma donations from people with antibodies. But he brought the message to the Capitol Thursday with a family whose lives were impacted by plasma.

Gail Murray, who already has a lessened immune system with leukemia, said she recovered from the disease within a week of receiving a transfusion from her son-in-law, Steve Isaacs.

“I know that I would not have made it had I not received plasma from Steve without a shadow of a doubt,” Murray said. “I was so sick that I knew and pretty much prepared in my mind that that was the way I was going to go, not being with my family, not being able to see any of them.”

First Lady Casey DeSantis, who co-hosted the panel, dubbed Isaacs the “son-in-law of the year.”

“I’ll do it as many times as I can,” he said, stressing the selflessness of donating.

Murray’s daughter and Steve’s wife, Theri Isaacs, now believes she contracted the virus after getting coffee at Starbucks with a New Yorker who ended up battling the disease throughout March. Theri Isaacs presumably infected her family and was the first person to be tested at Ascension Sacred Heart Hospital Emerald Coast.

But it was her husband who ultimately had the O-negative blood type that gave plasma to her mother. However, she also donated plasma and believes she helped save the life of a man from Pensacola. Both donated at OneBlood in Panama City.

“It is a bag of gold,” she said. “The irony is not missed, the fact that it looks like a bag of gold and that’s what you’re using to save people’s lives.”

Dr. Abdallah Kafrouni, a pulmonologist and critical care physician at Ascension Florida, relayed that his hospital treats patients with plasma immediately if their conditions worsen, even if they have yet been admitted to the intensive care unit.

“Are we going to be doing that in a month, we don’t know?” he said. “The more you know about this disease, it’s changing on a daily basis.”

The census at his hospital has been declining for three weeks now, Kafrouni said.

DeSantis has highlighted signs of improvement across the state, but recently cautioned against following diagnostic positivity rates. Instead, he has pointed to emergency department visits with symptoms like COVID-19 as a “leading indicator” of the virus’ trajectory.

“If you’re making decisions at a local level about some of this stuff, just be careful. You’ve got to remain a little bit flexible. To tie it to some of the data and have, say, kids’ future about whether a parent can send a child to school be tied to some private lab that dumps tests seven weeks late, that may not be the best way forward.”

“I think skewing data by letting it accumulate and dumping it, I think leaves a bad impression,” the Governor said, adding that he has asked the Department of Health to create consequences for mishandling important data.