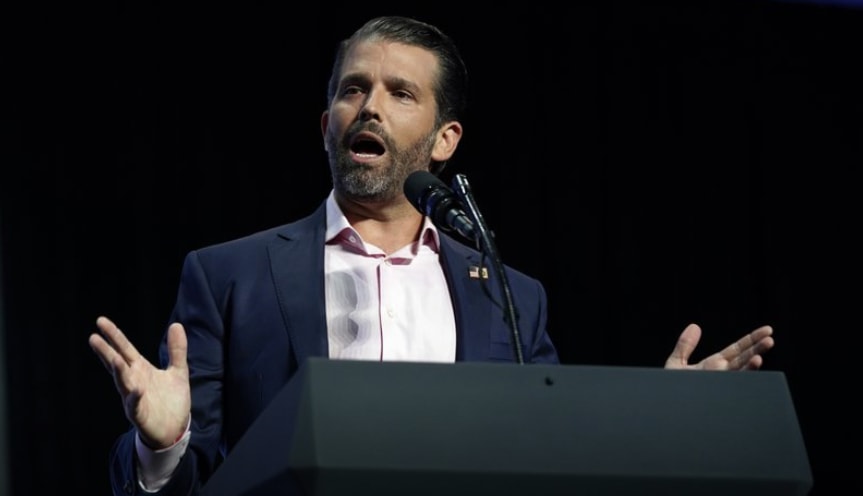 The son of the President weighed in on Twitter.

Donald Trump, Jr. made clear he has not endorsed Amanda Makki in Florida’s 13th Congressional District. In fact, he’s got nice things to say about primary opponent Anna Paulina Luna.

The son to President Donald Trump chimed in after Makki sent out mailers that included a photograph of her with the younger Trump. The mailers, sent out by the St. Petersburg Republican’s own Congressional campaign, include the simple caption “Amanda Makki with Donald Trump, Jr.” The image serves as the predominant art of the page.

When Tampa Bay Times Editor Steve Contorno flagged the item as a misleading non-endorsement, Trump himself weighed in.

“Correct. You’d think a candidate would ask before plastering my picture everywhere, implying support,” he tweeted.

“To be clear, I haven’t endorsed in this race but have heard great things about [Anna Paulina Luna], a conservative, pro-Trump Air Force veteran.”

That, in turn, prompted Luna to frame Trump’s tweet as “support for Anna Paulina Luna” in a release that also called Makki an “anti-Trump lobbyist.”

“Makki has since apologized to Don Jr., but she hasn’t apologized to the Republican voters of Pinellas County,” the release reads. “Unfortunately, this is a pattern for Amanda Makki.”

Luna meanwhile has built up a network of endorsements from strong allies of President Trump including Rep. Matt Gaetz and Turning Point USA founder Charlie Kirk.

Heading into Tuesday’s Republican primary, Makki leads in polls and in cash over three other Republicans. The winner challenges Democratic Rep. Charlie Crist in November.

The hope for Luna heading in to Tuesday is that the momentum from so many Trump loyalists will help her topple Makki, who she has tried to brand as a Never Trumper and establishment pick.