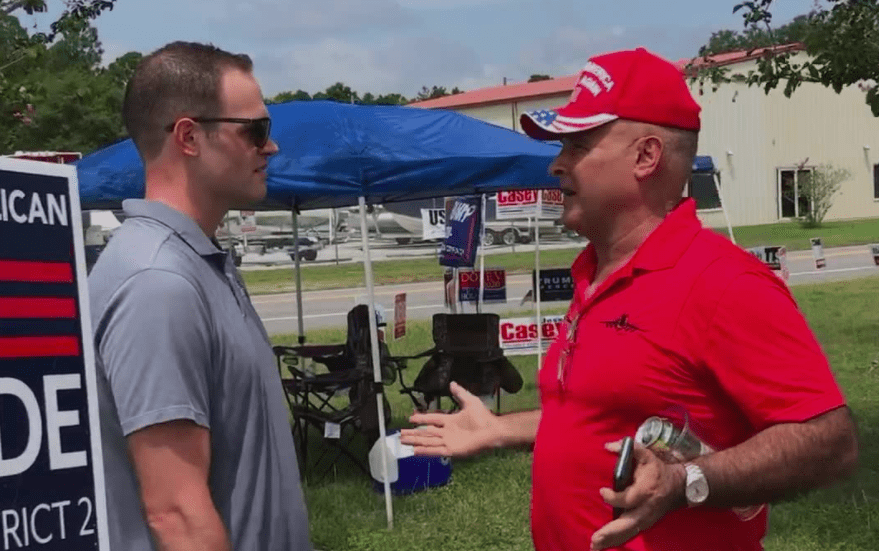 The confrontation marks the latest clash in the pair's race for House District 2.

A seven-second clip of the face-to-face confrontation was posted on the City of Milton Political Circus Facebook page and shared on Twitter. In it, Dosev can be heard calling Andrade a liar and describing him as someone capable of killing a dog.

“You’re a liar and you know what?” Dosev told Andrade. “I wouldn’t put it past you trying to kill my dog. That’s the kind of guy you are.”

In an interview with Florida Politics, Andrade said the incident began when Dosev started yelling at several campaign volunteers for supporting his reelection effort.

“What I remember him saying was: you supporting this man tells me everything I need to know about your awful character,” Andrade recollected.

Andrade said he intervened immediately between Dosev and the volunteers, which prompted Dosev to repeatedly call him a liar.

“That’s when I brought up the dog hoax that he pushed in July,” Andrade added.

The alleged “dog hoax” stems from a July 28 incident, when Dosev found a hot dog “laced with toothpicks” near the front door of his East Hill home.

Dosev posted about the incident on Facebook out of concern for his dog, Maverick. The post was shared 58 times and liked 439 times as of Monday.

Days afterward, he posted an update, explaining that the hot dog was placed by neighborhood kids as a TikTok prank with “no malicious intent.”

While Dosev never pointed fingers, others in the post’s comment section alleged Andrade may be responsible. Andrade said he reached out to Dosev, requesting that he challenge the accusatory comments but his request went unanswered.

“Hey Cris, by now I’m assuming that you know the ‘hotdog’ thing was apparently some kid’s game that I was obviously not involved with,” Andrade told Dosev in a text provided to Florida Politics. “I’d appreciate it if you deleted the post or at least clarified. It would be pretty inappropriate to let your supporters continue to try and accuse me of trying to kill your dog.”

In an interview with Florida Politics, Dosev, a Marine veteran with two sons also in the service, denies that he yelled at Andrade’s volunteers. He also denied any malicious intent in the Facebook post.

“We just wanted to make sure other people didn’t think little pranks like that couldn’t have unintended very, very tragic consequences,” Dosev told Florida Politics. “That’s all it boiled down to.”

Dosev has built his campaign around loyalty to President Donald Trump and his military service. As a bombardier, he served in Iraq and conducted more than 30 missions during Desert Storm. Additionally, he served as a an officer instructor at Northwestern University and Officer Candidate School in Quantico, Virginia.

While Dosev’s military service has not been the subject of political attack, he claims Andrade’s various attack ads have gone too far.

“When non-veterans eviscerate the good character and reputation of soldiers in this community, don’t ever ask me why we have 22 soldiers committing suicide every day,” Dosev said. “People don’t have respect for veterans. When elected officials have so little regard for veterans, we don’t have to look far as to why we have the problems we have today and I directly place that type of blame on politicians that have failed our soldiers in the VA and have failed our soldiers every day.”

The race for House District 2, which encompasses parts of Escambia and Santa Rosa counties, will conclude Tuesday as one of the most contentious races in the state.

The winner of the race will face Pensacola Democrat Dianne Krumel in November, where she faces an uphill battle in a historically right-leaning district.