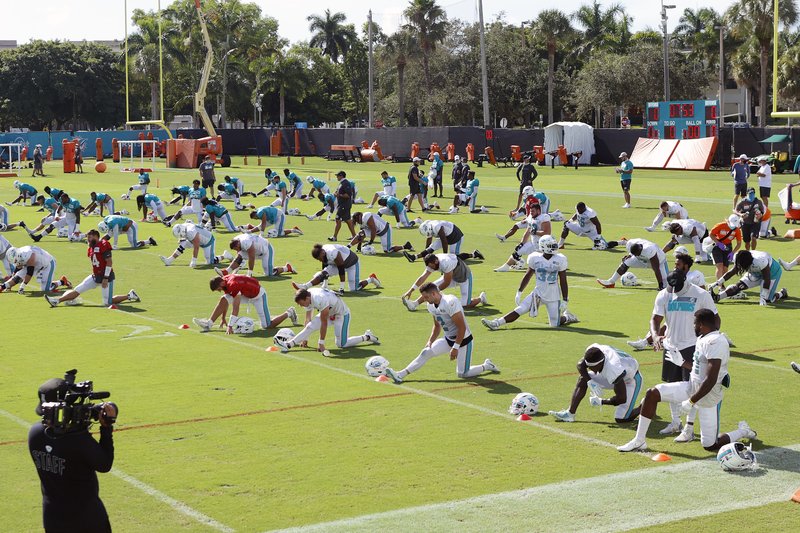 Hard Rock Stadium will have seats for 13,000 fans for the team's home opener.

Gov. Ron DeSantis is backing the Miami Dolphins’ plan to allow fans at the teams’ first home game of the 2020 season.

When the Dolphins host the Buffalo Bills on Sept. 20, Hard Rock Stadium will have seats for 13,000 fans as officials continue aspirations to bring society back to normal. That’s less than 20% fan capacity, but 13,000 more than what teams in the other three major professional sports have allowed amid the COVID-19 pandemic.

“When you watch the NBA with an empty arena or Major League Baseball with an empty stadium, it’s just not quite the same,” DeSantis said. “And I know this isn’t going to be people falling from the rafters here, but I think it is something that will give people a little bit of hope.”

Dolphins Vice Chairman and CEO Tom Garfinkel said the team is developing new ways to maintain social distancing. Those include “touchless” metal detectors that allow fans to enter without removing phones or keys from their pockets, food ordering apps, limiting tailgating and ending alcohol sales at the start of the second half.

“If you are someone that doesn’t want to wear a mask, this isn’t the place for you this year,” Garfinkel said. “Don’t buy a ticket. Don’t come.”

The Dolphins — and the Jacksonville Jaguars — are among the handful of teams that will host fans at their home openers. Others, including the Tampa Bay Buccaneers, haven’t finalized plans to allow fans in stands.

Several teams describe their current situation as “fluid.” And even the Dolphins’ plans are fluid, Garfinkel suggested, dependent on outbreaks in the state.

“If they get a lot worse, it’s very conceivable we could have a situation later in the year where we don’t have fans at a game,” he said. “If they get markedly better, it’s possible we could move to half capacity.”

South Florida has been the state’s largest COVID-19 hotspot. A quarter of Florida’s 602,829 cases came from Miami-Dade County.

But DeSantis said last week the three South Florida counties were on the verge of joining the rest of the state in the second phase of reopening because of downward trends in the rates of positive tests for the coronavirus.

While he again stressed positive trends Monday about tests results, hospitalizations and infections among long-term care staff members, DeSantis didn’t mention moving the three counties into the next phase of reopening.

COVID-19 outbreaks subsided in May and favorable trends are returning this month. But during the pandemic’s summer resurgence across the Sunbelt, DeSantis blamed lax social distancing practices — and protesters and the media — for the resurgence.

In May, DeSantis publicly pitched sports teams to host their games in Florida. And this month, he’s pushed for college sports to restart.

The National Basketball Association and Major League Soccer have hosted their season reboots at the ESPN Wide World of Sports Complex outside of Orlando. But while those leagues are playing games in bubbles to limit outbreaks, the National Football League is taking Major League Baseball’s bubbleless route.

However, the MLB season hasn’t been smooth sailing. After the season’s first weekend, the Miami Marlins were the first team to experience an outbreak.

But as MLB is struggling to maintain its image even without fans, DeSantis pointed to Walt Disney World as evidence the Dolphins could sell some tickets. Taking the proper health precautions would allow society to continue reopening without sparking major outbreaks, he said, calling the Dolphins’ plan “limited” and “thorough.”

“To just say no, we’re not going to do anything, I don’t think that that’s a viable pathway for the state going forward,” he added.

A Buccaneers spokeswoman said Monday no decisions have been made regarding fans at Raymond James Stadium.

U.S. Rep. Donna Shalala, a Miami Democrat, was among a number of Democrats who quickly questioned the wisdom of bringing fans into Hard Rock Stadium.

“It is difficult to open anything in a pandemic, much less a stadium for live sporting events, when you have community spread,” Shalala, a former secretary of the U.S. Department of Health and Human Services and president of the University of Miami, tweeted. “We’ll continue seeing inconsistent progress fighting this virus if we again loosen restrictions immediately just as cases are starting to go down.”

“It is too soon to have thousands of fans attend football games,” she tweeted. “Other @nfl teams across the nation are holding their first games without fans. We should be extra cautious given that over 5,000 Floridians have died in the last month from #COVID19.”

Local and team officials said the plan will only succeed if fans abide by new health protocols.

“They’ve done the best they can in providing an environment that can make it as safe as possible,” Miami Gardens Mayor Oliver Gilbert said. “Now we’re going to see how the community behaves. Whether we do our best. Whether we can come to a game and be compliant and not be aggressively non-compliant. This idea that you don’t want to wear a mask, and no one can tell you whether you wear a mask, if that’s your idea, please, that idea is not welcome in this city and is not welcomed in the stadium.”

nextTo-go drinks an elixir for public, a lifeline for business