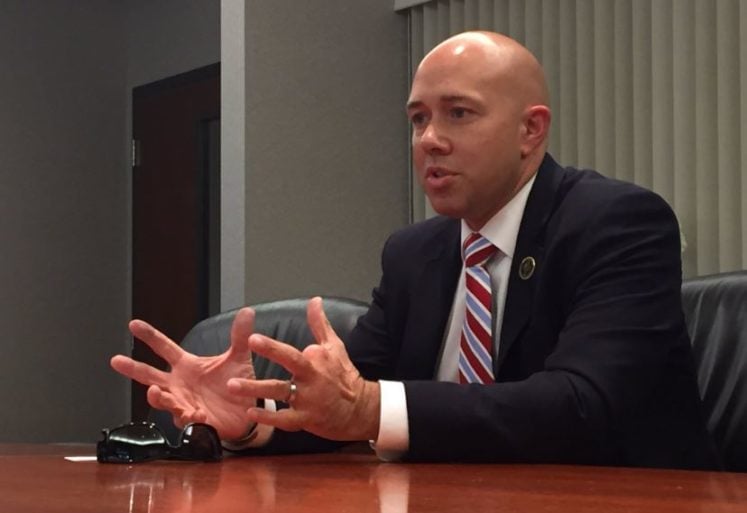 Republican Rep. Brian Mast is apologizing for what he called “disgusting and inappropriate jokes” about sex with 15-year-olds and rape in newly-uncovered Facebook posts.

The postings were first reported by Skyler Swisher of the South Florida Sun-Sentinel.

The controversial comments were made in 2009 and 2011 in response to posts by Rocco LeDonni, a long-time Mast friend who now serves as his campaign manager.

In the 2009 post, LeDonni uploaded a picture of him at a bar during a trip to South Africa. In a comment on Ledonni’s photo, Mast wrote, “im so proud of you… i hope you hook up with at least fifteen 15 year olds over there…. its legel there right.”

In 2011, LeDonni posted this question: “Anyone have any good pick up lines for this weekend considering according to the crazy christian radio guy the world may end on sunday?”

That prompted Mast to reply, “How about don’t turn this rape into a murder.”

Mast has held the seat in Florida’s 18th Congressional District since winning the 2016 contest. In response to questioning from the Sun-Sentinel about the posts, Mast apologized.

While Mast referenced his 2010 injury, when he lost both of his legs after an IED explosion, the first post came in 2009, prior to that injury.

Mast has tried to make Keith’s hyper-charged social media persona an issue in the campaign. Just last week, Mast released an ad highlighting Keith’s reaction to accusations Biden had committed sexual assault. In response, Keith wrote on Twitter that Biden “still has LOTS of rape to do to catch up to [Donald] Trump.”

Keith was making the point that Trump has been accused of forcible assault multiple times. She also said of the allegations against Biden, “I highly doubt that’s true.” She eventually deleted the post.

“This is disgusting, unacceptable and dishonorable behavior for any man, let alone a sitting member of Congress,” Keith said.

“Congressman Mast’s flippant and cavalier attitude towards rape and sexual violence has no place in the halls of Congress,” Bustos said.

previous‘Fighting for you’: First Lady makes her case for Trump vote