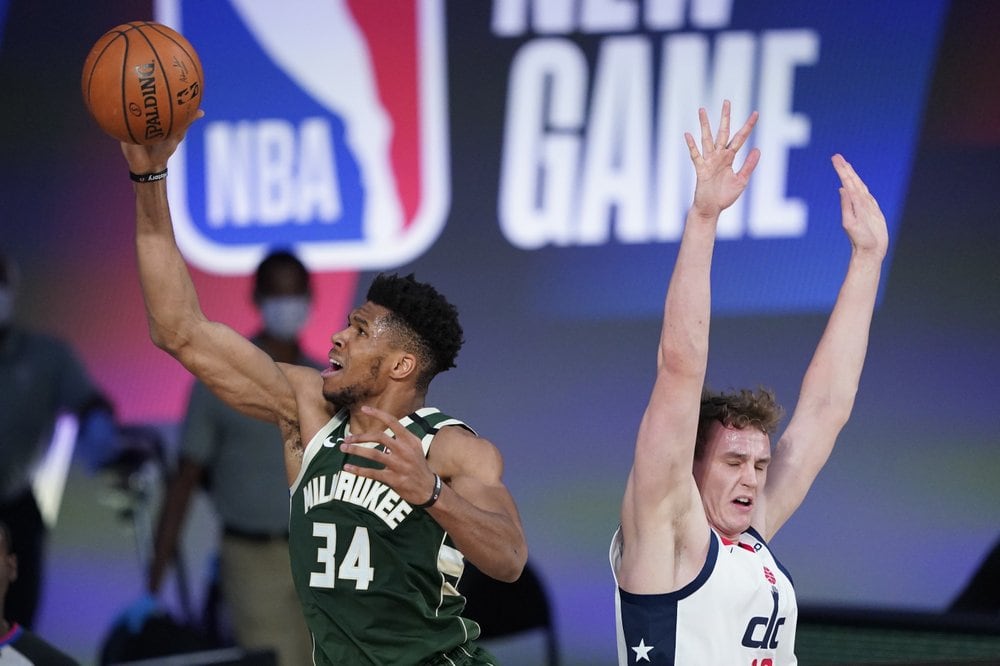 Players have been protesting the police shooting in Kenosha.

Another day of the NBA playoffs will be postponed, a person with knowledge of the details told The Associated Press on Thursday.

The three games will join the three that weren’t played Wednesday, the person told the AP on condition of anonymity because no official announcement had been made.

Play was set to resume at 4 p.m. with Game 6 of the Western Conference series between Utah and Denver. Boston and Toronto were also to begin their second-round series before the Clippers and Dallas met in the nightcap.

A person with knowledge of the situation earlier had said that NBA players decided Thursday that they want to continue the season, coming to that consensus one day after three postseason games were postponed in a protest of racial injustice.

It was not clear yet when the season would resume, according to the person who spoke to The Associated Press on condition of anonymity because neither the league nor the National Basketball Players Association had announced anything publicly.

The NBA’s board of governors were meeting separately Thursday to decide next steps. There were three games on Thursday’s schedule, and the league did not immediately say if they would be pushed back. But with the players exiting their meeting around noon, and the first game of the tripleheader scheduled to begin at 4 p.m. Eastern, it seemed most unlikely that the day’s slate would not be disrupted.

One potential remedy for the schedule, the person said, was to play the three games that were postponed Wednesday on Friday, and the three games scheduled for Thursday on Saturday, though that had not been decided.

Starting with the Milwaukee Bucks, who refused to take the court for their game Wednesday against the Orlando Magic, players from six teams made the extraordinary decisions to protest the shooting by police in Kenosha, Wisconsin on Sunday of Jacob Blake, a Black man, apparently in the back while three of his children looked on.

Kenosha is about 40 miles south of Milwaukee.

NBA players didn’t come to Disney solely for a restart to their season. They also wanted social reform, as did other sports leagues — many of which followed the NBA’s lead Wednesday by calling off games. Some NFL teams did the same Thursday, choosing not to practice.

It followed a similar pattern as what happened in March: The NBA was the first league to shut down because of the coronavirus pandemic, and other sports followed then as well.

“The biggest thing that we all understand is if we’re not playing, what are we doing? What are we doing to show and to help what’s going on outside this bubble?” Boston Celtics forward Grant Williams said, shortly before the Bucks were scheduled to tip off their game against the Magic.

Instead, the Bucks players remained in the locker room, finally emerging hours later to read a statement demanding action from lawmakers and encouraging voting by citizens.

They changed the narrative across the entire sports landscape, putting the focus squarely on social justice reform in protest of the shooting of Blake.

While players and teams from baseball, the WNBA and MLS sat out their competitions Wednesday night, NBA players and coaches met for nearly three hours in a Disney hotel to determine next steps, including whether the season should continue. They did not come to a consensus, a person with knowledge of the meeting told AP on condition of anonymity because details weren’t revealed publicly.

More talks took place in the early hours of Thursday, followed by the player meeting that morning to decide to continue the season.

The Western & Southern Open won’t be played Thursday, with the U.S. Tennis Association, along with the ATP and WTA Tours, announcing play would be paused after two-time Grand Slam women’s champion Naomi Osaka had already said she wouldn’t play her semifinal match.

“I don’t expect anything drastic to happen with me not playing, but if I can get a conversation started in a majority white sport I consider that a step in the right direction,” Osaka tweeted. “Watching the continued genocide of Black people at the hand of the police is honestly making me sick to my stomach.”

Before coming to Disney, many NBA players wrestled for weeks about whether it was even right to play, fearing that a return to games would take attention off the deaths of, among others, Breonna Taylor and George Floyd in recent months.

They ultimately decided coming to the bubble and playing televised games would give them the largest platform, though now at least some are wondering if that’s still true.

It appears now they will find out if that’s the case.