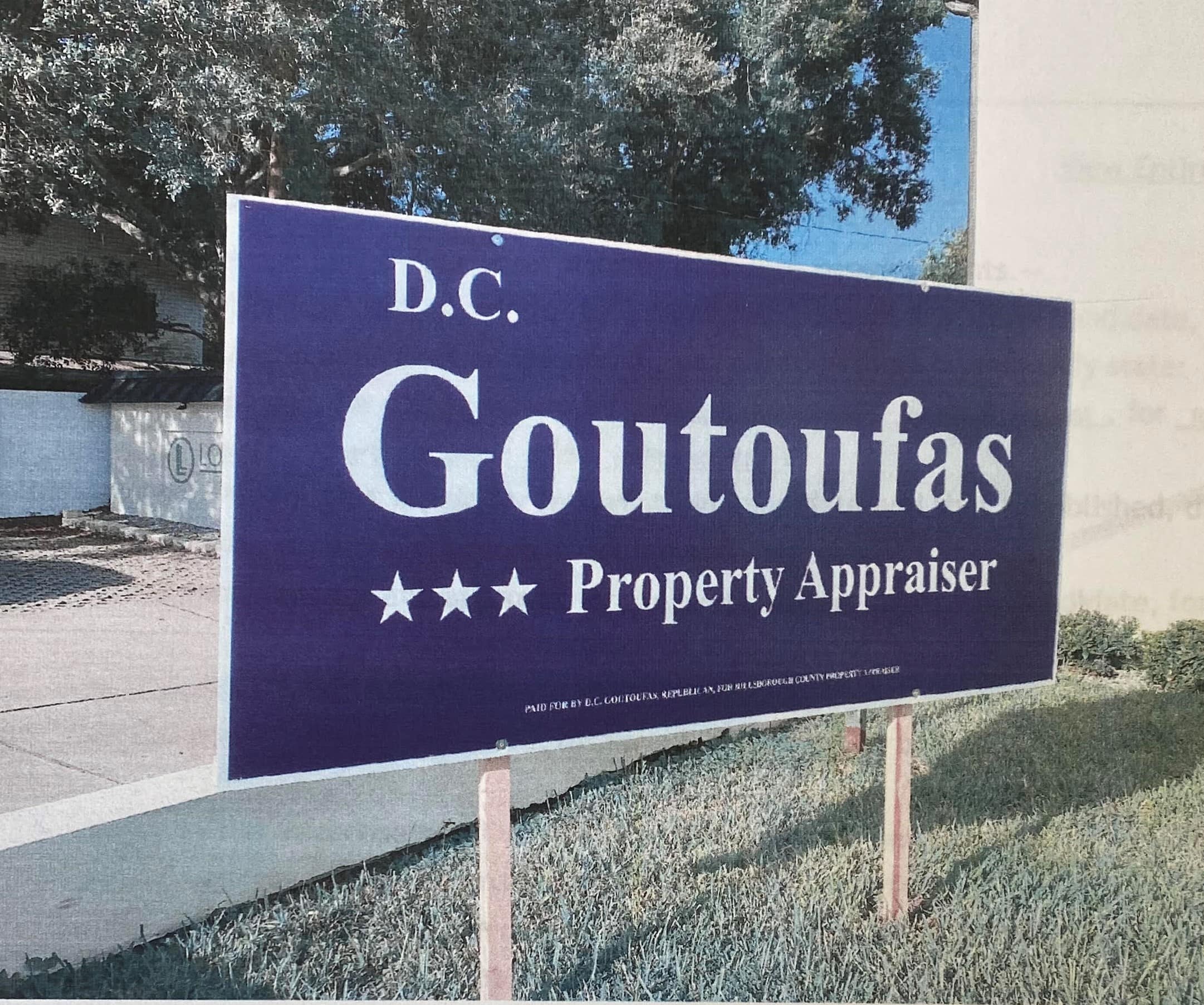 The last two Hillsborough County Property Appraiser’s races haven’t had much drama, and this one seemed headed in the same direction. But things got at least a little spicy after Nereia Cormier drove along Lois Avenue in Tampa recently and noticed something amiss.

“Having a former campaign eye, I noticed the sign didn’t have a ‘for’ on it,” she said. “He’s not the incumbent, so by state law, his signs have to say he’s running ‘for’ the office. I couldn’t unsee that.”

So, Cormier, who is no longer associated with the Henriquez campaign, filed a complaint with the Florida Elections Commission. She alleges Goutoufas violated state law that says non-incumbent candidates “must include the word ‘for’ between the candidate’s name and the office for which the candidate is running, in order that incumbency is not implied.”

In her filing, Cormier called Goutoufas’ signs a “clear violation of this statute.”

Henriquez said, “My opponent has unethically represented himself” and called for Goutoufas to remove the signs.

“He needs to fix this,” Henriquez said. “Do the right thing, not just what you can get away with. Follow the law. I am the Property Appraiser and I’m a stickler for doing the right thing.

“Those signs are illegal. They need to come down. They imply incumbency and a skill set he doesn’t have.”

Tim Northcutt, the Goutoufas campaign manager, said the signs are legal. He focused on small print at the bottom of the main image. It reads: Paid for by D.C. Goutoufas Republican candidate for Hillsborough County Property Appraiser.

“Maybe it’s in small print, but it’s on the sign,” Northcutt said. “If they want to come to us on that issue, I’m happy to have that.”

A check of the Facebook page supporting Goutoufas showed a lot of signs.

Goutoufas has no known background in property appraising.

He originally intended to run for Hillsborough’s Clerk of the Circuit Court but switched gears to oppose Henriquez shortly before the filing deadline.

Judging by history, Goutoufas has an uphill climb,

It’s questionable whether the Commission in Tallahassee will act on the complaint before the Nov. 3 election. That didn’t matter to Cormier, though, because rules are rules.

“I think it’s very important, especially these days, to make sure the information out there is accurate,” she said. “That’s why I did this.”