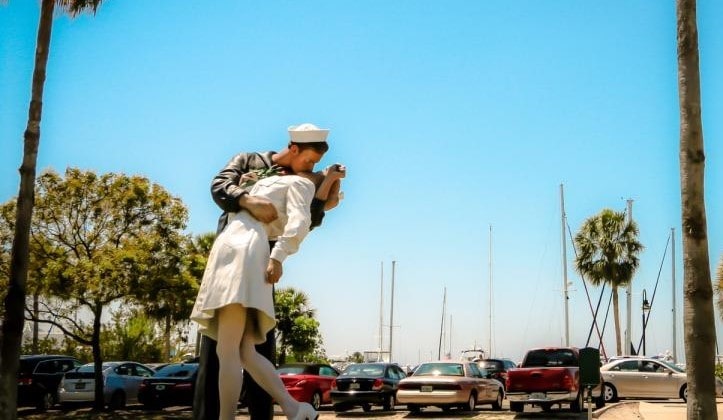 Statue has been decried by #MeToo movement, but celebrated by veterans.

The fate of a kitschy kissing sailor statue has long divided Sarasota’s high-minded cultural crowd and the patriotic veteran set.

Now U.S. Rep. Vern Buchanan has weighed in on the matter. He wants Seward Johnson’s Unconditional Surrender statue to remain at its current location on U.S. 41 near Downtown. He wrote a letter to Sarasota City Commissioners on House letter head defending the monument.

“The ‘Unconditional Surrender’ statue is extremely meaningful to Sarasota’s veteran community and honors their sacrifice for our country,” Buchanan wrote. “This statue commemorates a significant moment in our nation’s history that we shouldn’t erase from the Sarasota Bayfront.”

The sculpture recreates a sailor at the end of World War II kissing a woman he grabbed in Times Square upon news Japan had surrendered. It’s a moment famously captured in the Alfred Eisenstaedt photograph V-J Day in Times Square and featured in Life Magazine in 1945.

That moment, though, has seen a recent historical reexamination of sorts in the wake of the #MeToo movement. Last year, someone anonymously painted the famous hashtag on the woman’s leg. Political criticism has increased in recent years as Greta Friedman, the woman believed to have been in the original photographed incident, revealed she was grabbed by drunken sailor she did not know, and did not come forward to reveal her identity fearful it might upset her husband she kissed another man in the famous image.

The statue was originally displayed in Sarasota as part of the Season of Sculpture more than a decade ago. Even then, the sculpture prompted protests, with local sculptors like Dennis Kowal draping their own exhibited work at the event rather than let it be displayed alongside a work derided as derivative and kitsch.

A decade ago, army veteran Jack Curran purchased the statue and loaned it to the city on the condition it stay at the Sarasota Bayfront, in view of his condominium, for at least 10 years. In that time, it’s been hit by a vehicle at least once.

Artists have criticized the fact the work draws heavily from the Eisenstaedt image, though Johnson, in his lifetime, always contended the sculpture in fact was based on a similar photo shot by military photographer Victor Jorgenson and therefore part of the public domain.

The statue is also one of several similar works that have been displayed throughout the country. A near-identical work, renamed “Embracing Peace,” was installed in Key West in 2017. A smaller version has appeared in Times Square, where the original kiss took place, and a version of the statue stands in San Diego.

The piece has long attracted tourists in Sarasota, with many a couple stopping near the busy intersection to recreate the kiss in front of the work.

And veterans have long pointed to the piece as a popular World War II monument, though a more serene memorial to veterans can be found in a park a short distance away.

With the expiration of the loan, Sarasota’s Public Art Committee, which recommended rejecting the loan in the first place, recommended the statue now find a new home.

The statue at least temporarily will have to be move to accommodate construction of a roundabout on U.S. 41, said city spokesperson Jason Bartolone.  The commission must decide what do with it in the interim and where it’s final standing place will be.

City Commissioners this month will consider whether to relocate the work or leave it in place. This week, digital photo renderings were released and published in the Sarasota Herald-Tribune showing how the statue may look in other locations within the Sarasota community.

But Buchanan said it’s clear the majority of his constituents like the work where it stands now.

“I have spoken with many veterans about the importance of the statue, as well as many others who enjoy seeing it every time they drive by,” he wrote. ”They do not want the statue moved or relegated to some hidden location where few will ever see it. My online survey of area residents showed more than 80% supported keeping it right where it is — and I agree with them.”