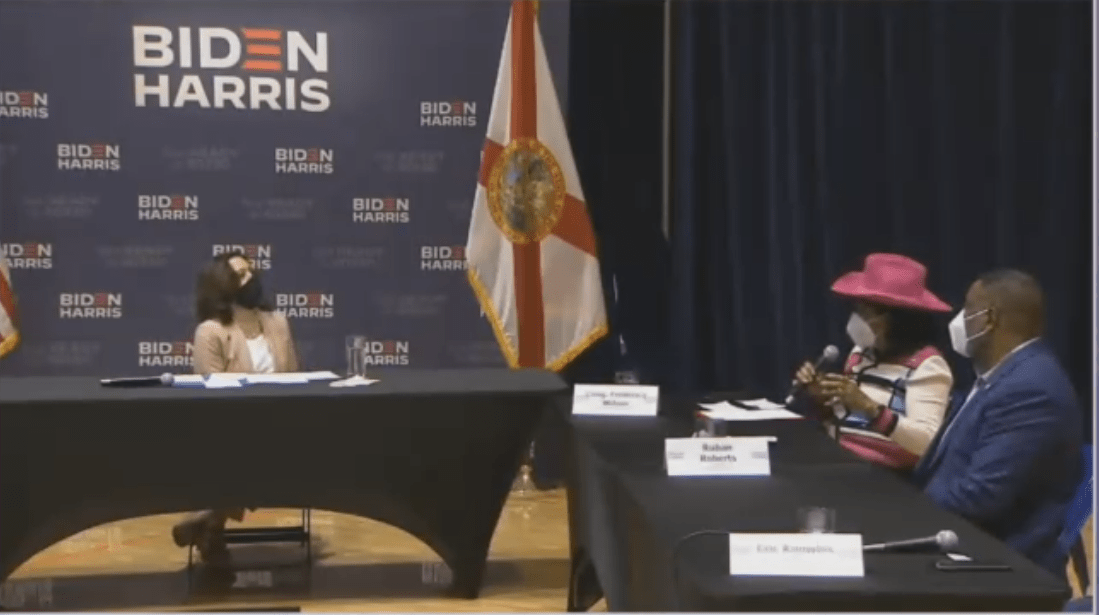 With polling indicating softening support for the Democratic ticket in Miami-Dade county, Joe Biden‘s vice presidential nominee made a Sunshine State swing to correct that issue, but not without addressing the news of the day.

While in Miami Gardens at Florida Memorial University, Sen. Kamala Harris hammered President Donald Trump for having known the dangers of COVID-19, as reported this week by Bob Woodward.

The President said he “downplayed” the virus, in comments widely reported that have created a firestorm.

Despite knowing the virus risks, Trump pushed forward anyway with statements and postures that undermined the health and safety of Americans, creating a crisis that could have been averted, Harris said.

“What we are hearing is that on Jan. 28 the President and Vice President were informed about the evidence and dangers of COVID-19,” Harris said.

“On Feb.7, the President of the United States was in a conversation where he said that COVID was deadly stuff,” Harris added, noting that Trump was “the same man who for days, weeks, if not months thereafter called it a hoax, dismissed the seriousness of it.”

Trump advised against wearing masks, Harris noted, despite the fact “he knew it was airborne, that people would breathe it.

“He knew the facts of it,” Harris said, including the “5% potential fatality” rate.

“In January and February, he had all this information,” Harris added, “yet he had rallies” where he “said wearing a mask was a sign of weakness.”

The President, Harris added, is “an individual who is not concerned about the health or safety of the American people.”

Harris noted that this “pandemic,” one “that resulted in economic disaster comparable to the Great Depression,” happened even as the “Commander-in-Chief was in possession of that information but conducted himself the way he did.”

Harris’ comments were at the beginning of a roundtable event focused on Black issues with U.S. Rep. Frederica Wilson and people from throughout the region voicing concerns about everything from student loan forgiveness to social justice.

The virus comments, topical nationally because of the Woodward hook, were relevant both to the Sunshine State and particularly South Florida.

In that region, the COVID-19 crisis has been more pronounced than anywhere else in the state. Minority communities have borne a disproportionate share of the localized burden.

Rep. Wilson described her district as the “epicenter” of the pandemic, while making the emphatic case for the Biden/Harris ticket, one with which she had a personal connection and a bit of premonition.

Wilson related conversations at Congressional Black Caucus meetings with Harris, her sorority sister, years before the Senator called Wilson to let her know she was running for President.

“I was so excited I didn’t let her finish her statement,” Wilson said.

Even when Joe Biden texted her almost at the same time, Wilson responded of he and Harris, “Maybe one day the two of you will end up somewhere together.”

And so it came to pass.

For Emhoff and Harris both, this is the second Florida foray in recent weeks, demonstrating the importance of the battleground state to the Biden camp’s calculus.

The Trump campaign offered a statement about the event writ large, not addressing the pandemic discussion.

“By delivering permanent annual funding for HBCU’s like Florida Memorial University, over 420 Floridian opportunity zones, criminal justice reform, and record-low unemployment before the pandemic, President Trump has kept his promises to the Black community. In stark contrast, Joe Biden and Kamala Harris have a combined record of 66 years in government and have little to show for it,” asserted Trump Victory Spokesperson Emma Vaughn.