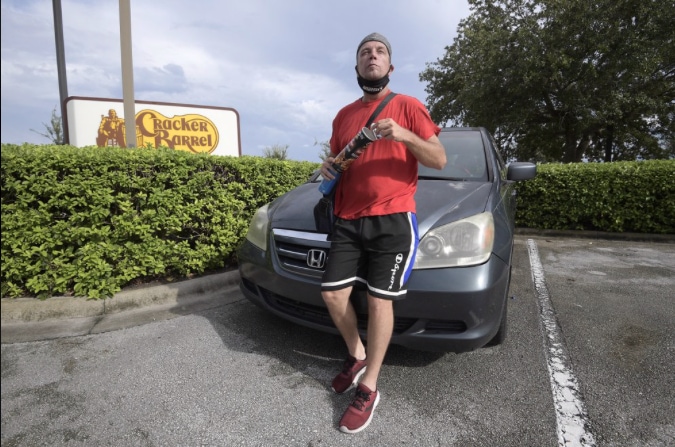 “I don’t understand what I did wrong. Why me?” Jeff Lello said.

Jeff Lello has never been rich, but the 42-year-old could pocket $100 cash most weekend nights at the steakhouse chain where he waited tables. He always had enough money for groceries, his car and the modest Orlando apartment he rented with roommates.

But when he reported for work on a Friday night in March, the manager ushered him and the rest of the staff into an office and told them they were laid off indefinitely as the restaurant, along with much of the country, shut down amid the coronavirus pandemic.

Still wearing his uniform, Lello left the restaurant where he’d worked for two years, unsure of what was next. He’d been waiting tables since he was a teenager. He often picked up extra shifts and could always scrimp by. He’d never had to rely on food stamps or unemployment.

But now, as he waited for Florida’s backlogged unemployment system to send money, weeks turned into months. His meager savings dried up, and he could no longer afford rent or his car. Overnight, he went from having a roof over his head to living in a flimsy tent purchased with his last $75.

Lello is one of an estimated 20 million Americans living paycheck to paycheck, spending more than 30% of their income on rent, who are likely to experience homelessness at some point, according to the National Coalition for the Homeless. The group predicts that number could increase by 45% because of the pandemic.

As the virus outbreak pushed unemployment rates to record numbers, Florida’s situation was especially dire. The Sunshine State was one of the slowest in the nation to process claims, delaying payments for months for Lello and others. By mid-June, the state hadn’t paid 40% of is 2.2 million claims.

“I don’t understand what I did wrong. Why me?” Lello said of the safety nets that failed him. “I had just lost all hope in everything.”

He’d never been much of a camper, but he pitched his yellow-and-blue tent deep in the woods. He feared bugs and spiders, and other homeless campers. Inside, he had a cot with a sleeping bag, and a shelf for food and belongings. One corner was for clean clothes, the other for dirty. He threw a tarp over the top to protect against rain.

Lello thrives on routine — he’d lost 150 pounds in the past year, running daily to clear his head. He was eager to maintain hard-fought gains.

Most days, he was awake by 7 a.m. , searching for a convenience-store bathroom to freshen up and wash a shirt. He’d head to the food bank and haul away a big brown bag of pasta, sauce and other things that require pots, pans and electricity. He gave most of it away, keeping peanut butter and granola bars — enough to get by for a day.

He made rookie mistakes. Once, raccoons tore through his supply of bars, bagels and crackers. He learned it’s best to be first in the food-bank line, and it’s usually too hot to be in a tent before nightfall.

He spent much of the day begging for money, food or odd jobs on the roadside.

“6 weeks with no help. Please,” his sign read. Each week, as he waited for long-overdue unemployment checks, he scrawled a new number, until it’d been nearly 12 weeks. Most people didn’t stop: “I think the most I ever got was one dollar and a bag of oranges.”

Begging wasn’t the hardest part, he said. It was the human interaction — coming so close, yet so far from meaningful contact.

Cars full of friends and families talking and laughing whizzed by. He said he thought of his father, who killed himself years ago, and his mother and sister, from whom he’s estranged.

He spent the day’s hottest hours in the library, charging his phone and applying for jobs. He checked his unemployment-funds status — calling, hanging up and dialing back for hours. His stimulus check and tax refund were also stuck in red tape, he said.

Although he was living the headlines — unemployment backlogs, record jobless claims, relief-fund debates — he felt invisible.

Summer stretched on without a check. He’d struggled for years with manic depression and was getting counseling from a free clinic, but that, too, shuttered.

Running — when he could manage, given his meager diet — became a lifeline. Each sweat-drenched session felt like a rebirth, something to be proud of.

At night, he screamed into his pillow or bit his cot to soothe his nerves. Thoughts of suicide haunted him.

“In the morning I’m working on being positive and building up my body and, at night, I want to destroy myself because there wasn’t any hope,” he said.

His closest friend, Amanda, visited a few times. Sometimes, her family let him shower at their home and have a meal. Once, she arrived with a small bag of change she said was her last, he said.

Near the end of July, Amanda called. He’d forwarded his mail there. The unemployment check had arrived, with his back pay: $4,800.

He took her to breakfast at Denny’s, filling up on plates of eggs, bacon, pancakes, sausage. “When you’re homeless,” he said, “the hardest thing is to get something hot.”

The steakhouse reopened, with a skeleton crew for takeout, and offered him two weekly shifts — not enough to live on, but a start.

He bought a van with air conditioning, a roof, doors, an alarm. The DMV isn’t taking new appointments, and he can’t drive it until it’s registered. But he can sleep there, and soon, he hopes, get food-delivery work.

Lello is more hopeful now, but cautiously so. His loner instincts are hard to shake. When he needed help most, so many turned their backs — the restaurant, the government, most of his friends.

“It makes me just want to find a way of not depending on anyone ever again,” he said. “When the hard times come, there’s not going to be anyone there.”