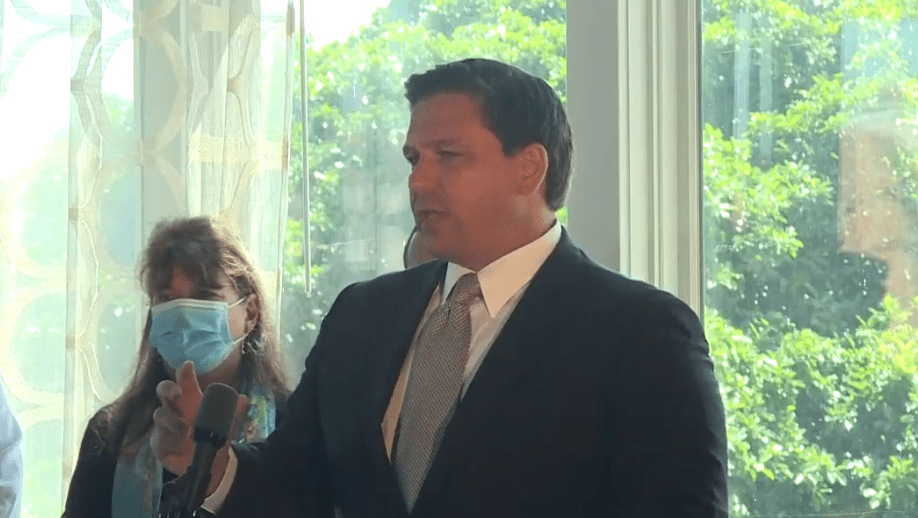 Addressing reporters Friday in St. Petersburg, the Governor urged NFL stadiums to move toward filling their seats as the season progresses.

“I think they can still do that. I know there’s some issues about insurance and some other things, and I respect that. Maybe we’ll be able to address that after the election,” DeSantis said, regarding protections from virus liability suits that could be hammered out in a Special Session.

The Governor focused specifically on the Tampa Bay Buccaneers for the second time in 22 days, focusing on near-term and long-term considerations.

In the near term, DeSantis cajoled, “everyone wants to watch Tom Brady and Gronk and all these great players.”

But in the long term, Tampa and other teams need to demonstrate their ability to host fans ahead of the Super Bowl at Raymond James Stadium in February 2021.

“I’d like to see everyone have fans at some capacity and let’s build going forward,” DeSantis said, noting that the sticking point hasn’t been a “question of government,” but one of “what the leagues have been comfortable with.”

“I fully understand, and we will work with them, they want to go slower more than anyone, so it’s not like they want to have full capacity,” DeSantis added. “But I think you can do much more than what’s been done.”

The Governor contends that “outdoor transmission has just not been a major factor” in the spread of COVID-19, but understands the caution.

“I very much support the Bucs having fans. I think what the Dolphins did to start off, I think was really great,” DeSantis said, before addressing the state’s third NFL franchise, which has problems of its own.

“The Jags, they’re allowing fans. They couldn’t even sell out limited capacity, I think, partially, because some of the fans are concerned about some of the things we’ve been seeing out of the league,” DeSantis said.

He did not elaborate on what those things were.

Citing performers’ “right to work,” the Governor also said he wants the return of live music, a potential boost to a sector crippled by virus shutdowns.

Musicians “should be able to play, particularly in these outdoor venues.”

“I’ve had some folks ask me about certain restrictions,” DeSantis said. “There’s certainly no legal prohibition from them doing fans.”