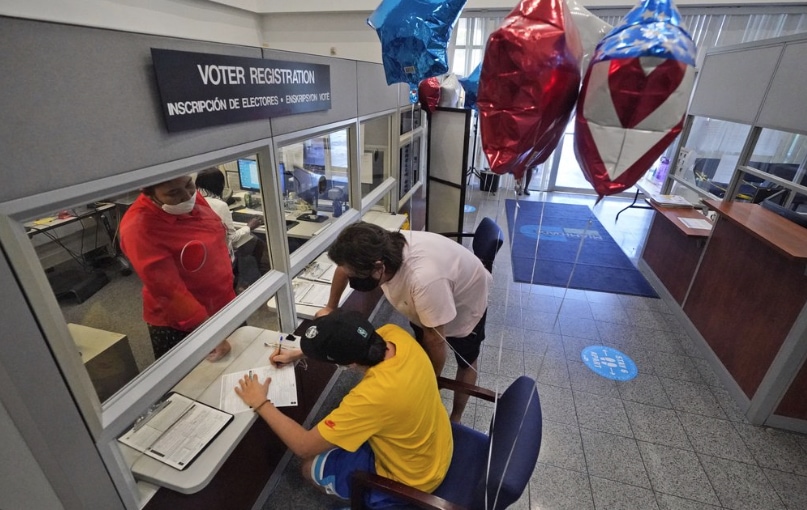 Florida’s chief information officer said Wednesday that misconfigured computer servers were to blame for the crash of the state’s voter registration system as the deadline approached for enrolling to cast ballots in next month’s presidential election.

James Grant told The Associated Press in an interview that the voter registration system worked as expected during that extra time after technicians reconfigured existing servers, expanding the network’s capacity and giving the system a “whole lot more horsepower.”

He said it is unknown how many people were prevented from registering to vote during Monday’s bottleneck.

There also is a rising theory, reported Wednesday by the Sun Sentinel of South Florida, that pop superstar Ariana Grande’s fans might have overwhelmed the site after she encouraged them by Twitter to register Monday.

Grande tweeted a message about 3 p.m. Monday encouraging her fellow Floridians to register to vote. She has more than 77 million Twitter followers, and her tweet was subsequently retweeted nearly 7,000 times, the Sun Sentinel reported.

A barrage of heavy traffic hit the state’s website in the hours leading up to the 11:59 p.m. deadline on Monday, spiking at 1.1 million requests per hour, the Fort Lauderdale-based newspaper reported on its website.

Grant said no one had any intention of preventing people from registering to vote, but he acknowledged that the system failed on a critical day.

“The servers were configured in a way that reduced its capacity to a fraction of a fraction of what it was capable of,” Grant said.

Secretary of State Laurel Lee issued a statement late Tuesday saying it does not appear that bad actors caused Monday’s collapse of registration system. Lee said the system overloaded when more than a million attempts to register came in by the hour.

Cyber security experts have said that an intentional attack aimed at crippling the system would have involved millions of attempts per second.

The potential for outside meddling is an especially sensitive issue in Florida, a key battleground in November’s election between President Donald Trump and his Democratic challenger, former Vice President Joe Biden. The state has lingering questions about Russian hacking during the election four years ago.

“We have not identified any evidence of interference or malicious activity impacting the site,” Lee said.

The statewide voter registration system, which serves Florida’s 67 counties, went online in October 2017. There have been some problems before, but nothing like Monday’s meltdown.

Several voting and minority rights groups filed a federal lawsuit against the state, saying DeSantis’ extension was insufficient. They argue that at least two more days are needed to allow for people to be informed of the extension and to act on it.

U.S. District Chief Judge Mark Walker in Tallahassee rejected the groups’ request for an immediate extension late Tuesday, but said he would consider their demand after a hearing on Thursday. The groups include Dream Defenders, New Florida Majority, Organize Florida, LatinoJustice PRLDEF and others.

They argue that the rights of those who tried to register Monday were violated because they did not have the same access to the system as those who registered earlier. DeSantis said Tuesday that his extension equaled the time the system experienced problems and was sufficient.