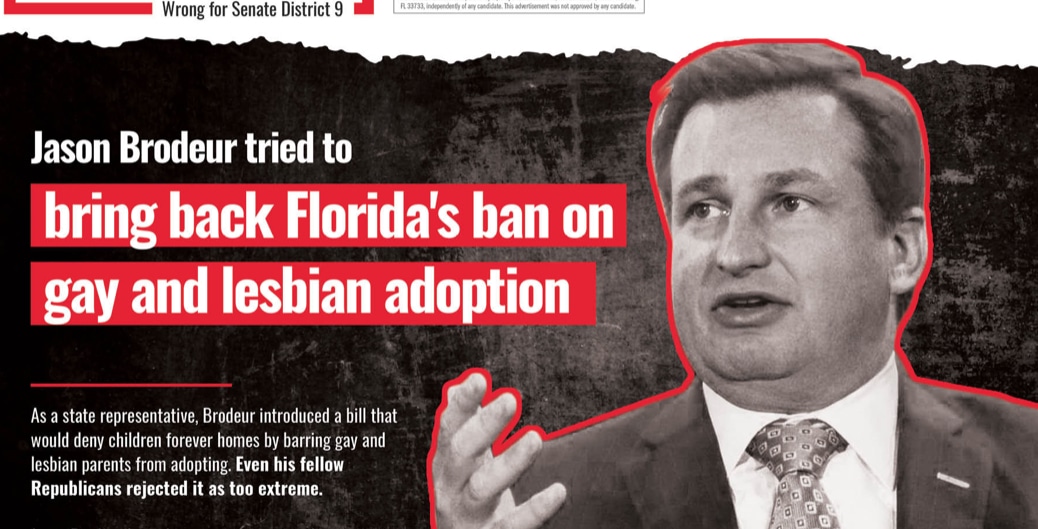 The state’s biggest advocacy organization for LGBTQ rights is spending $125,000 to blast Republican former Rep. Jason Brodeur for his record on gay rights, specifically regarding gay and lesbian couple adoptions.

Equality Florida Action, the political action committee for Equality Florida, announced Thursday it is campaigning against Brodeur in his bid to be elected to the open seat in Senate District 9. Brodeur faces Democrat Patricia Sigman in one of the hottest-contested Senate races in the state, representing Seminole County and southern Volusia County.

“Jason Brodeur is so extreme he wants to allow adoption agencies to discriminate against gay and lesbian families,” a narrator declares in both ads.

The mailer and the social media ads enthusiastically endorse Sigman.

The organization said the effort is the largest it has ever made in a race.

The top concern for Equality Florida was Brodeur’s sponsorship in the House in 2015 of HB 7111. It essentially sought to allow private adoption agencies to refuse to place children with same-sex couples. That bill died, but positioned Brodeur as someone Equality Florida and other LGBTQ rights advocates saw as an adversary to gay rights.

Brodeur, who was himself adopted, contended he also wanted to avoid the prospect of major adoption agencies, such as Catholic Charities, withdrawing from participating in private adoptions in Florida. He said there was a concern they could face litigation that could discourage them from facilitating adoptions.

Equality Florida and other LGBTQ advocates see the move as offering state permission for discrimination and as trying to reduce rights won in court in 2010.

“Jason Broduer’s adoption discrimination bill was blatant discrimination that targeted gay and lesbian families because of who they are. It put his own prejudices above what’s best for a family and a child,” charged Margot Logan, an adoption agency professional who lives in Oviedo and is also featured in one of the digital ads.

“Brodeur’s ban on LGBTQ adoptions is not just doing harm to our community by openly discriminating against us, it’s also harming the children who need a forever home,” Tatiana Quiroga and Jennifer West, residents of Longwood and mothers of 4 and 8-year-old boys who are featured in one of the ads, stated in a news release.

Brodeur brought renewed rage to LGBTQ rights advocates when he told Florida Politics in late August that he was taking credit for legalizing gay adoptions in Florida. In 2015 he pushed through HB 7013, which put into state statute the legalization of adoptions by same-sex couples in Florida. That right already had been established in court, so advocates argued the bill was meaningless except as an attempt to create a political distraction from HB 7111, which was active at the same time.

“Not only did Jason Brodeur try to bring back Florida’s ban on gay and lesbian adoptions, now he’s trying to rewrite history,” Joe Saunders, senior political director for Equality Florida and a fellow former state Representative, said in the news release. “But Jason Brodeur can’t reinvent his record for an election.”

Equality Florida noted that for more than 30 years, Florida was the only state in the country with laws banning adoption by gay and lesbian parents. In 2010, state courts overturned the ban on constitutional grounds. Polls of Florida voters show 79% support same-sex couples having the same adoption rights as opposite-sex couples, and support nondiscrimination protections for the LGBTQ community by 68%, the organization states.