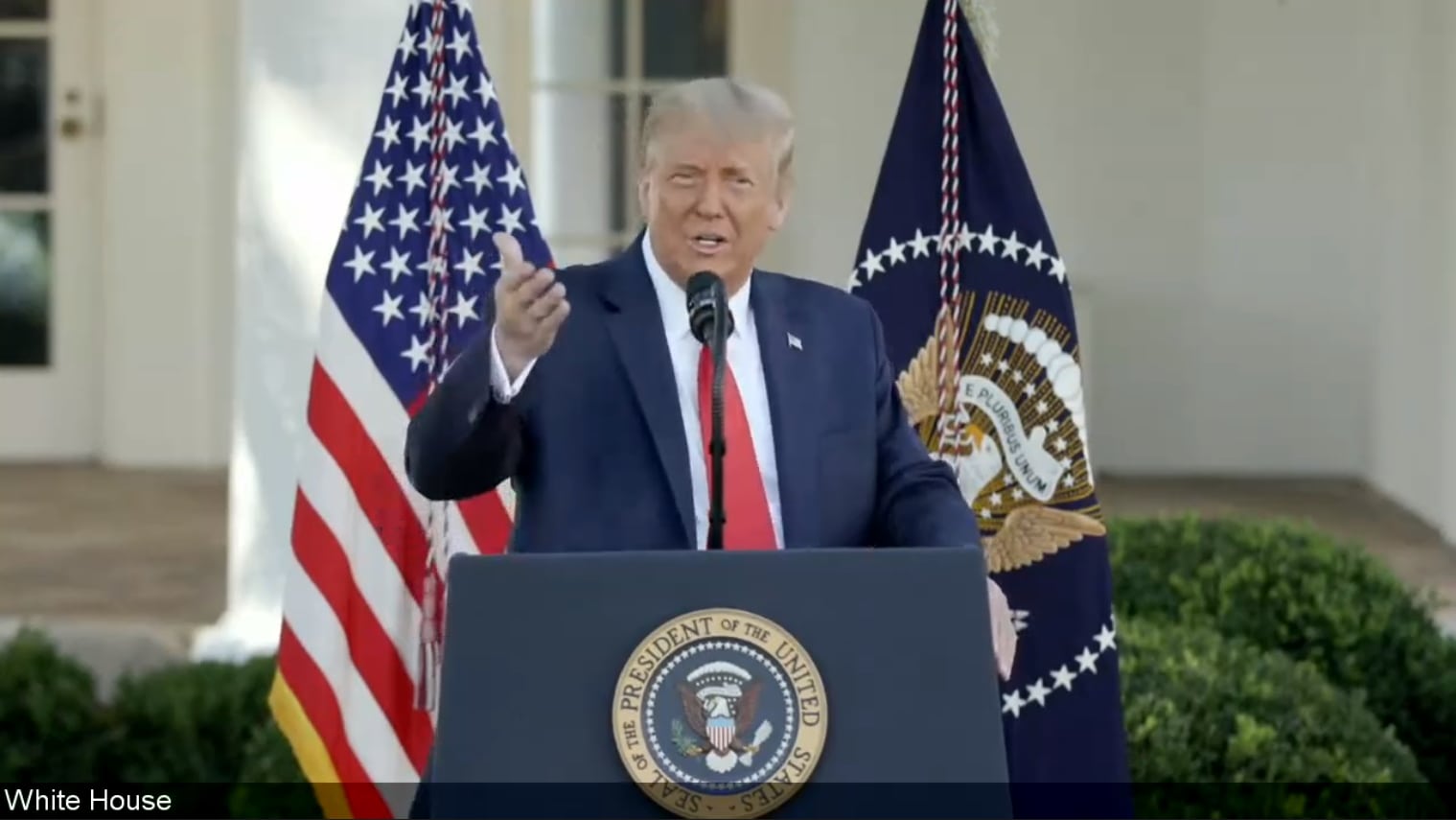 The President has made a point to campaign in person even as he recovers from COVID-19.

America has a choice between historic prosperity or crippling poverty under socialist policies, President Donald Trump said in a virtual campaign speech Wednesday.

As the President recovers from COVID-19 with less than three weeks until Election Day, he’s made a point to hit the campaign trail in person. But Thursday’s virtual event, in which he spoke from the White House Rose Garden, was a change of pace.

He addressed members of the Economic Club of Florida and other clubs nationwide, including in key battleground states like Michigan and Pennsylvania, while making his case that four more years of a Trump administration is the only way for the nation to return to its pre-pandemic economy.

The country faces a choice between “historic prosperity under my pro-American policies or very crippling poverty and a steep depression under the radical Left” and lambasted what he called Democrats’ socialist policies.

“Simply put, it’s a choice between a socialist nightmare and the American dream,” Trump said.

During the event, which was also streamed to economic clubs in New York, Chicago and Washington, D.C., the President tried to make an emotional appeal to Democrats to back his economic policies.

“I know I’m speaking to some Democrats, and some of you are friends of mine. You will see things happen that will not make you happy,” he said. “I don’t understand your thinking, I don’t understand how you can be backing such policies, but you’re wrong. I can only assume it’s habit.”

Fielding questions from Economic Club of Florida Chair Cindy O’Connell and Economic Club of Washington, D.C. President David Rubenstein, he emphasized the struggling tourism and hospitality industry. The President also noted that, while vaccines would play a large role in their return, rounding the corner on the pandemic could bring them back without a vaccine. Those industries are prime for a recovery deal.

Last week, the President returned to the negotiating table with Democratic leadership over a stimulus package, after briefly delaying it until after the election. But House Speaker Nancy Pelosi has said Trump’s proposed $1.8 trillion aid package isn’t enough and gives too much discretion to himself.

“I’d like to see the Democrats loosen up a little bit,” Trump said Wednesday. “All they want to do is bail out their badly-run cities and states.”

And the President railed against “unscientific lockdowns,” reiterating his refrain that the mitigating measures cannot be worse than the pandemic itself. Lockdowns decimate livelihoods and lead to suicide, drug overdose, depression and worsened medical outcomes in general, he added.

Trump has tried to pin the pandemic and economic fallout on China, dubbing the coronavirus the “China Virus.” The President and Republicans have tried to tether Democratic presidential nominee Joe Biden to past multinational agreements and trade deals blamed for an exodus of manufacturing jobs across the Midwest and have painted him as weak on China.

“If this administration — if I — don’t get elected in a little while, 20 days, China will own the United States,” Trump said.