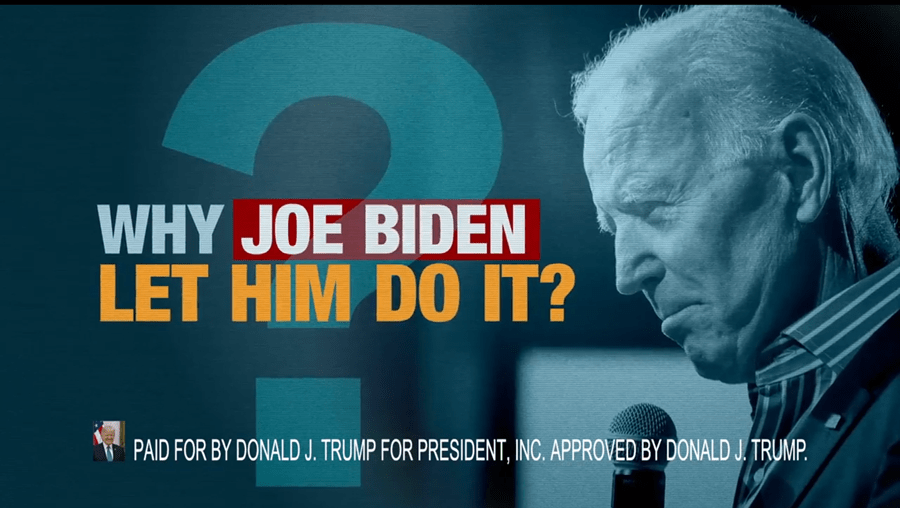 The President’s reelection campaign continues to bet on its message that Democratic nominee Joe Biden and his son Hunter Biden are compromised due to the latter’s business relationships and the father’s name facilitating them.

For the second day in a row, the Donald Trump campaign dropped new creative slamming the father and son duo, recycling hits from an ad that dropped on Wednesday.

The tersely titled “Question,” a thirty-second spot, says “the question is not why Hunter Biden used his name to get these gigs, but why Joe Biden let him.”

The claims will be familiar to those who follow conservative media.

Biden the younger “joined the board of a corrupt Ukrainian energy company for over $83,000 a month while Joe Biden was Vice President.”

“In China,” the stentorian male narrator continues, “Hunter landed a $1.5 billion business deal from the state-controlled Bank of China.”

From there, the spot asserts illicit dealings between Hunter Biden and a Romanian businessman “convicted of massive corruption.”

Biden addressed these issues in an interview last year with ABC News, saying he erred “in the grand scheme of things” for failing to see the political repercussions for his father.

But he adds, “Did I make a mistake based on some ethical lapse? Absolutely not.”

Hunter Biden also acknowledged that he likely would not have been named to the board of a foreign company if his last name weren’t Biden.

“I don’t think there’s a lot of things that would have happened in my life if my last name wasn’t Biden,” he said.

The spot the Trump campaign pushed out Wednesday made use of that pull quote, covering similar terrain.

The Hunter Biden issue has become a flashpoint on the right, not least of which for unprecedented censorship of the story from the New York Post by social media companies themselves.

Twitter and Facebook have restricted the content, roiling conservatives and Republicans from the President downward, who have claimed that the social media giants are unfairly gaming the election.