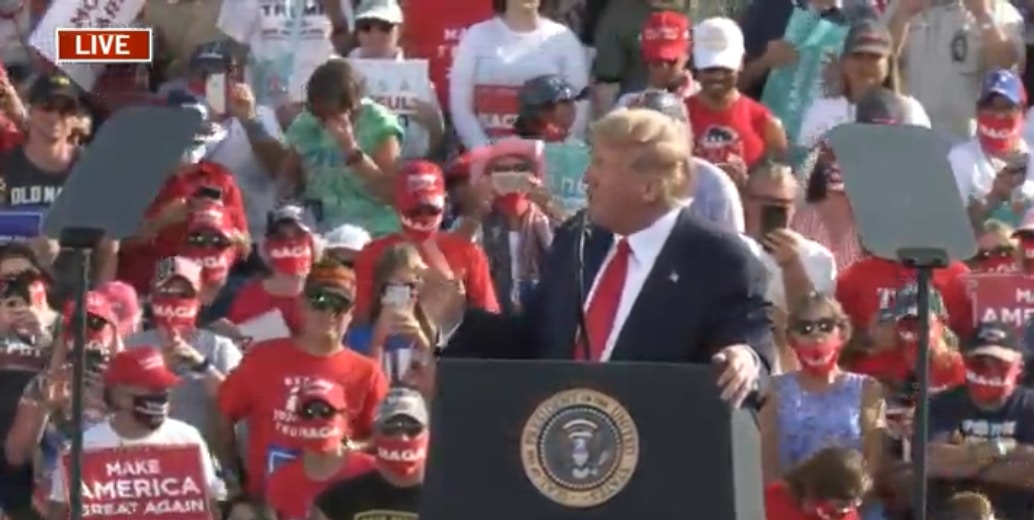 U.S. President Donald Trump rallied thousands in Ocala Friday, pressing his argument that the Bidens are singularly corrupt and would sell America out to China.

The President, fresh off a seniors event in Fort Myers in which he compared Hunter Biden to a “vacuum cleaner” for the larger Joe Biden “crime family,” continued his critique of the Biden campaign and what he sees as a host of institutional enablers, including the “fake news” media itself.

Trump said Biden was the “embodiment of the corrupt political class,” noting that Biden did not get one question about it in his 90 minute town hall Wednesday.

“It’s incredible,” Trump said, before chants of “Lock him up” filled the air.

“Thousands and thousands of people,” estimated Trump, were at the rally, a presage of a “red wave the likes of which they’ve never seen before.”

Biden is a “servant of the wealthy donors and globalists … they sold you out big,” Trump said. “One act of treachery after another”

“This week we learned … that Joe Biden has lied about his involvement in his son’s blatantly corrupt business dealings,” Trump said. “This is a guy that got thrown out of the military. No Job. As soon as this guy became Vice President, he became a vacuum cleaner for the family.”

If Biden won, Trump vowed China would “own the United States.”

“The Biden family is a criminal enterprise. They sort of make Hillary Clinton look like amateur hour.”

The President’s campaign and political allies clearly sees an opening with the developing Hunter Biden story, a narrative which they hope can restore the 2016 narrative dynamic where Trump positioned himself as an outsider set to, as he put it, “drain the swamp.”

Earlier in the day, Trump pledged to deliver a COVID-19 vaccine to many senior citizens free of charge through a partnership with two major pharmacy chains.

The president also has said he would have vaccines available to the public by the Nov. 3 election. But it appears unlikely that goal will be met.

On Friday, it was reported that one of the companies working on a vaccine, Pfizer, would not seek authorization to use its vaccine until the third week of November. And even if vaccines were available, it’s not clear Americans, especially older ones, would get vaccinated. For example, a CNN poll conducted Oct. 1 to Oct. 4 showed that 51 percent of respondents said they would try to get the vaccine if it were widely available and at a low cost, down from 56 percent in August.

Trump’s announcement came during one of two stops to Florida, an important battleground state. Trump will likely be unable to win a second term if he loses the state. He won Florida in 2016 by nearly 113,00 votes.

The news about the vaccine partnership also came as states were required to submit draft plans to the federal government about how they will distribute a coronavirus vaccine when one is approved for public use.