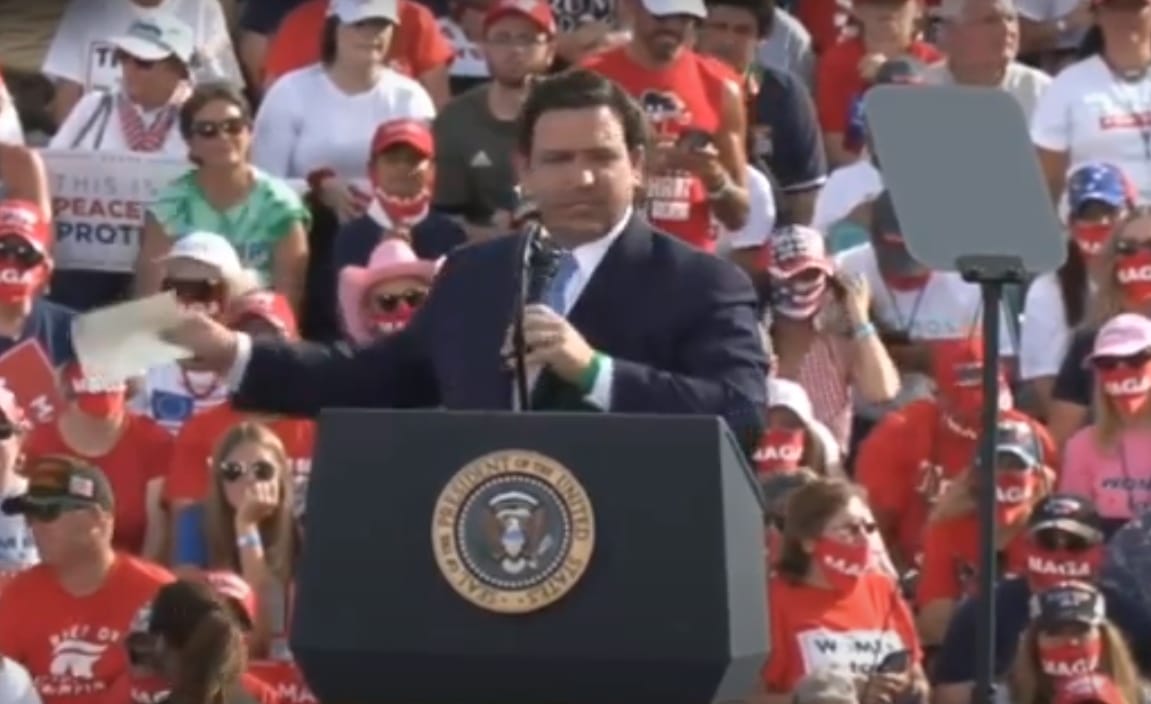 Whining Democrats, rioters, lockdowns and the media again fall in the Governor's crosshairs.

Ahead of President Donald Trump disembarking in Ocala to address a crowd of adoring fans, Gov. Ron DeSantis reheated his rallying cry against Democrats and the media Friday.

Trump’s rally at the Ocala International Airport was yet another appearance in Florida this week and his third in the last 24 hours. On Monday, DeSantis issued Trump’s introduction, calling Democrats whiners, railing against rioters and lockdowns, and bemoaning the mainstream media.

Again Friday, the Governor took on Democrats for calls from some members of the party to add justices to the Supreme Court if Republican Senators approve Court nominee Judge Amy Coney Barrett.

“There should be no more debate. It’s time for the Senate to confirm her and fill that seat,” he said.

The Governor compared Democrats’ reactions to that of his 3-year-old daughter when he beats her in Candyland.

“If I win, she gets really upset and she cries, and I tell her, Madison, if you lose, you can’t cry. You’ve got to just try to win next time,” DeSantis said.

Democratic presidential nominee Joe Biden has refused to answer whether he would approve legislation to pack the Court. When asked in recent weeks, he has said his answer would distract voters from Trump and that people would know his stance after Election Day.

But during a townhall with ABC Thursday, the former Vice President changed his message, saying he would tell people before Election Day.

“Joe, why won’t you answer the question? Yes or no?” DeSantis said. “Don’t tell me that the people don’t have a right to know before the election.”

The Governor also said the President’s challenger would force social distancing lockdowns, which he has deplored as “unscientific.”

“Lockdowns don’t work, and our country cannot afford to be shut down, so no thank you, Joe Biden,” DeSantis said.

Again the Governor rekindled Trump’s law and order message against violent protests that has drawn support from law enforcement officials.

“In June, when our cities were ablaze, the President stood up for law enforcement. Joe Biden was nowhere to be found,” he said. “In fact, they had some of his campaign workers, Kamala (Harris), they were raising money to bail out the rioters from jail.”

DeSantis referred to anticipated legislation for the next Legislative Session that would increase penalties for violent protesters and allow the state to cut funding to local governments that reduce the budget of their police departments.

“Which says, very clearly, if a locality defunds law enforcement, the state is going to defund you,” he said.

Before departing the state, the Governor squeezed in a jab against the mainstream media and predictions that Biden will win on Election Day.

DeSantis has been a staunch defender of Trump since the Governor’s days in Washington. The President’s endorsement in 2018 catapulted the then-Congressman to the Republican gubernatorial nomination and then the Governor’s Mansion.

Trump recalled the conversation the two had regarding the endorsement:

“I said, alright Ron, I’m going to endorse you. Who the hell knows what’s going to happen? Boom, I pressed it, he went from three to 71 in one day.”

“The only one better is his great First Lady,” the President added, complimenting Casey DeSantis. “I like her even better than that.”

But it wouldn’t be the last time he shouted out the Governor in an off-script moment. The President mentioned several requests DeSantis had made since taking office in 2019, including hurricane relief and environmental funding for Lake Okeechobee.

However, the President had his own favor to ask with 18 days till Election Day.