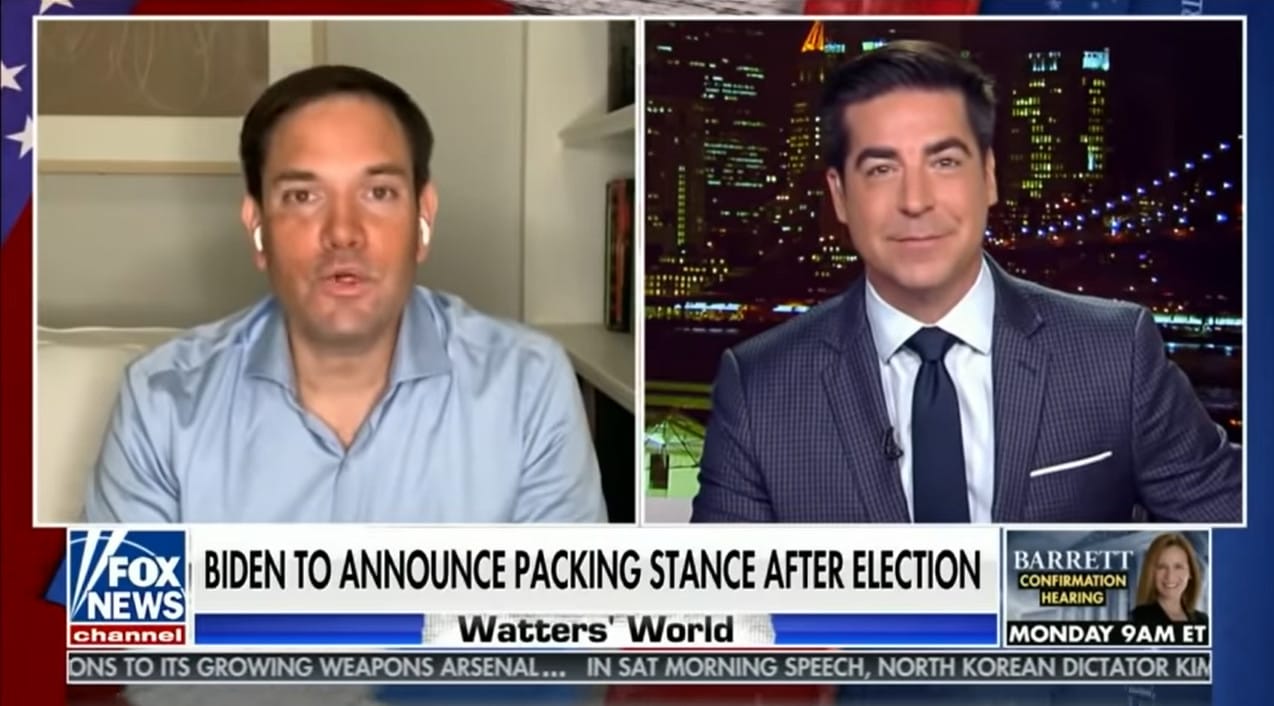 'We know exactly what he’ll do because his radical base demands it.'

U.S. Senator Marco Rubio will not back down from his contention that a Democratic President would expand the Supreme Court.

The second-term Republican, writing for Fox News on Monday, argued a Joe Biden administration “packing the court” was the “dirty little secret” Democrats and the Biden campaign didn’t want to disclose.

“You don’t need to wait for Democratic presidential nominee Joe Biden’s long-promised and still-elusive answer to know that a Biden administration would sign legislation into law allowing them to pack the Supreme Court with left-wing activists,” Rubio asserted.

“The former Vice President can dodge the question for another 15 days, but we know exactly what he’ll do because his radical base demands it,” Rubio said. “And here is the dirty little secret that Democrats do not want the American people to know: it has always been their plan to pack the Supreme Court with liberal judges.”

Biden has said he’s “not a fan” of court packing, but has dodged a definitive answer on the question. The candidate won’t make any public appearances until Thursday’s debate with President Donald Trump, so the question likely won’t be resolved.

Instead, it’s rooted in a desire among the left to impose a radical agenda, aided and abetted by a left-of-center judiciary steeped in activist tendencies that are pure anathema to the Senator, Rubio said.

“This is about more than our institutions — it is about what happens to our country, our communities, and our way of life if the radical left and the Democratic Party destroy them. It is clear they don’t want to pack the Supreme Court just to cancel out the votes of Justices Clarence Thomas, Samuel Alito, Neil Gorsuch, Brett Kavanaugh, and soon Amy Coney Barrett. They want to pack the Court to cancel out your ability to resist their radical agenda.”

The Senator has not been shy in denouncing “court packing” schemes, calling them “third world” in a recent interview.

“I want people to understand, this is not going to end at nine or — I mean, we can have a Supreme Court one day that has like 15 or 18 people, 19 people every time some party gets elected, and you don’t like the makeup of the court, you just add, you know, two more people to it. I mean, that’s what they do in the third world. That would be ridiculous,” Rubio told Fox News host Jesse Watters earlier this month.

The Senator speculated then that the court packing push may happen over the objections of Biden himself.

“I think Joe Biden, because he has been there for so long, he’d prefer not to, but he has no choice,” Rubio said.

previousSunburn — The morning read of what’s hot in Florida politics — 10.19.20