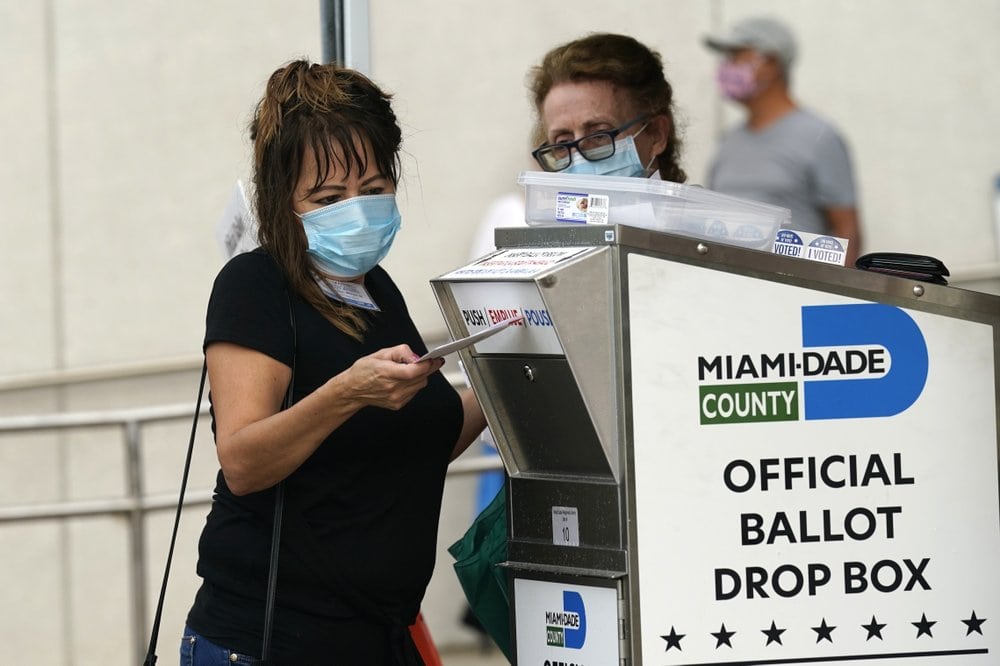 There were no major issues reported on the first day early voting sites could open.

Republicans and Democrats put a focus Monday on early voting, as Floridians in 52 counties lined up to cast ballots in the Nov. 3 general election.

People arrived hours early to cast ballots in Sarasota, Jacksonville, Naples, Tallahassee and Miami, with no major issues initially reported on the first day that early voting sites could open.

Democratic political consultant Steve Schale on Monday said he expects early voting to be more heavily Republican than normal, but it should take a week before there is “a real sense of things.”

“Republicans traditionally do a little better during the week, and Democrats have better weekends,” Schale advised people on his email list. “So while there will be a temptation to draw big conclusions from today, I would urge caution until we get more data.”

Republicans are expecting big numbers in early voting as their traditional advantage in mail-in ballots has slipped this year, with President Donald Trump decrying vote-by-mail processes in other states as being ripe for fraud.

Democratic vice-presidential candidate Kamala Harris flew into Orlando for the first of two appearances that highlighted the start of the nearly two-week early voting process. All counties must offer early voting from Oct. 24 to Oct. 31, but they could start as early as Monday and extend until Nov. 1.

During her mid-day campaign stop in Orlando, Harris alluded to legal battles popping up in various parts of the country about voting issues.

“We know when someone see is trying to pull the wool over our eyes, trying to discourage us, trying to deflate our enthusiasm, trying to suggest to us that we don’t matter, we can see that,” the California Senator said. “That’s not new to us. And in the face of these moments, we ask ourselves a question, why are so many powerful people trying to get in the way of us voting? Why are these powerful people trying to suggest we can’t trust the system, putting in place laws that are designed to suppress the vote, trying to purge the voter rolls, trying to make it difficult? Why are they doing that? And the answer, of course, we know is this: Because they know, when we vote, we win. When we vote, we change things. We make it better.”

The Republican Party of Florida issued a news release Monday saying it expects hundreds of thousands of Republicans to use the early voting process.

Party Chairman Joe Gruters pointed to his party’s registration gains over the past two years as a sign Republicans will keep Florida red.

“There is no doubt in my mind that Republican voters are enthusiastic, energized and excited about keeping Florida red and that excitement is not only contagious but palpable,” Gruters, a state Senator from Sarasota, said in a prepared statement. “The leadership shown by President Donald J. Trump and our Governor Ron DeSantis during this past year has further solidified the choice that will be made by Republican voters all across the Sunshine State.”

The state Division of Elections reported last week that more than 14.4 million Florida are eligible to vote in the Nov. 3 contest, with the Democratic advantage in registered voters over Republicans narrowed to 134,242.

Four years ago, Democrats accounted for 37.9% of the registered voters, while 35.4% were Republicans and 24.02% were independents.

In the new count, Democrats make up 36.7% of the voters, Republicans are at 35.8% and independents account for nearly 26%.

After campaigning in Orlando, Harris went to Jacksonville, where she stopped at a public-library branch to greet people who were voting early.

“It is so important,” she told people who had just cast ballots. “Thank you for voting early.”